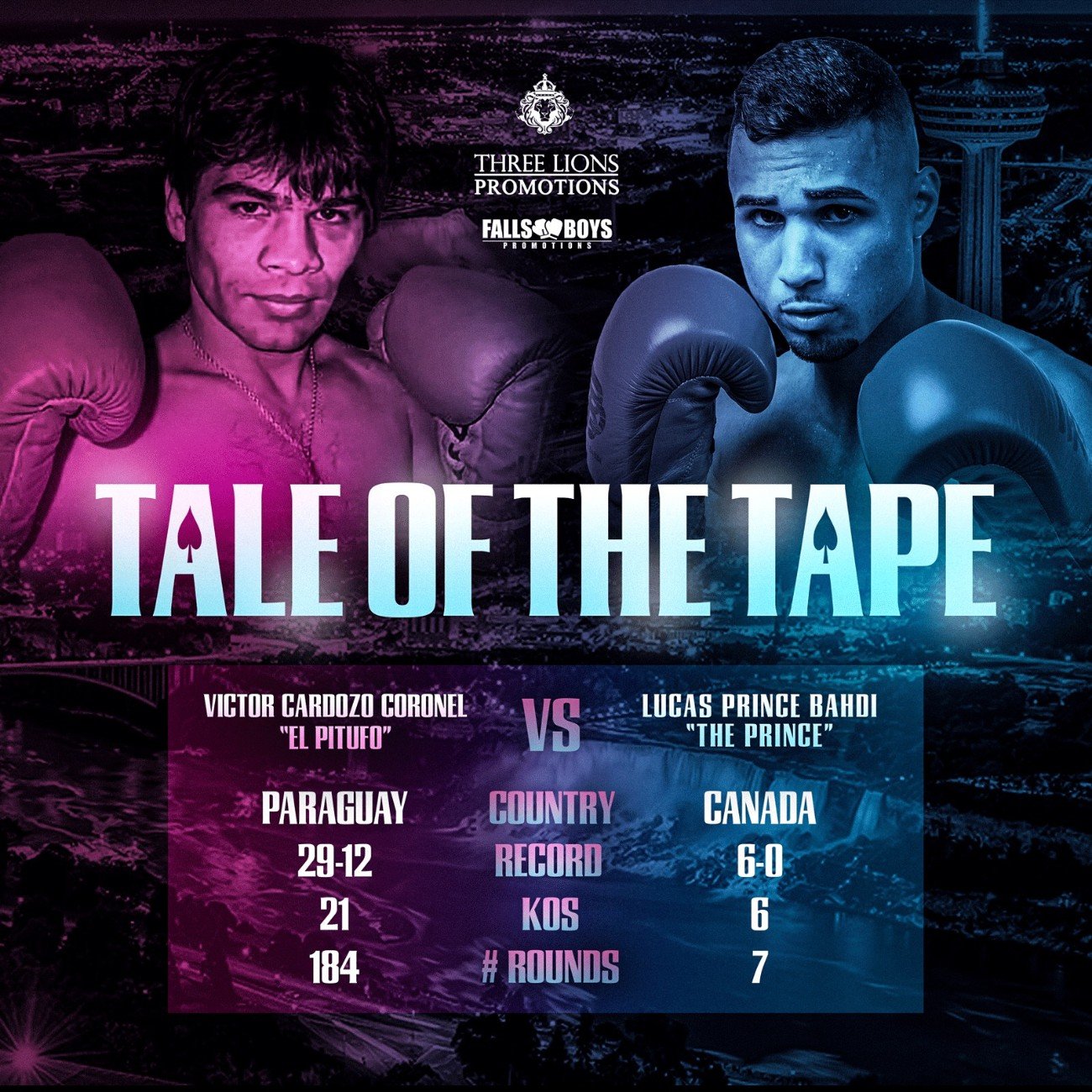 To be the best, a fighter must beat the best. This is the rationale behind the matchmaking for Lucas “Prince” Bahdi’s (6-0-0, 6KOs) return on November 23 at the Sheraton on the Falls in his hometown of Niagara Falls, Ontario. Falls Boys Promotions (FBP) and Three Lions Promotions (TLP) are cranking Bahdi’s opposition up a notch for his much anticipated homecoming, putting the former Canadian amateur champion against two-division Paraguayan champion Victor Cardozo (29-12-2, 21KOs) of Puerto Antequera for eight rounds or less.

“Cardoza will fall like the rest,” said Bahdi. “Yes, he’s faced some tough guys, but no one with the skill, power, and pedigree that I bring into the ring. Match me with whoever you want. The outcome will be the same. No one can take what I dish out. I’m different than other lightweights and I showed that again last weekend. I’m the hardest hitting lightweight in the world, I’ll stop Cardoza just like I stopped everyone else.”

This past Saturday, Bahdi took on his sixth opponent in as many months, flattening Victor Manuel Campos (6-9-0, 2KOs) in under a round at the Peterborough Memorial Centre. Campos isn’t alone. No fighter has endured more than a round with Bahdi since his pro debut, when Luis Yan Revilla made it into the second before succumbing to Bahdi’s heavy right hand. If Cardozo stays even seven rounds with Bahdi, he’ll take the young prospect further than his last six opponents combined. FBP President Robert Penev is hopeful that Cardoza will be the challenge Bahdi needs.

“We need him to be tested, it’s as simple as that,” explained Penev. “He’s absolutely crushing guys that other fighters typically get some rounds against. We love to see Lucas thrilling the crowd, and we love to see him dominating, but its our job to make sure he continues to grow. That comes with adversity. Cardozo always brings adversity, one way or another.”

Cardozo is a rugged, all-action fighter, known for either scoring a knockout or suffering one himself. He’s played the underdog before, nearly upsetting Mohamed Yassa (18-2-0) for a minor world title in Algeria. Cardoza dropped Yassa in the second round, but was deducted a point for headbutting shortly thereafter. Luckily for Yassa, Algeria permits the exceedingly rare practice of referee-only judging for twelve round contests, resulting in a single, 117-113 scorecard in his favor. It’s these sorts of experiences that Cardoza believes will give him an edge over Bahdi.

“I was very surprised that he and his team accepted this fight,” said Cardoza. “Lucas has only been a pro for a few months now. He only has a handful of rounds under his belt. My experience will definitely prevail. There is nothing Lucas can show me that I haven’t seen before, but I will certainly be showing him a thing or two.”

“Styles make fights and our last show proved this,” said TLP Directing Manager Dan Otter. “Bahdi has his hands full this time around. How he performs against someone like Cardoza will tell us a lot about where he stands internationally.”

On Saturday, November 23, Falls Boys Promotions (FBP) and Three Lions Promotions (TLP) present the return of amateur standout and undefeated professional Carolyn Redmond (1-0-0) of Guelph against Gisela Noemi Luna (0-3-0) of Buenos Aires, Argentina, at the Sheraton on the Falls in Niagara Falls, Ontario. The fight is scheduled for four rounds or less in the welterweight division.

Redmond made her successful professional debut in September, stopping Veronica Diaz Marin (0-4-0) via TKO3 at the Hamilton Convention Centre. Redmond was also a decorated amateur, amassing 75 fights and multiple provincial crowns.”Carolyn is one of the top prospects in nation,” said TLP Managing Director Daniel Otter. “It’s great to be working with her again for Niagara Falls. She thrilled the fans in Hamilton with a high work rate and hard, accurate punching. I expect nothing less this time around. She always brings the fight.”

Luna is no stranger to Canadian fight fans. Back in March, she battled Tanja Ovsenik (3-0-0, 1KOs) for the four round distance in Toronto, dropping a hard fought unanimous decision.