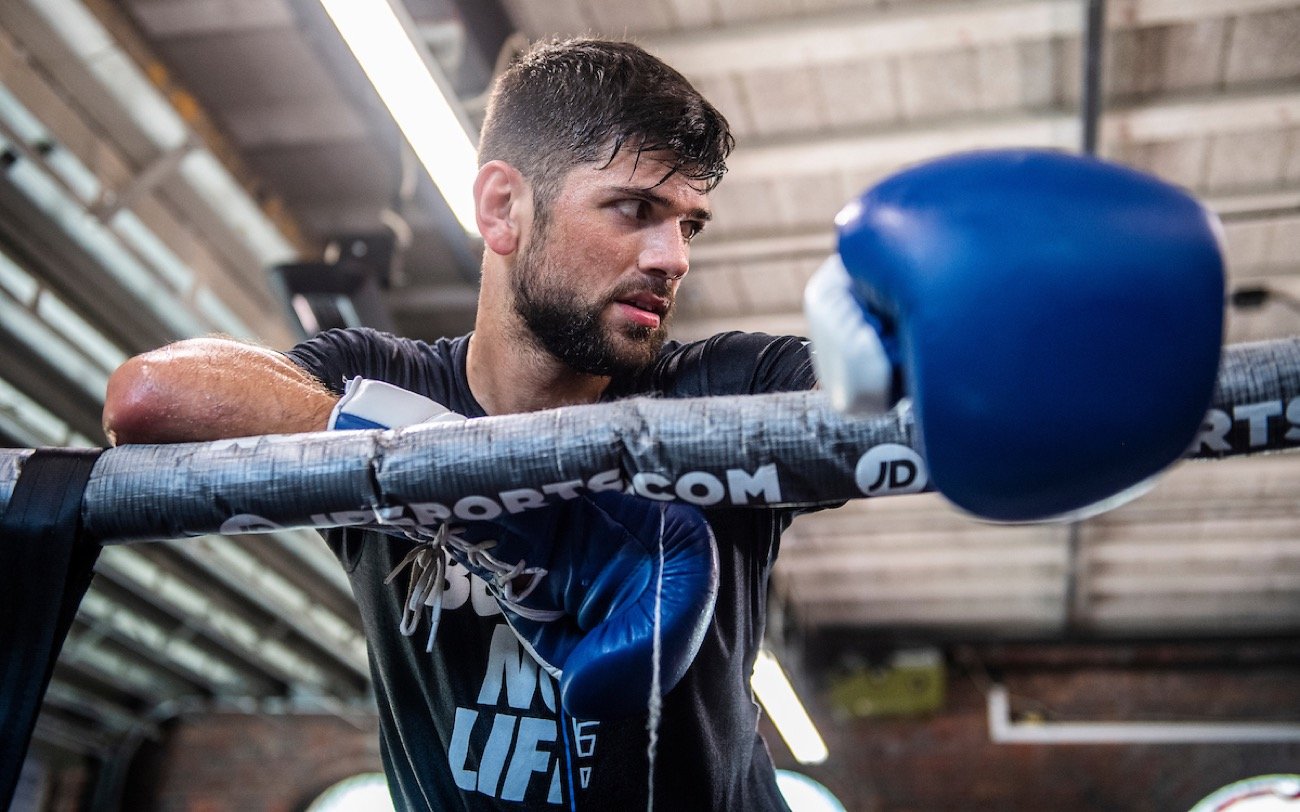 Charlie Edwards will make the second defence of his WBC Flyweight World title against his Mandatory Challenger Julio Cesar Martinez at The O2 in London on Saturday August 31, live on Sky Sports Box Office in the UK.

Edwards ripped the WBC 112lbs crown from Cristofer Rosales on an emotional night at The O2 in December, outclassing the Nicaraguan with a masterful display to take a well-earned unanimous decision in his second World title attempt.

He turned on the style as he successfully defended his World title for the first time against Spain’s Angel Moreno at the Copper Box Arena in March, winning every round against his former sparring partner in a dominant display.

Martinez, hailing from Mexico City, landed his shot at the coveted green and gold belt by taking out highly-rated Welshman Andrew Selby in five rounds in their Final Eliminator bout earlier this year in March.

It was a first career loss for Selby, who was once regarded by many as one of the brightest prospects in the UK. A brutal left hook liver shot ended proceedings in the fifth session to set up a first World title shot for Martinez.

Losing on his professional debut in October 2015, ‘El Rey’ has since won fourteen fights on the bounce, scoring eleven knockouts in that impressive run. Halting Selby means no opponent has gone more than six rounds with the 24-year-old since June 2017.

“He’s a very tough Mexican who can bang with both hands,” said Edwards. “His record shows that he’s a massive puncher and we saw that in his last fight against Andrew Selby. He got him out of there in the fifth round and was hurting him on a number of occasions. He’s coming to bring it and he’s going to try and rip that WBC title off me. This is his World Cup final.

“He’s going to put it all on the line. He’s going to be coming hard and fast from early to try and put me under pressure, but I believe my boxing skills and the experience that I’ve gained throughout my short pro career will see me through. I expect to have a punch perfect performance. I believe that he will bring out the very best in me.

“Timing is everything, I believe this is my era. I have arrived at my destination at the right time and I’m loving the journey. This is another legacy fight for me, and I believe that I will build a great legacy. To fight your Mandatory Challenger on one of the biggest cards in British boxing this year is brilliant because it showcases my skills around the world.”

“I can’t wait to challenge for the WBC Flyweight World title in London,” said Martinez. “I’ll be taking that famous green and gold belt back to Mexico with me. I have already knocked out one Brit and on August 31 I will make it two.”

Promoter Eddie Hearn said: “This is another great fight added to a brilliant card at The O2. We saw Martinez knock out Andrew Selby recently in his Final Eliminator and he is an aggressive, fearless fighter who will be coming to try and take Charlie’s belt. Charlie is now established as the best 112lb fighter in the World right now and I expect another brilliant performance from him at The O2. This will be a fast paced, explosive fight and there’s still plenty more to come on this card!”

Adam Smith, Head of Sky Sports Boxing, said: “Charlie Edwards has been an enthralling success story in British boxing and it’s fantastic to add his next WBC title defence to the Vasiliy Lomachenko-Luke Campbell bill.

“Charlie has grown as a fighter since claiming the WBC belt on that emotional night last December, but Julio Cesar Martinez is a real danger-man as shown in that win over Andrew Selby.

“We also have Hughie Fury’s heavyweight clash against Alexander Povetkin on an action-packed evening, with more fights to be added before Luke Campbell’s epic World title battle with Lomachenko.”

CORDINA FACES GWYNNE IN WELSH BATTLE AT THE O2

Joe Cordina (Picture By Andrew Timms) will defend his British and Commonwealth Lightweight titles against Gavin Gwynne in a mouth-watering battle of Wales on the undercard of Vasiliy Lomachenko vs. Luke Campbell at The O2 in London on August 31, shown live on Sky Sports Box Office in the UK.

Cordina stopped Andy Townend inside six rounds to add the British title to his Commonwealth belt at The O2 in April. The undefeated ‘Welsh Wizard’ outclassed his experienced opponent from the first round and dropped the Barnsley boxer three times in the sixth round to extend his record to nine straight wins with his seventh knockout.

Gwynne, a former St Joseph’s stablemate of Cordina, is undefeated in eleven professional fights and picked up the Welsh Lightweight title against Henry Janes in December 2017. The Newport fighter, trained by Tony Borg, lands his second title shot after outpointing Derby’s Myron Mills in a Final Eliminator for the British title in his hometown.

“I’m glad to be making the first defence of my prestigious British title on a huge night of boxing at The O2 on August 31,” said Cordina. “The British and Commonwealth titles are important belts to add to my collection on my route to World title glory and I intend to defend them in style against Gavin Gywnne later this month.

“It’s brilliant to be sharing a bill with Vasiliy Lomachenko and Luke Campbell as they both bid to become the number one Lightweight on the planet and I hope to be fighting for that honour myself in the future. I know Gavin from my amateur days and I’m expecting him to give his all to take my titles from me but they won’t be going anywhere.”

“I was absolutely delighted when I found out I’d have the opportunity to fight for the British and Commonwealth titles,” said Gwynne. “Being on the undercard of pound-for-pound number one Vasiliy Lomachenko is even better so it’s a massive night for me. When I first turned pro winning the British title was my only ambition. Winning these titles would mean the World to me.

“Joe is a former Olympian and Team GB star so he’s going to be the favourite going into this fight but me and Joe have sparred rounds in the Welsh squad and I think over twelve rounds I’ll have too much for him. Especially at Lightweight, I’m going to be the much bigger guy in there.

“Joe is a very skilful boxer and he looks like he’s picked up a bit of power as well in his last couple of fights, but I’m confident of getting the win on August 31. Whoever wins the fight will pick up the titles and have the bragging rights in Wales so there’s plenty on the line here.”

Joe Cordina says Gavin Gwynne is in for the “shock of his life” when the Welsh rivals square off for the British and Commonwealth Lightweight titles at The O2 in London this Saturday, shown live on Sky Sports Box Office in the UK.

Cordina stopped Andy Townend inside six rounds to add the Lonsdale Belt to his Commonwealth crown in Greenwich earlier this year. The unbeaten Cardiff stylist outclassed his experienced opponent from the first round, dropping him three times in the sixth round to extend his record to nine straight wins with his seventh knockout.

Standing at 6ft tall and having boxed at both 135 and 140lbs, Gwynne will be the naturally bigger man on the night, but with a wealth of experience in his years in the amateur code, Cordina says this is nothing new and is unfazed by his opponent’s size advantage.

“I bring the right sparring partners in all the time, it’s not the first time I’ve fought someone who’s been six foot,” said Cordina. “I’ve been boxing fighters who are long and rangy and taller than me since the amateurs. I’ve had sparring partners for this fight who are the same height and probably technically better than Gavin, I’ve got an answer for everything he brings.

“All I’ve been hearing is how fit he is, and will I be able to handle the pace or whatever, this is my third fight scheduled for 12. I’ve trained for 12 rounds even when I was boxing in ten round fights. Gavin has only boxed ten rounds twice and he blew a gasket. When he’s got someone who is going to fight with him and will catch him you will see how he copes with that. Let him think what he wants, he will have the shock of his life. I have to win, and I have to do it in style.

“We only sparred once and you can’t take too much from that as it was four rounds. It was five years ago so it’s irrelevant. This isn’t about bragging rights for me, my goal is to become a World Champion. If I win, I move on and I’ll never look back at him again. If he’s thinking about bragging rights then his ambitions clearly aren’t that big. For me, it’s about winning to get closer to my goal.”

Cordina vs. Gwynne features on a huge night of boxing in the Capital.