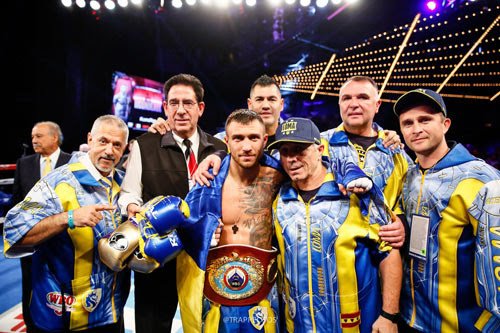 History was made at Madison Square Garden on December 9th as it marked the first time in boxing that two-time Olympic gold medalists fought each other as professionals. WBO junior lightweight champion Vasily “Hi-Tech” Lomachenko defeated WBA super bantamweight champion Guillermo “El Chacal” Rigondeaux via 6th round TKO in a bout televised live on ESPN.

Prior to the bout both fighters agreed to donate their fight gloves for display in the Hall of Fame and, following the contest, Hall Executive Director Edward Brophy was center ring to accept the gloves. Also, at the post-fight press conference, Lomachenko surprised the Hall of Fame by presenting his fight-worn boxing trunks for display as well.

“The Hall of Fame’s mission is to honor and preserve boxing history and we were thrilled that two of the most decorated Olympic boxers of all time donated their gloves to the Hall,” said Hall of Fame Executive Director Edward Brophy. “This was the first time that gloves went from the boxers’ fists to the Hall of Fame in the ring immediately after a bout.”

The bout, for Lomachenko’s 130-pound title, headlined an all-action card presented by Top Rank, in association with Roc Nation Sports and Madison Square Garden. The card was televised live on ESPN and ESPN Deportes and was watched by an average of 1.73 million viewers.

For more information please call the Hall of Fame at (315) 697-7095, visit online at www.ibhof.com, on Facebook at www.facebook.com/International BoxingHallofFame and on Twitter at www.twitter.com/BoxingHall.