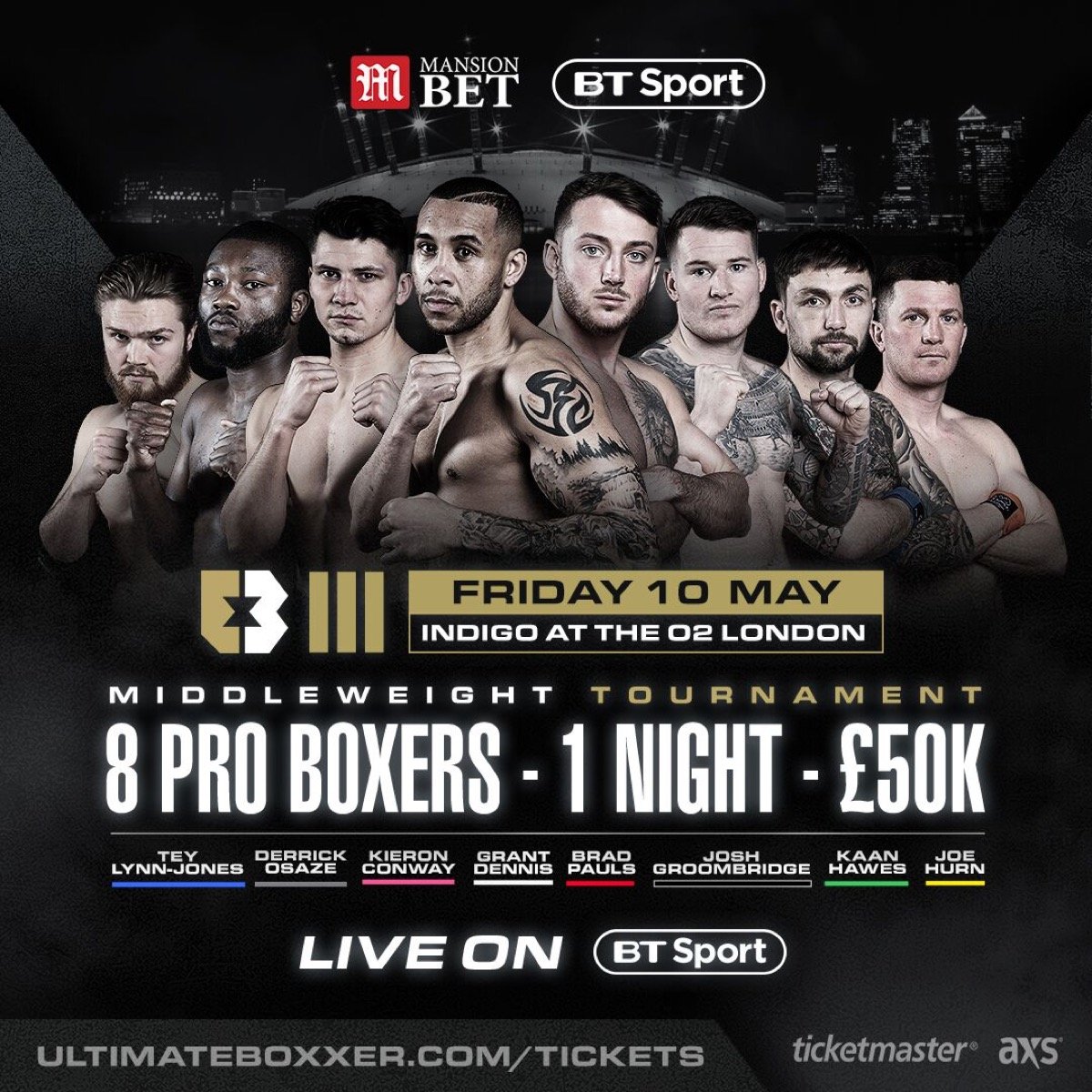 Ultimate Boxxer are delighted to announce that tomorrow night’s event UB III, sponsored by MansionBet, at The Indigo at The O2 is now SOLD OUT!

Every ticket has gone ahead of the third instalment of the one night elimination tournament in the hard-hitting middleweight division and the only way to see the action now is exclusively live on BT Sports, BT Sports’ You Tube channel – available to anyone to watch for free – and the dedicated boxing channel BoxNation.

The Ultimate Boxxers weighed-in officially today at The Indigo ahead of their showdowns tomorrow night that will see one man crowned the Ultimate Boxxer and walk away with a large share of the £50,000 prize money and Golden Robe.

The eight middleweights who will fight it out in search of glory in UB III are:

1. JOE HURN, Clacton, Essex, 10-0-1 (6)
Short Colour: Yellow
Built like a brick, the big puncher from Essex is aiming to blast his way through the fights. Has struggled for opportunities despite being highly rated. This is the type of fighter Ultimate Boxxer will help.

3. DERRICK ‘THE PUNCHING PREACHER’ OSAZE, Peckham, London, 6-0-0 (1)
Short Colour: Grey
Unbeaten in six fights, the Londoner has an unusual background. He as an ordained minister committed to a life of non-violence. He goes by the name of the “Punching Preacher”.

4. GRANT DENNIS, Former Southern Area Champion, Chatham, Kent, 12-1-0 (2)
Short colour: White
The ‘Go Getter’, a former Southern Area Middleweight Champion needed just 48 seconds to score a stunning KO victory in his last fight out. Has been unlucky not to go further with his only loss coming in a British title fight and will be looking at this event as his chance. Coming into the competition as the oldest competitor.

5. KEIRON CONWAY, Northampton, Northamptonshire, 10-0-0 (3)
Short colour: Pink
Tipped as the favourite. This undefeated hot-shot has tasted the high-life after featuring on the an Amir Khan undercard. He is now ready to make his move in the division.

7. SEAN PHILLIPS, Surrey, 6-0
Short Colour: Red
Training out of the famous Peacock gym. The young, unbeaten, 22 year old has been tipped for a bright future under the watchful eye of top trainer Martin Bowers.

8. KAAN HAWES, Witham, Essex, 5-0-1
Short Colour: Green
No losses on his record and relatively unknown. Learnt his trade on the white collar scene after a previous career in professional football. He is an outsider with a big fanbase…Stranger things have happened…

An action packed undercard will see the return of the highly-rated and undefeated Light-Heavyweight talent and UB II winner Shakan Pitters and unbeaten super-middleweight prospect Idris Virgo who is out to prove to critics he is more than just a reality star.