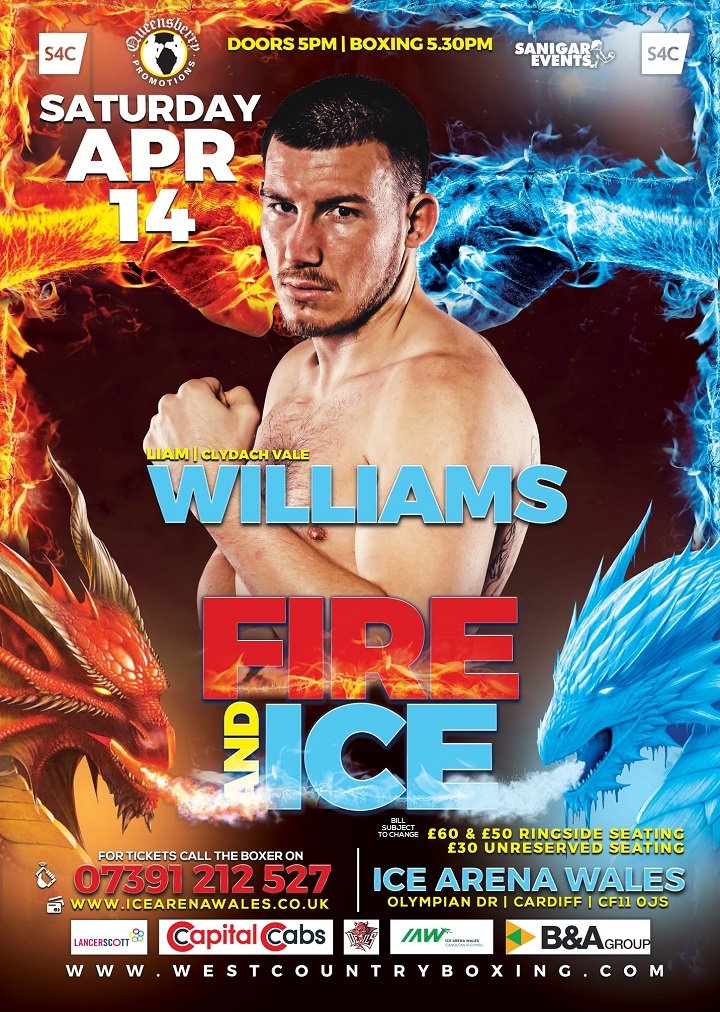 Sanigar Events and Queensbury Promotions are proud to announce that former British and Commonwealth Super Welterweight Champion Liam Williams has been added to the huge night of championship boxing at the Ice Arena Wales, Cardiff on April 14th live on S4C. Liam returns to Wales after seventeen months following massive back to back clashes with domestic rival Liam Smith. The popular fighter from Clydach Vale will box for the second time at the Ice Arena Wales, last time scoring a TKO against unbeaten Gary Corcoran in arguably the best win of his career. Williams will box in an 8 round contest against an opponent to be named shortly.

In the headline event Ashley Brace, Wales’ undefeated female contender will drop down in weight to take on Germany’s Xenia Jorneac for the vacant European super-flyweight championship. Brace fought an enthralling back and forth contest last time out that ended in a draw against Melania Sorroche for the European title at bantamweight but feels that boxing at the higher weight put her at a disadvantage:

Her opponent Jorneac is a tricky southpaw, originally from Romania but has boxed her entire professional career out of Germany. She has 8 wins on her record against just 2 defeats, both coming against undefeated opposition and is ranked number 2 in Europe. This will be the biggest test of her career so far and the chance to stage an upset and boost herself into the top 10 of the world ratings.

Former Welsh super-welterweight champion Tony Dixon will hope to become a two weight Welsh champion when he battles Pontypool’s Kieran Gething for the title at welterweight. Gething is the former amateur captain for Team Wales and has made a fast start to his professional career boxing 6 times in 13 months and has his sights set on winning the prestigious national title.

Former British title challenger Craig Kennedy is on the comeback trail and hard hitting Welsh light heavyweight champion Nathan Thorley will aim to follow up on his impressive knock out of Commonwealth medallist Jermain Asare with a big win against a top international opponent. Olympic silver medallist Fred Evans now 3 wins 0 losses will continue his accent through the pro ranks and slickster JJ Evans will box in his home city for the first time in his 6 fight career.

Promoter Jamie Sanigar is pleased to be promoting his second live show in partnership with S4C:

“This will be another fantastic night for Welsh boxing and I’m delighted we’ve secured home advantage for Ashley Brace’s second challenge for the European Title. This is Ashley’s big chance to win a major title and at the premier venue in the Welsh capital. It is great to see female boxing on the rise in the UK and Ashley can become a star for Welsh sport.

It is great to have secured Gavin Gwynne another title shot and step up the ladder against an unbeaten prospect in Ciaran McVarnock from Belfast for the Celtic title. I am pleased to have reached an agreement with Queensbury Promotions for Liam Williams to feature on the show.

You rarely see a poor Welsh title fight and Dixon against Gething is a fight that has captivated the imagination of Welsh fight fans. Its a major boost for Welsh Boxing to have secured free to air national TV on S4C once again and I believe this line up can emulate the fantastic show in December.”