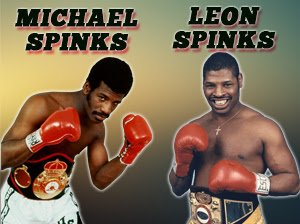 Michael Spinks captured middleweight gold at the 1976 Montreal Olympic Games. As a pro, he won the WBA and WBC light heavyweight titles before becoming the first light heavyweight champion to win the heavyweight title when he defeated Larry Holmes (W 15) for the IBF belt in 1985. Spinks retired in 1988 with a pro record of 31-1 (21 KOs) that includes wins over Yaqui Lopez, Marvin Johnson, Eddie Mustafa Muhammad, Gerry Cooney and Dwight Qawi. In 1994, Spinks was elected into the Hall of Fame.

One of boxing’s most colorful personalities, “Neon” Leon captured light heavyweight gold at the 1976 Montreal Olympic Games. He turned pro in 1977 and, on February 15, 1978, in only his 8th pro bout, Spinks defeated Muhammad Ali (W 15) for the world heavyweight championship. The bout was deemed “Fight of the Year” and “Upset of the Year.” During his career, Spinks scored wins over Alfredo Evangelista, Bernardo Mercado, Jesse Burnett and drew with Eddie Lopez and Scott LeDoux.

“Leon and Michael Spinks hold a special place in boxing history as the only brothers to win both Olympic gold medals and the world heavyweight championship,” said Hall of Fame director Edward Brophy. “We are excited to welcome both to Canastota to be part of the 30th Anniversary celebration.”