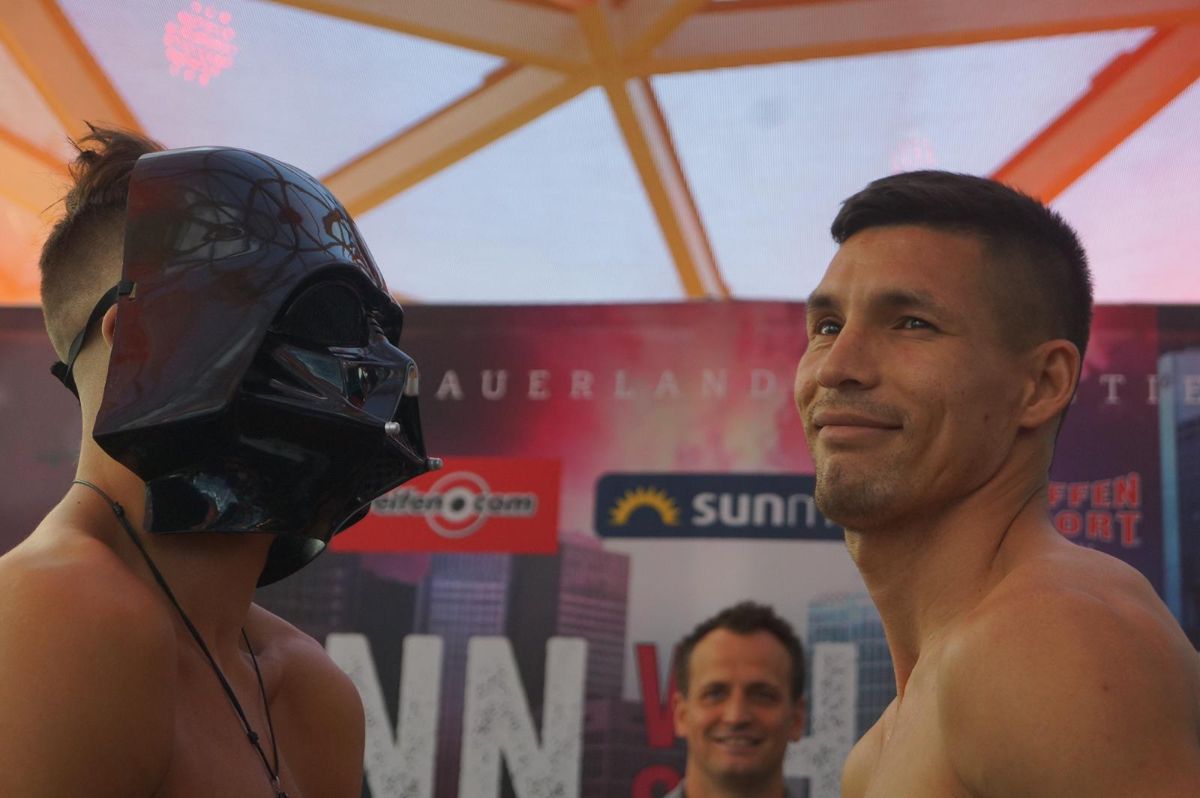 Anthony Yigit surprised fans by dressing as Darth Vader at the weigh-in today in Frankfurt ahead of his fight with Sandro Hernandez at the Fraport Arena.

The former World title challenger went undercover as the famous Star Wars villain, posing for pictures with unsuspecting spectators before taking to the scales and making weight for his eight-round super lightweight clash.

“Tomorrow is May 4th, Star Wars Day, so I wanted to do something fun to commemorate that,” explains Yigit. “I was in the crowd taking photos and challenging people to light sabre fights before my name was called. No one knew it was me so everyone was pretty shocked when I took off the mask.”

And after coming face-to-face with his opponent, ‘Darth Dig It’ had the following to say: “The force is strong with him, but not strong enough. He will feel the full power of the dark side when we meet in the ring tomorrow!”

Yigit fights on he undercard of the IBF International Light Heavyweight title clash between German rivals Leon Bunn and Leon Harth. All the action is available to watch live on Sport 1 in Germany and Viaplay in Sweden.

Anthony Yigit (22-1-1, 7 KOs) will have a familiar face in his corner when he takes on Sandro Hernandez (15-7-3, 10 KOs) on Saturday night at the Fraport Arena in Frankfurt, available to watch live on Viaplay in Sweden.

Yigit returns to action following a one-sided points win over Mohamed Khalladi in Koblenz, his first fight back since challenging Ivan Baranchyk for the IBF World Super Lightweight title in New Orleans in October 2018.

As the 27 year-old plots his route back into World title contention, he has enlisted the help of Erik Skoglund, one of Swedish boxing’s greatest exports, who was forced to cut short his own career after suffering a sparring injury.

“Erik has always been a great inspiration and motivator for me,” said Yigit. “Ever since we first got to know each in Berlin, when I turned pro and we trained together, I knew I’d found a great supporting arch in him, and him in me.

“He’s been in big fights and he knows how to stay cool so I’m hoping some of that experience will rub off on to me. It’s also nice to know I have someone in my corner who genuinely wants what’s best for me and is looking out for me.

“I believe he’s got a lot of experience that I can benefit from. We both approach fights in different ways. I can be quite hotheaded and too eager in the ring, while Erik always keeps a cool head, and that’s what I need in my corner.”

Skoglund, who spent two weeks in Gran Canaria in training camp with Yigit, will join head coach Carlos Formento and Joel Grandel in his countryman’s corner.

“Anthony asked me a few months ago if I’d like to be a part of his team and help him out in his corner,” said Skoglund. “He already has an amazing head coach, but I hope I can help get the best out of him on fight night.

“I hope I can bring him some confidence and help him pick the right tools. He is an amazing fighter, but sometimes he could choose an easier way to win, and hopefully I can help him with that.

“I really enjoyed spending time with him in camp. He’s a one of a kind fighter. Nobody I’ve ever seen works the way he does. I was already certain Anthony has the potential to be world champion one day, but now I’m even more sure.”

Yigit faces Hernandez in an eight-round super lightweight clash on the undercard of the IBF International Light Heavyweight title showdown between Leon Bunn and Leon Harth at the Fraport Arena in Frankfurt, Germany.

The 27 year-old, currently based in Gran Canaria, is back in Germany for another eight-round clash against Venezuela’s Sandro Hernandez, who in his last bout went the distance with Yigit’s former opponent Sandor Martin.

“I was satisfied with my performance against Khalladi because we got a good victory against a solid opponent. He knew he had a chance to make a name for himself if he beat me so he came to win and went out fighting with all he got,” says Yigit who wants to keep active as he awaits a return to the World stage.

“Hernandez fought and went the distance with Sandor Martin, who I defended my European title against in 2017, and who I would say is one of the top fighters in Europe, so I expect Hernandez to come and try to make a statement.

“It’s important for me to keep busy because I love fighting. I love the thrill of going in the ring and hearing the crowd cheer after a good fight. I like to entertain, and this is the only way I know how so the more I fight the better. Also it will keep me prepared for when a big fight comes, but I treat every fight the same. I’m always training hard and I’m always giving it 110%.”

Limited tickets for the Team Sauerland show at the Fraport Arena in Frankfurt are still available via www.eventim.de