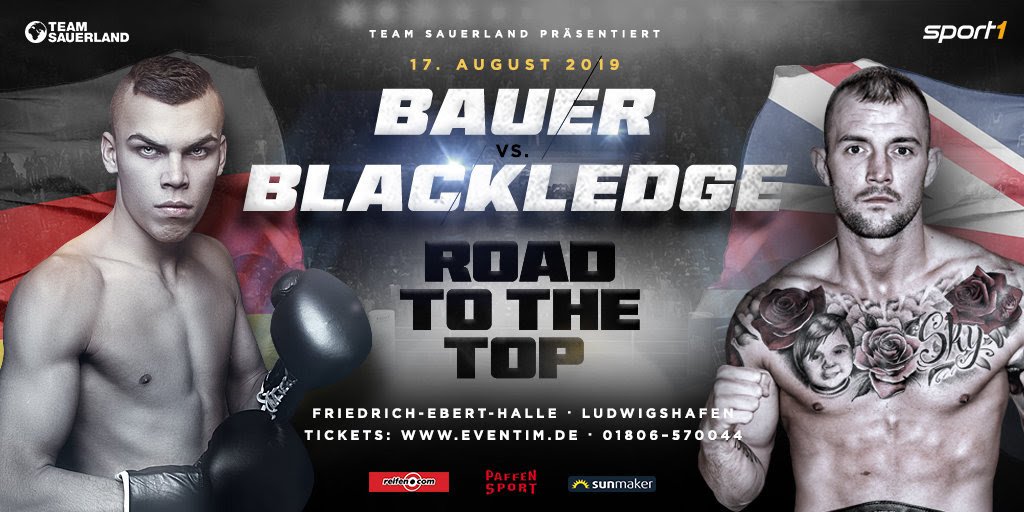 Leon Bauer (16-0-1, 9 KOs) will face his toughest career test on August 17 as the rising German star takes on experienced English boxer Luke Blackledge (26-7-2, 9 KOs) at the Friedrich-Ebert-Halle in Ludwigshafen, Germany.

The 20 year-old IBF Youth Champion returns to the ring following a one-sided points win over Argentina’s Mateo Damian Veron at the CongressPark in Wolfsburg in April, and will look to continue his climb up the super middleweight ranks with a victory in front of his home fans in Ludwigshafen.

“It’s an honour for me to box in front of my fans at home again,” said Bauer. “I always give it my all and I will do my best to win. I’m in good shape already, my training has started and the fight can’t come soon enough.

“Luke Blackledge is a strong opponent and has a lot of experience, but for me this fight is a good opportunity to show where I stand. The fans at the Friedrich-Ebert-Halle on August 17 will see how ready I am!”

Blackledge, a former Commonwealth and WBC International Silver Champion, who has faced the likes of former WBA Champion Rocky Fielding and current WBA Super and Ring Magazine Champion Callum Smith, believe his experience will give him the edge as he predicts a ‘battle’ against Bauer.

“We’re two aggressive boxers who come forward, and on August 17, it will come down to who shows more will. I expect a real battle,” says Blackledge. “I am extremely fit and have the experience of having boxed against the best in the world. I’m the strongest opponent Leon Bauer has ever faced. I cannot wait to show my talent in Germany and I’m sure that I’ll come home with the victory!”

“Luke Blackledge will be a real tough test for Leon,” said promoter Nisse Sauerland. “He has boxed some big names, won titles and is very experienced so the fans can look forward to another exciting battle in Ludwigshafen.”

All the action from the Friedrich-Ebert-Halle is available to watch live on Sport1 in Germany and Viasport+ and Viaplay in Norway. Tickets are available online via www.eventim.de or by calling +49 01806-570440.