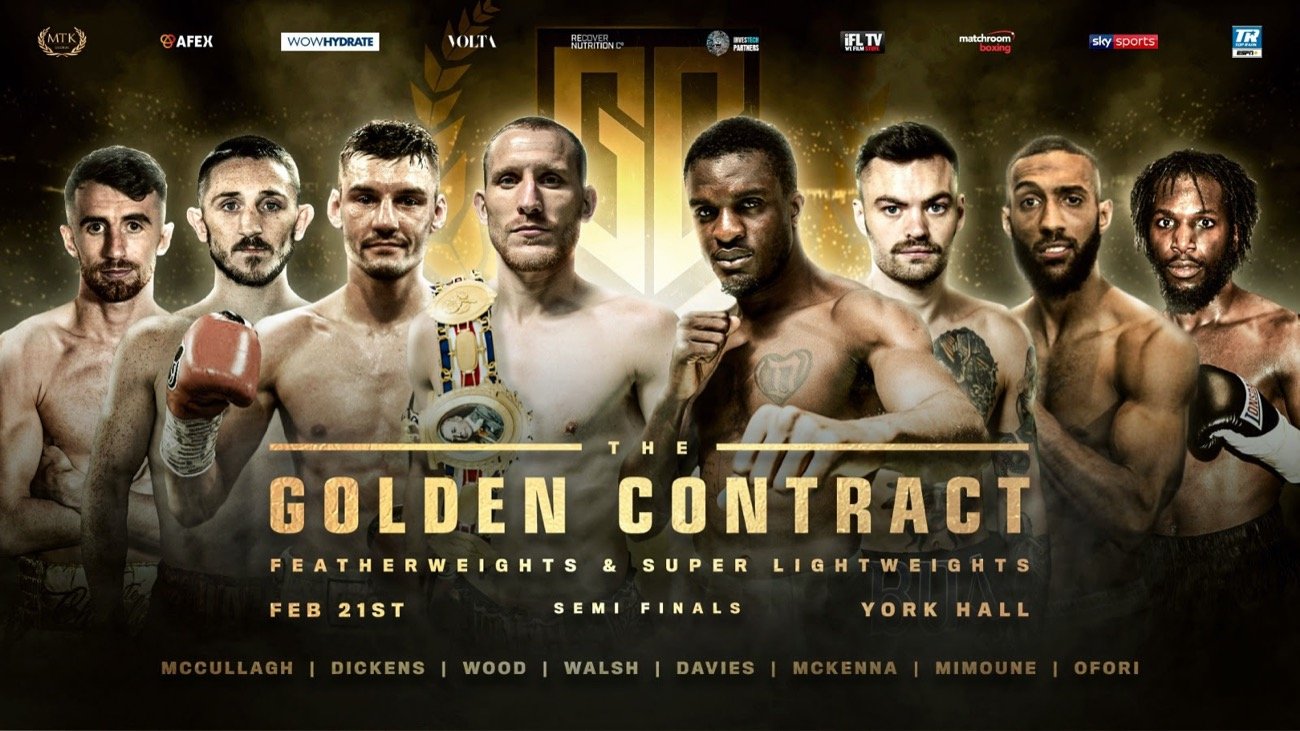 The final four in both the super-lightweight and the featherweight divisions will battle it out – Ohara Davies vs. Jeff Ofori and Tyrone McKenna vs. Mohamed Mimoune at 140lb, Tyrone McCullagh vs. Ryan Walsh and Leigh Wood vs. Jazza Dickens at 126lb.

A packed undercard sees some of the surrounding area’s hottest prospects in action, with Burim Ahmeti and William Hamilton making their professional bows while Elliot Whale and Inder Bassi Singh look to follow up promising debuts.

Davies drew out the golden ball at Tuesday’s draw and was swift to select the competition’s underdog Ofori as his opponent.

The Londoners had plenty to say to each other at a fractious weigh-in, where Hackney’s ‘Two Tanks’ clocked 9st 13lb 14oz at the second attempt to Tottenham fighter Ofori’s 9st 13lb 5oz.

With a huge right hand and new technical guidance from trainer Angel Fernandez, Davies is favourite to progress but Ofori has proven in his last two fights that he’s not a man to be underestimated.

WBC International champion McKenna is one of Belfast’s most popular fighters and was impressive in dispatching Southern Area champion Mikey Sakyi in the quarter-finals at the same venue.

With the profile of ‘The Mighty Celt’ soaring after his fight week antics (including THAT cane joust with McCullagh dressed as Dumb & Dumber at the press conference), the underdog appears to be revelling in the occasion.

In France’s Mimoune, he faces a former EBU and IBO world champion who is the bookies’ favourite for victory in the competition. This is two talented southpaws ready to put it all on the line for their place in the final.

Walsh plucked out the golden ball at Tuesday’s draw and chose to take on the conundrum that is McCullagh.

The reigning British champion, Walsh is considered the number one candidate in the competition and produced arguably the pick of the quarter-final performances by sweeping aside Hairon Socarras inside the distance.

McCullagh, who has joined close friend McKenna under new coach Peter Taylor, is renowned as one of the most awkward opponents out there. The Derry puzzler provides a truly intriguing style match-up for favourite Walsh.

Headlining the show on the night is the WBO European title collision between Nottingham’s Wood and Liverpool’s Dickens.

Animosity surged to the surface at Wednesday’s press conference with Dickens claiming he holds a psychological edge due to an amateur victory over ‘Lethal’ – claims playfully responded to by Wood.

Wood brought an element of comedy to the weigh-in by putting messages on his belts at the weigh-in and there’s no doubt both men feel they have a score to settle in what should be a thrilling finale to the evening.

Mimoune: No respect in wartime

Mohamed Mimoune has respect for his #GoldenContract rivals outside the ring but will gleefully flick that switch off for the semi-finals.

France’s top super-lightweight (22-3, 3 KOs) climbed off the canvas to stop the dangerous Darren Surtees in the last eight and now heads back to York Hall on February 21 alongside Ohara Davies, Tyrone Mckenna and Jeff Ofori to battle it out for a place in the final.

Mimoune said: “I was surprised during a lapse of concentration when I was knocked down but I have worked on it with my team and it won’t happen again.

“The three other fighters left in the #GoldenContract are all good opponents who I respect but in the ring it will be a war without respect.

“I am very excited to return to London and fight for all my English fans with the magnificent ambience they create at York Hall.

“I’ll also have people travelling over from France who will be present in London as they are in the rest of the world. They follow me everywhere. It gives me even more strength and yes, it will get noisy.

“I have the ability to adapt to fight all types of fighters so I will be able to vanquish all three potential opponents. I don’t have a particular choice – it’s my coaches who will select my opponents.”

Leigh Wood: I’ll be even better in semi-final

A lot of people felt Leigh Wood’s #GoldenContract quarter-final was the performance of the round, but the Nottingham fighter has sent a warning to his rivals – insisting you’ve seen nothing yet.

Wood (23-1 (13 KOs) was extremely impressive in the quarter-final, but has now revealed he was carrying an injury heading into that fight, and so will be even more lethal in this month’s semi-final.

Wood said: “I’m really excited for the semi-finals and I’m on fire. In the quarter-finals I didn’t have the preparation I wanted because of an injury, but I was determined to do what I had to do to win that fight.

“I couldn’t run a single mile for that quarter-final, so reverted to swimming and doing things I wasn’t used to doing. I couldn’t gauge my fitness so that was an obstacle I had to overcome, so I was proud of getting the win under those circumstances.

“I’m not underestimating anybody in the quarter-final, but the biggest thing for me is doing what I do best. Preparing for somebody like myself is a nightmare. How do you prepare for someone that can box, switch hit, is fit and can punch?

“Before signing with Dave Coldwell I spent a lot of time in the gym either injured or fully able to fight and nothing would come my way, so now I’m loving having all these fights lined up.”

A massive card at York Hall later this month also includes up and coming stars Elliot Whale and Inder Bassi Singh, along with debutants Burim Ahmeti and William Hamilton.

The semi-finals of the #GoldenContract for both featherweights and super-lightweights will take place on the same night.

The hugely successful tournament will return to London’s iconic York Hall on February 21 to stage the final fours of the two divisions – live on Sky Sports in the UK in association with Matchroom Boxing and on ESPN+ in the US in association with ESPN+.

With the featherweights including Ryan Walsh, Leigh Wood, Tyrone McCullagh and Jazza Dickens and the super-lightweight hopefuls whittled down to Ohara Davies, Tyrone McKenna, Mohamed Mimoune and Jeff Ofori, expectations are high.

MTK Global Professional Development Coordinator Jamie Conlan said: “What a night in prospect this is. This competition has already been a great success and now it goes up another level. Even the knockout bonus money goes up!

“It’s great to be having these semis at York Hall, which were packed for the quarters and provided superb atmospheres. This will be even bigger, better and louder.

“We’ve chosen to do both feather and super-light on the same night to bring together eight sets of fans hoping to roar their heroes to a life-changing opportunity in the two finals.

“Fans from up and down the U.K, Ireland and France will be in attendance supporting the semi-finalists and with ESPN screening it all to the US alongside Sky Sports in the UK, this is simply a massive night for boxing.”

Tickets for the event will be released on Friday. Confirmation of the fight week draw, press conference and weigh-in will be forthcoming in due course.