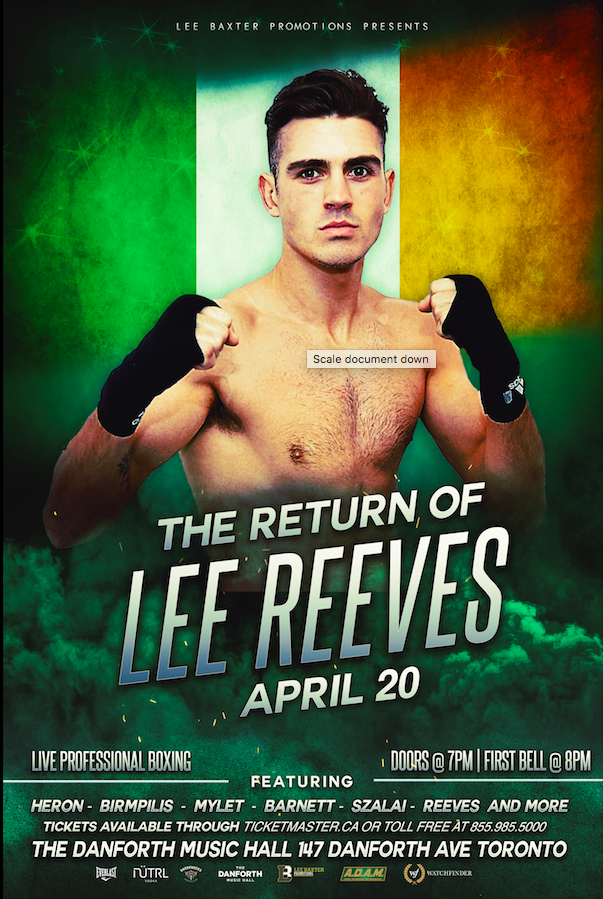 It’s been a fairytale first five months for Lee Reeves in his professional boxing career. On April 20, it’s only going to get better.

On the heels of a spectacular performance at Madison Square Garden in New York City on St. Patrick’s Day, the welterweight prospect Reeves has earned a headlining slot on the annual Lee Baxter Promotions 4/20 event at the Danforth Music Hall in Toronto.

“It’s amazing. This is how I imagined my career would go. Big nights and putting on shows for the world to see, and representing my city in a positive light,” said Reeves (3-0, 2 KOs).

Reeves helped ignite the raucous crowd in NYC on March 17 when he dominated Edward Torres en route to a four-round unanimous decision. He helped set the table for his countrymen Paddy Barnes and Michael Conlan, as well as his stablemate Samuel Vargas, who perhaps stole the show against Luis Collazo.

“It was an unbelievable experience, and to be there on St. Patrick’s Day and having the Irish there behind me screaming was a beautiful thing,” said Reeves. “It was like being at home fighting, hearing the chants and the screaming of my name. And as it got closer to the main event, the place was erupting with atmosphere and Irish spirit.”

The 24-year old proved that he’s not second in line to any Irish star—he’s at the front of the pack, a main eventer himself. Just ask lineal heavyweight champion Tyson Fury, who after seeing Reeves’ debut last year declared “he’s fast, talented and super sexy. Actually He reminds me of someone—me. Looks like Ireland has a new boxing star.”

Reeves is one of the best Irish amateurs of his era, winning eight Limerick championships and eight Munster championships, along with a pair of Irish national titles. During his years as a competitive boxer, campaigning mostly as a light welterweight, he never failed to appear in the national final at year’s end.

Reeves has already fought twice in Toronto, the home base of Lee Baxter Promotions, where a strong Irish community exists and continues to grow. It’s estimated that over 2.1 million Irish Canadians live in the province of Ontario.

“He’s a natural showman,” said Lee Baxter. “The first two times he fought here, the first two fights of his career, his knockouts were what everyone was talking about at the end of the night. He has future champion written all over him, so we figured, why wait? He’s ready to be a headliner.”

The annual 4/20 event, titled “Light ‘Em Up,” is in its third year, and has sold out well before the event date each time. This year is no different, with tickets nearly sold out, thanks in large part to Reeves and the Irish community.

“It’s gonna feel like Madison Square Garden on St. Patrick’s Day in the Danforth Music Hall, I promise you,” said Baxter. “It’s an intimate venue, and it gets loud in there, and we know Lee’s fans bring the noise.”

Tickets are available at Ticketmaster, and start at just $45.