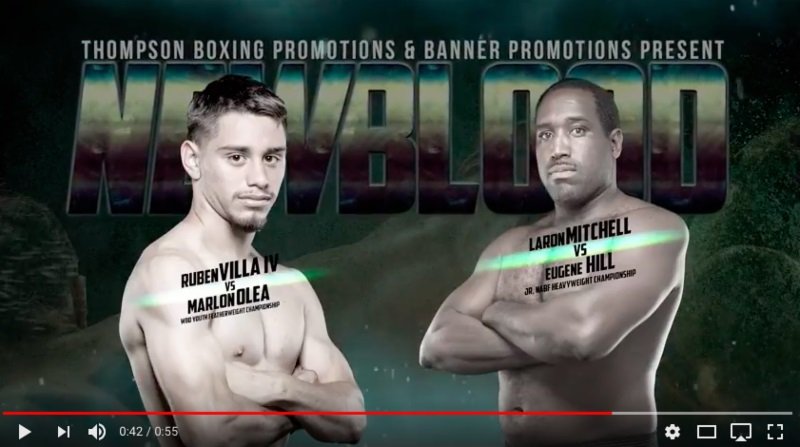 The “New Blood” co-feature is scheduled for 8-rounds.

Mitchell, a southpaw from San Francisco, last appeared in August when he knocked out Mike Bissett in the third round, and with the win, recorded his first successful title defense.

The full-time physical education teacher, who began his career with thirteen straight knockout wins, is in prime shape to defend his title for a second time.

“Training camp is real hard, real intense just like always,” remarked Mitchell, who is 37-years-old, and at 6’4″ boasts excellent size for the division. “I’m excited to be back in it.”

Hill, 40, is still a force despite his veteran status. He hasn’t lost since 2009 and has won eighteen straight heading into his title fight against Mitchell.

“He’s dangerous, he’s a big puncher,” said Mitchell, who signed with Thompson Boxing five years ago. “I have to be ready because he comes forward with heavy punches. The plan is to meet him in the center of the ring and we’ll go from there. I’m bringing it.”

Since turning professional in 2013, Mitchell has passed every test placed in front of him. He outpointed the fast-handed Scott Alexander to win his current championship and credits a consistent mentality for his recent success.

“It’s an important title fight, but I can’t place too much emphasis on it because I train with the same focus and determination every time out,” Mitchell said. “But still, it would be sweet to get another win and defend my title in the process.”

In the main event, Salinas native Ruben Villa (10-0, 4 KOs) headlines his first event when he battles fellow prospect Marlon Olea (13-2, 12 KOs) of Colombia in a bout set for 8-rounds. The pair will vie for the vacant WBO Youth Featherweight Title.

Tyson Vs. Jones Rules: No Winner, No Knockout – No Point?165 Total Shares

Tyson Vs. Jones Rules: No Winner, No Knockout – No Point?165 Total Shares