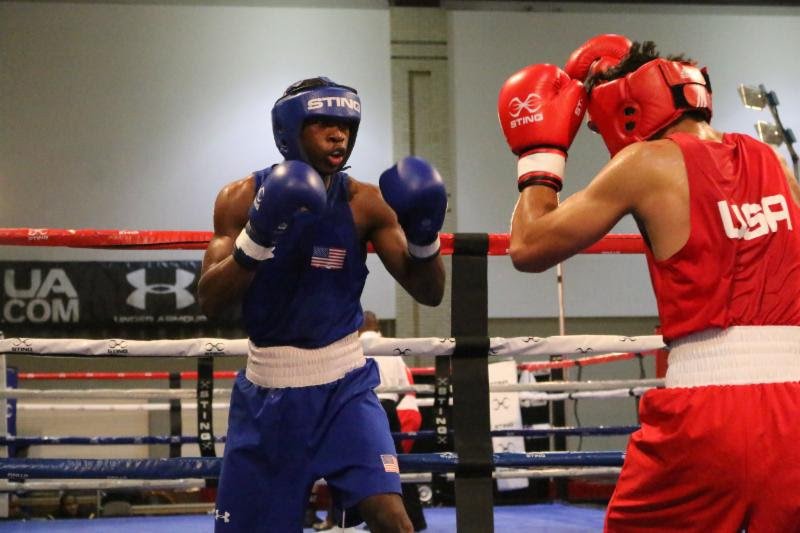 Team USA lightweight Keyshawn Davis has been preparing all of his young life to represent his country in the Olympics. If everything goes as planned and remains on schedule, the Norfolk, Virginia native will be boxing for gold next year in Japan.

Internationally, he’s done some serious damage, too. The highlight of his amateur career, to date, is winning gold at last year’s Strandja Tournament in Bulgaria. Davis recently captured silver at the 2019 Pan-American Games Qualifier in Nicaragua, in addition to the 2018 Chemistry Cup in Germany.

“I won my first International gold medal in Bulgaria,” Davis agreed with it being the highlight of his amateur career. “I was also selected as the Most Outstanding Boxer.”

“Qualifying for the Olympic Trials really wasn’t much of an accomplishment for me because it was expected,” Davis noted. “For me it was to get on Team USA, again and this is my second year on the team.

“There’s no real competition for me to qualify for the USA Olympic Boxing Team. My last fight in The Nationals was a little bit of a challenge (vs. Dalis Kaleiopu), because I slipped and got up.”

“There’s a very good chance we’ll fight again at the Pan-Am Games, most likely in Japan, as well,” Davis added. “We have to win two rounds to qualify for the finals and for me to get my revenge. Cruz has a lot more International experience than I do. He’s 26 years old and World Champion in our weight class.”

Davis started boxing when he was nine when, tired of Keyshawn and his two brothers fighting each other and in school, his mother asked if they wanted to go to the gym to learn how to box. They did and today, his older (Kelvin) and younger (Keon) brothers are also amateur boxers.

Not long after that he met Troy Isley, who is a fellow member of Team USA, and today they’re as close as brothers.

“I met Troy way back, after I first started boxing,” Davis remembered. “We’d meet up at the Nationals and other tournaments and hang together with my brothers. My coach retired, so I went to Troy’s gym (Alexandria, VA) and started working with Coach Kay (Koroma, USA Assistant National Boxing Coach). We’re getting close to our dream (representing the USA in the Olympics) that started so long ago that it seems unreal to be getting close. You can expect two boxers from Virginia to come back from Japan with gold medals. We’re like brothers.”

“Coach Kay first cornered me when I was 13. He’s a great coach who wants us to succeed in life, not just in the ring. He wants the best for us. We have one of the best U.S. boxing teams in a long time and it’s going to show in Japan. We always help each other out and this is a very exciting time for us right now.”

Another close friend of Keyshawn’s is, 2018 Olympic silver medalist Shakur Stevenson, who has been through what Keyshawn is approaching, and is now at the level as a professional prospect in which Davis aspires to reach.

“Shakur has always supported me,” Davis continued. “We talk a lot. Honestly, it’s hard for me not to think about turning pro, because my amateur career will be over after the Olympics. I’ve always been taught to have a plan, so I’ve been preparing, business-wise, looking into my options (manager and promoter), and to stay on the right track from the amateurs to pros.”

If he wasn’t a boxer, Davis figures he’d be a realtor, but he’s thoroughly enjoying the life as a boxer.

“This has been a great experience,” Davis spoke about his amateur boxing career, “especially this year getting ready for the Pan AMs. I’ve had opportunities to travel and meet people, but the best part is being part of a team like this. Boxing is an individual sport but, outside the ring, we’re always pushing hard for each other.

“I thank God every day when I get up for putting me in this position. All I want to do is provide for me and my family. At my age, I’m ahead of the game.”