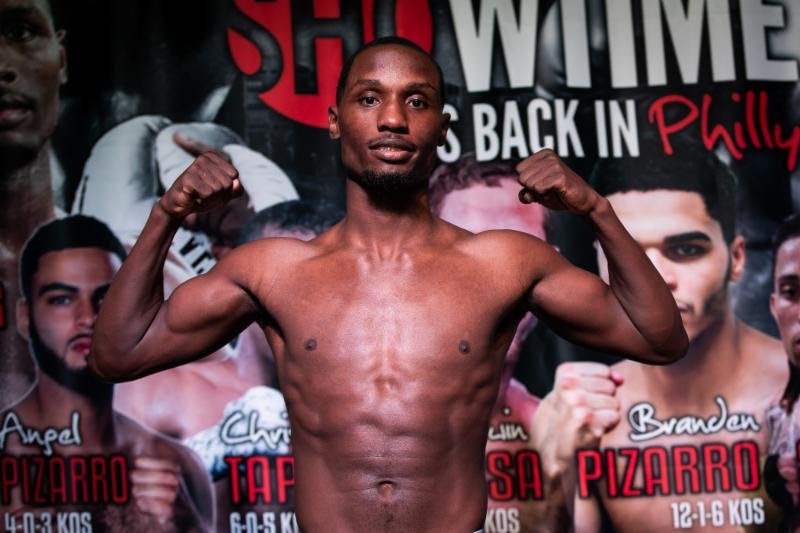 Tonight at The 2300 Arena in Philadelphia, Kenneth Sims, Jr. battles Samuel Teah in the co-featured bout of a ShoBox: The New Generation card live on Showtime® beginning at 9:35 ET / PT.

Sims of Chicago has a record of 13-1-1 with four knockouts, and will be making his 4th appearance on ShoBox. The 24 year-old is getting right back in the ring after winning a six-round unanimous decision over Andrew Rodgers on October 13th.

“Camp was great. I fought on October 13th and I never stopped training,” said Sims.

Sims feels he will start to come into his power as he has been focusing on strength and conditioning over his last three fights.

“I got a full training camp with my strength and conditioning coach Ed Jack. He also works with Andre Ward, Bryant Jennings and the Charlo brothers.”

Sims will be back on ShoBox for the second time this year. On July 20th, Sims fought to an entertaining draw against undefeated Montana Love in a fight that Sims and his team believes that the fight should have been scored in his favor.

“I will be even better then my last fight on ShoBox. Samuel Teah is a good fighter, but I really do not have much to say about him. I am happy to be back on ShoBox. I am improved from my last performance, and I will show the world that I am better.”

“Kenny has been active over the past four months. This will be his third bout, and he is just 24 years-old. Some people still don’t realize that because he was a touted amateur, and he has appeared on this platform so many times. I think we will see a stronger Kenneth Sims on Friday, and he will start to realize the promise that many including myself had for him as he was coming up in the pro ranks.”

Sims weighed in at 139 pounds at Thursday’s weigh in.

Micki Nielsen (25-1, 15 KOs) will challenge Yves Ngabu (19-0, 14 KOs) for the European Cruiserweight title on February 16 at the Eventhal Schiervelde in Roeselare, Belgium.

Nielsen has landed a golden opportunity to claim Euro glory having been named mandatory challenger for Ngabu’s belt, but can expect a tough task, travelling away from home to meet the undefeated champion in his backyard.

Ngabu claimed the European title with a fourth-round stoppage win over Tomas Ladi in April 2017, and recorded his first defence in similarly empathic fashion, forcing Geoffrey Battelo to retire in the third-round in January this year.

“I’m very happy to get the chance to fight for the European title,” said Nielsen. “This is a big opportunity for me and I will do everything possible to bring the belt home to Denmark.

“I know Ngabu is a tough fighter and a strong champion but I believe I can beat him. I’m not worried about going to Belgium and fighting in front of his supporters. A ring is a ring, and when the bell goes, it will be just me and him.

“I’ve never backed down from a challenge and I’ve never turned down a fight. Ngabu should be ready for war because that’s what I’m bringing!”

Promoter Nisse Sauerland is backing his fighter to get the job done in Belgium.

“Throughout his career, we’ve only seen glimpses of Micki’s true potential,” he says. “But on February 16, it’s his time to shine. Yves Ngabu is a good fighter but he’s never met anyone with Micki’s strength and ability before.”