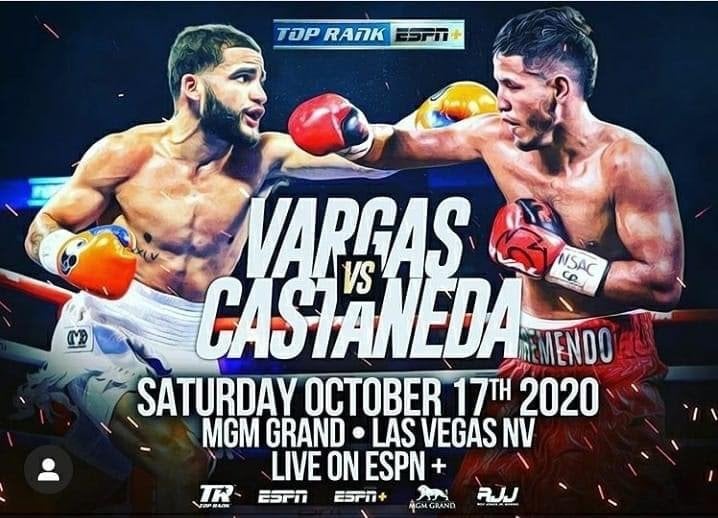 If Kendo “Tremendo” Castaneda lives up to his nickname this Saturday night (Oct. 17) in Las Vegas, the San Antonio fighter will derail the fast track Josue “The Prodigy” Vargas has been placed.

Vargas vs. Castaneda will be streamed live on ESPN+, starting at 7:30 p.m. ET/4:30 p.m. PT start, in a 10-round, junior welterweight showdown taking place on the high-profile Vasiliy Lomachenko-Teofimo Lopez title unification card in “The Bubble” at MGM Grand Las Vegas Conference Center.

“I’m stoked to be on one of the biggest cards of the year,” Castaneda said. “Lomachenko is one of my all-time favorites, and it’s an honor fighting on his card.”

“We’d like to thank Bob Arum, Top Rank, MGM Grand and ESPN for giving us this tremendous opportunity,” commented Castaneda’s promoter, Keith Veltre, CEO/co-founder of Roy Jones. Jr. Boxing Promotions. “Arum said Vargas could graduate to contender with a win over Castaneda, but Kendo is more than capable of upsetting a hot prospect like Vargas, and a victory will get him back on the right track. Remember, he was rated in the top 15 before his last two fights, and Vargas hasn’t fought anybody on the same level as Kendo.”

Vargas (17-1, 9 KOs), a Puerto Rico native living in Brooklyn (NY), has been super hyped since he was an amateur, thus, his nickname, “The Prodigy.” The 22-year-old southpaw is riding an 11-fight win streak. His only loss was in 2016 to Samuel Santana, when Vargas was disqualified in the third round, following the advice of the ring physician, after Vargas hit Santana when the latter’s back was turned.

“I’ve heard nothing but great things about my opponent,” Castaneda added, “so I’m expecting a great challenge. It’s going to be a tremendous showdown, Puerto Rico versus Mexico.

“I have been training tremendously hard during this pandemic, keeping to myself and working heard with Regis Prograis at his camp in Houston.”