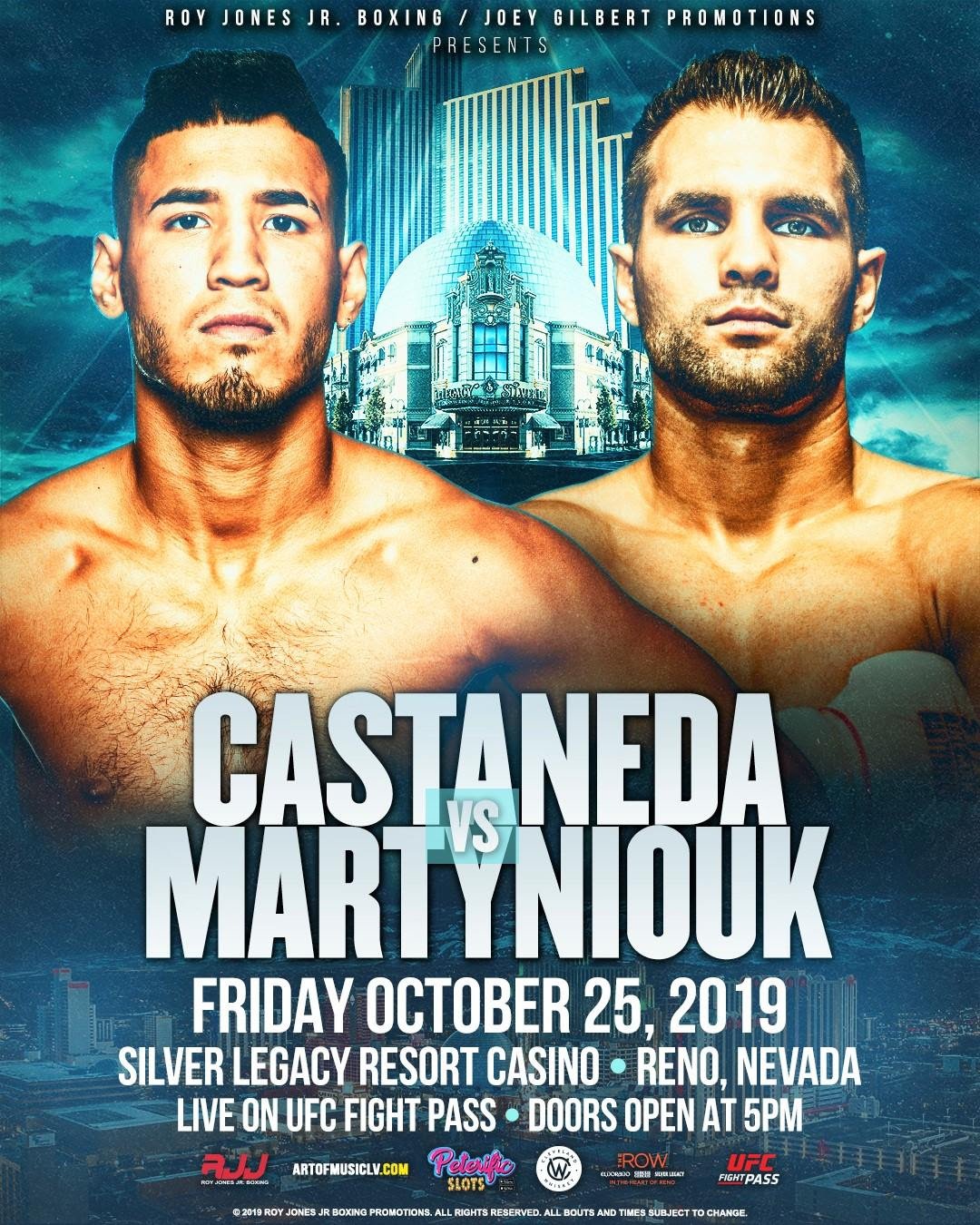 The next wave of Reno boxers will continue its rich boxing tradition October 25 on “RJJ Boxing on UFC FIGHT PASS®,” co-promoted by Joey Gilbert Promotions in association with Silver Legacy Resort Casino at THE ROW in Reno, Nevada.

The event will be streamed live and exclusively on UFC FIGHT PASS, the world’s leading digital subscription service for combat sports, starting at 10 p.m. ET / 7 p.m. PT, from inside the Grande Exposition Hall at Silver Legacy.

Local boxers such as featherweight Ricardo Lucio Galvan (2-0, 2 KOs) and super lightweight Wilfred Mariano (1-0, 1 KO) are all slated to fight on the Oct. 25th card against opponents to be determined.

Organized boxing was held during the early 1880’s in small mining towns in the Northwest section of Nevada, professional boxing matches were conducted there later that century.

Hall of Fame promoter Tex Richard and legendary heavyweight Jack Johnson first put Reno on the boxing map on July 4, 1910, when World heavyweight champion successfully defending his title against James J. Jeffries, stopping him in the 15th round at what was reportedly the only venue ever built for a single boxing event. When President William Taft declined Richard’s offer to referee, Richards became the third man in the ring. Boxing stars including Jake Kilrain, Tommy Burns, and Abe Attell were introduced to the reported crowd of 16,528.

Richard first brought another Hall of Fame heavyweight champion, Jack Dempsey, to Reno in 1915 for his ninth pro fight, when Dempsey stopped Emmanuel Campbell in the fourth round at Airdrome Arena. To fight, Dempsey had to “ride the rails” from Utah to Reno, stored away on a train with hobos. Dempsey returned three years later to knockout Jack Moran in the opening round at Moana Spring Arena.

Dempsey may have been involved in unsanctioned fights in Reno as well. Desperate for money during the early part of his boxing career, Dempsey is infamous for walking into saloons and saying, “I can’t sing, and I can’t dance, but I can lick any SOB in the house.”

Gilbert commented, “Having fought as both an amateur and a professional at these same properties; THE ROW, Eldorado, Silver Legacy, and Circus Circus, which are like a second home to me and all Nevada boxing alumni, it’s really an honor to bring boxing and combat sports back to Northern Nevada, a true fight town, and to provide world class entertainment and an incredible digital production through Roy Jones JR Boxing and UFC FIGHT PASSs, in a partnership with the very casinos and environment that helped make me who I am today; I couldn’t be more delighted to be a part of this opportunity with Eldorado Resorts and UFC Fight Pass through Roy Jones Jr Promotions. I’m looking forward to a prosperous partnership with everyone involved, including the local community and all fight fans in the area.”

Hall of Fame referee Mills Lane was an adopted son of Reno, arguably the No. 1 referee in the world of boxing, during his high-profile stretch of activity.

Undefeated super lightweight prospect Kendo “Tremendo” Castaneda plans to do some early trick or treatin’ October 25th, when he headlines another installment of “RJJ Boxing on UFC FIGHT PASS®,” co-promoted by Joey Gilbert Promotions in association with Silver Legacy Resort Casino at THE ROW in Reno, Nevada.

The Oct. 25th show in Reno will be streamed live and exclusively on UFC FIGHT PASS, the world’s leading digital subscription service for combat sports, starting at 10 p.m. ET / 7 p.m. PT, from inside the Grande Exposition Hall at Silver Legacy.

“An impressive win on UFC FIGHT PASS means everything for me and my career,” said the personable Castaneda, who will be fighting outside of his native Texas for only the third time as a professional. “Getting back in the ring is just another date for me. Come October 25th, the people are in for a ‘Tremendous’ thrill, because I will portray Michael Myers on a classic Halloween Night of Boxing.”

Castaneda had approximately 120 amateur fights, highlighted by his gold-medal winning performance at the 2018 Ringside World Championships. He was also a two-time San Antonio and Texas State Golden Gloves champion (201102012), losing both times at the Golden Gloves National Championships to the eventual champion.

At 18, Castaneda decided that he’d had enough of amateur boxer and he turned pro, largely because he his style is much better suited for the pro ranks.

Castaneda will face the stiffest test of his young career, Estonia-native Stan Martyniouk (20-2, 6 KOs), who fights out of Belmont, California, the main event.

Galvan is matched against Sacramento’s pro-debuting Samir McQueen, while Mariano faces an opponent to be determined.