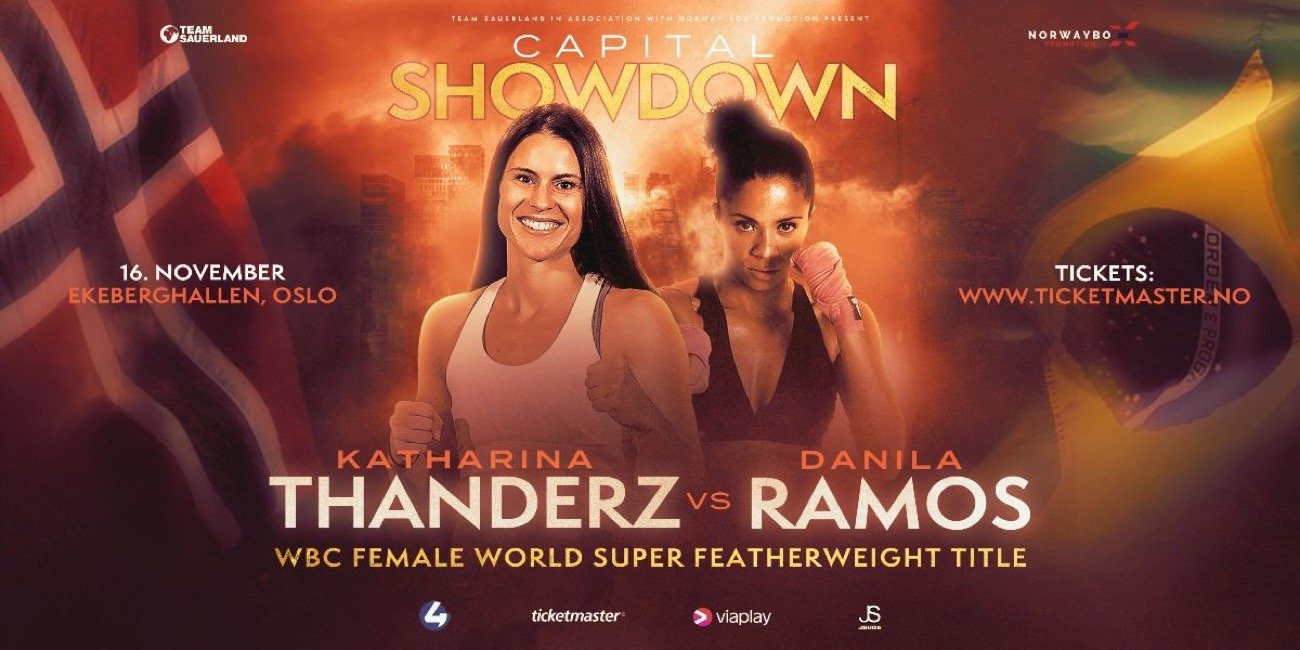 Katharina Thanderz (12-0, 2 KOs) has landed a dream World title fight on November 16 as she tops an action-packed event at the Ekeberghallen in Oslo.

Having signed promotional terms with Team Sauerland, Thanderz aims to follow in the footsteps of compatriot Cecilia Brækhus, the current Unified 147lbs champion, who is considered one of the greatest female boxers of all time.

Unbeaten in twelve professional contests, the former European and WBC International Champion will get her first taste of World title action against Danila Ramos (8-1, 1 KO) for the interim WBC World Super Featherweight crown.

Thanderz’s World title tilt comes at the iconic Oslo venue that alongside world-renowned recording artists such as David Bowie and ABBA, has played host to two World title fights prior to Norway’s 33-year ban on professional boxing.

“Fighting for my first World title is a dream come true. This is exactly what I’ve visualised in every training session since I started boxing,” says Thanderz. “To get this opportunity in Oslo, in the city I was born, in front of all my family and friends is a huge motivation for me, and I will do everything I can to win.

“Ramos is a legitimate opponent who isn’t afraid of getting into a fight. She has an aggressive, come forward style so I expect a hard battle. She has already fought for the belt, where she lost a close decision, so I know she will be eager to win the title this time. She’s Brazilian, but she lives and trains in Argentina, which is a country with a very high level of female fighters.

“I’m hungry, motivated and excited. I’m ready to put in the hard work that is needed for a fight at this level. People will see what I’m made of. They will see a fighter without fear and willing to do whatever it takes to give Norway a new World Champion. It will be a fight filled with a lot of war and action!”

Ramos, the Buenos Aires-based Brazilian, is equally confident of claiming World honours having found herself on the wrong end of a points decision against Elhem Mekhaled for the same WBC strap earlier this year.

The 34-year-old, known as ‘A Guerreira’ (The Warrior), is back to winning ways following a unanimous verdict against Lilian Dolores Silva, and has outlined her plan to upset the home fighter and bring the belt back to Argentina.

“I am very confident I can win this fight,” says Ramos. “Katharina is a good, offensive fighter. I really like her style, but I think it’s ideal for me. I will be preparing for the fight in Buenos Aires, which has a very high level for professional boxing, and will be sparring with World Champions. I am happy to get the chance to fight for the WBC title again, and this time it won’t escape me. I will give everything to make sure the belt comes back to Argentina with me.”

Promoter Nisse Sauerland says he is delighted to secure Thanderz a World title shot and is excited to bring championship boxing back to the Ekeberghallen.

“This is a great opportunity for Katharina to claim her first World title,” says Sauerland. “We were determined to deliver Katharina a World title fight and we’re delighted she’ll get her chance against Danila Ramos for the WBC belt.

“The Ekeberghallen has a great history for boxing in Norway and we look forward to continuing that tradition on November 16. Alongside Katharina’s World title challenge, we will be working with Norway Box Promotion to deliver a full undercard showcasing the very best of Norwegian boxing.”

“We really appreciate the confidence Team Sauerland has shown in us. It’s a great honour to be able to kick start our new promotion company with an event of this magnitude. I really hope the people of Oslo will turn up and support our great group of fighters on November 16. It will be an exhilarating action packed event you can’t miss,” says Atle Walgren, for Norway Box Promotion.

All the action from the Ekeberghallen including Thanderz’s World title fight will be shown live on Viasat 4 in Norway. Christian Ramberg, Programme Manager Sports for NENT Group, says: “Katharina is a fascinating person and a fantastic fighter. I remember seeing her in action for the first time and thinking she is something special. I am proud to bring her home to Oslo for a world title fight in an historic venue. I cannot wait for the fight to start.”

Katharina Thanderz (12-0, 2 KOs) will have star support from some of Norway’s top boxing talents when she meets Danila Ramos (8-1, 1 KO) for the WBC World Super Featherweight title on November 16th at the Ekeberghallen.

“I’m really looking forward to a huge event in Oslo in November,” said Melhus. “I can’t wait to get back in the ring and put on a show. I think my opponent will come and try to knock me out, but he will have a very hard day at work.”

Alexander Hagen (13-2-1, 6 KOs) can secure his fourteenth professional victory when he meets the battle hardened Emmanuel Feuzeu (10-10-2, 4 KOs) at the Oslo venue that has previously played host to two World title challenges.

“I am looking forward to fighting in Oslo for the third time in my career,” says the 30-year-old light heavyweight. “It is an honour to fight at the Ekeberghallen where both Harald Skog and Svein Erik Paulsen fought for World titles.

“Emmanuel Feuzeu is an opponent who comes to fight. I have to be fully focused on fight night, and I expect it to be a tough fight.”

“Fighting in Norway, in front of my fans with Viasat broadcasting the event is something I’m really looking forward to,” he says. “Oslo is not so far from where I live, so I hope a lot of people from my hometown are coming to support me.

“I know my opponent is a tough guy, who has been up against some good boxers, but for me, it doesn’t matter, I am ready for anyone. I just hope he comes to fight so we can put on a good show for the audience.”

With more fights set to be announced, promoter Nisse Sauerland is promising a huge event in the Norwegian capital at the historic Ekeberghallen venue.

“Fight fans can look forward to a spectacular night of action on November 16th,” said Sauerland. “A World title fight for Katharina Thanderz, plus a full undercard featuring the best of Norwegian boxing. We’re very happy to be working with Norway Box Promotion to give up and coming talent the chance to shine, and we still have some exciting announcements to come.”

Atle Walgren for Norway Box Promotion: “We have for a long time wanted to be more involved with professional boxing in Norway. We want to help young talented boxers on the rise and create great sporting experiences for everyone watching. We’re immensely thrilled about November 16th. To pull off such a great fight card couldn’t have been done without the cooperation we have with Sauerland. The best boxers fighting together under one roof. This is great news for boxing fans in Norway. The future of professional boxing looks bright.”