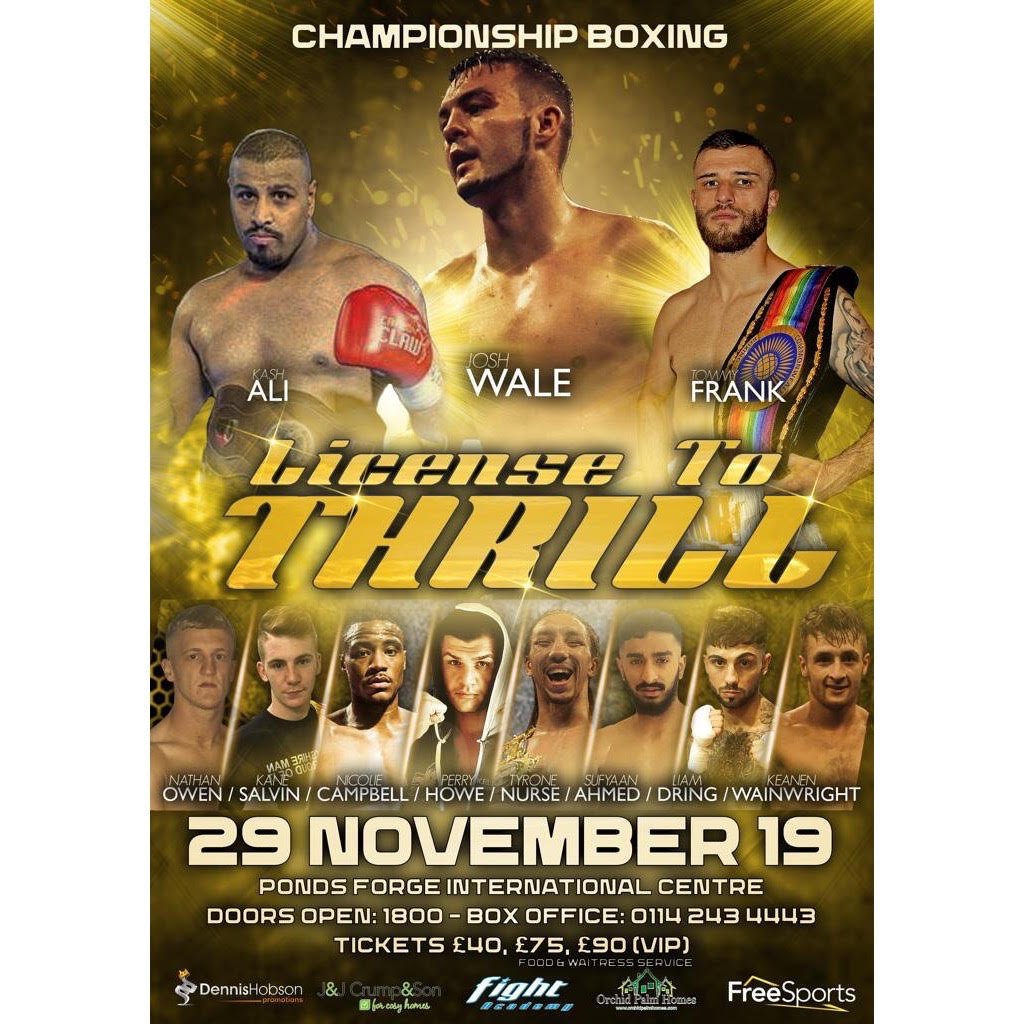 Dennis Hobson Promotions’ next show will be at Sheffield’s Ponds Forge Arena on November 29, and will be co-headlined by local man Tommy Frank, and Barnsley’s Josh Wale. Also appearing on the card will be heavyweight Kash Ali. The action will be televised live on Freesports (Freeview 64; Sky 422; Virgin 553; Freesat 252; TalkTalk 64; BT 64).

Frank, 12-0 (3), is already a double-title holder, and will be aiming to add another win to his record to push himself up the rankings. The 26-year-old claimed the Commonwealth Super Flyweight belt in March with a stoppage win over Belfast’s Luke Wilton, and followed that up with a hard-fought 12-round win over Thailand’s Aran Dipaen in September to add the WBC International Silver Title to his collection.

Wale – the former British Bantamweight champion, and European Title challenger – is now campaigning at featherweight. The 42-bout veteran, 29-11-2 (14), has already picked up two wins at the 9st limit, and 31-year-old Josh is confident he can top off an already successful career with another major belt around his waist.

Ali’s only career defeat, in 16 pro outings, was a controversial one. The 27-year-old faced Liverpool’s David Price in March but, despite appearing to be turning the fight in his favour, inexplicably bit the Liverpudlian and was disqualified in round five. Having since served a ban from the sport, Kash has now teamed up with promoter Dennis Hobson and trainer Richard Towers.

On the night, Frank will move down in weight to face Mexican Martin Tecuapetla for the vacant International Boxing Organisation (IBO) Inter-Continental Flyweight Title; while Wale takes on Ghana’s Felix Williams for the IBO International Featherweight crown.

Tecuapetla, 29, is far more experienced than Tommy, with a ledger of 15-11-4 (10). The Mexico City native has knocked out 10 opponents, only been stopped twice in his 11 career defeats, and fought for the IBF World Light Flyweight belt in 2016, losing a split decision verdict in Japan.

Williams will be having his first fight outside the UK, but will face Wale full of confidence. From the fighting city of Accra, Felix has lost just once in 28 fights, and has KO’d 20 of the men he’s faced in the opposite corner.

“Josh and Tommy will co-headline. We’ve got Kash making his debut for us and we think he’s going to set the heavyweight scene alight, so I’m really excited about this show,” explained promoter Hobson. “We’re positioning both Josh and Tommy into world title shots with the IBO, so both will be fighting for IBO titles on this card. It’s going to be a cracking show, live on Freesports, and it just shows we’re still up there competing with the other promotional outfits.

“The opportunity for Josh and Tommy to fight for these IBO belts came up, and it leaves us with our options open in the future. Tommy still has his Commonwealth Title and has just won a WBC belt, and depending on the rating he gets with the WBC, there will be some big fights for Tommy in 2020. So, this IBO route just gives us another option.

“They are two good opponents for Tommy and Josh, so it will be decent tests for both. There are no walkovers on our shows. When you get to the level of Tommy and Josh it’s difficult to hold them back. So, we have to keep going with the momentum. Tommy’s last fight was a great test for him, the kind of fight that showed he can operate at a higher level and he can tough it out against a hard opponent.

“I’m excited about seeing how far we can go with Kash, too. Richard has done a great job with him, and I think he could be the first British-Asian to win the British heavyweight crown. We might make a bit of history with him; we’re going to make a splash with Kash!”