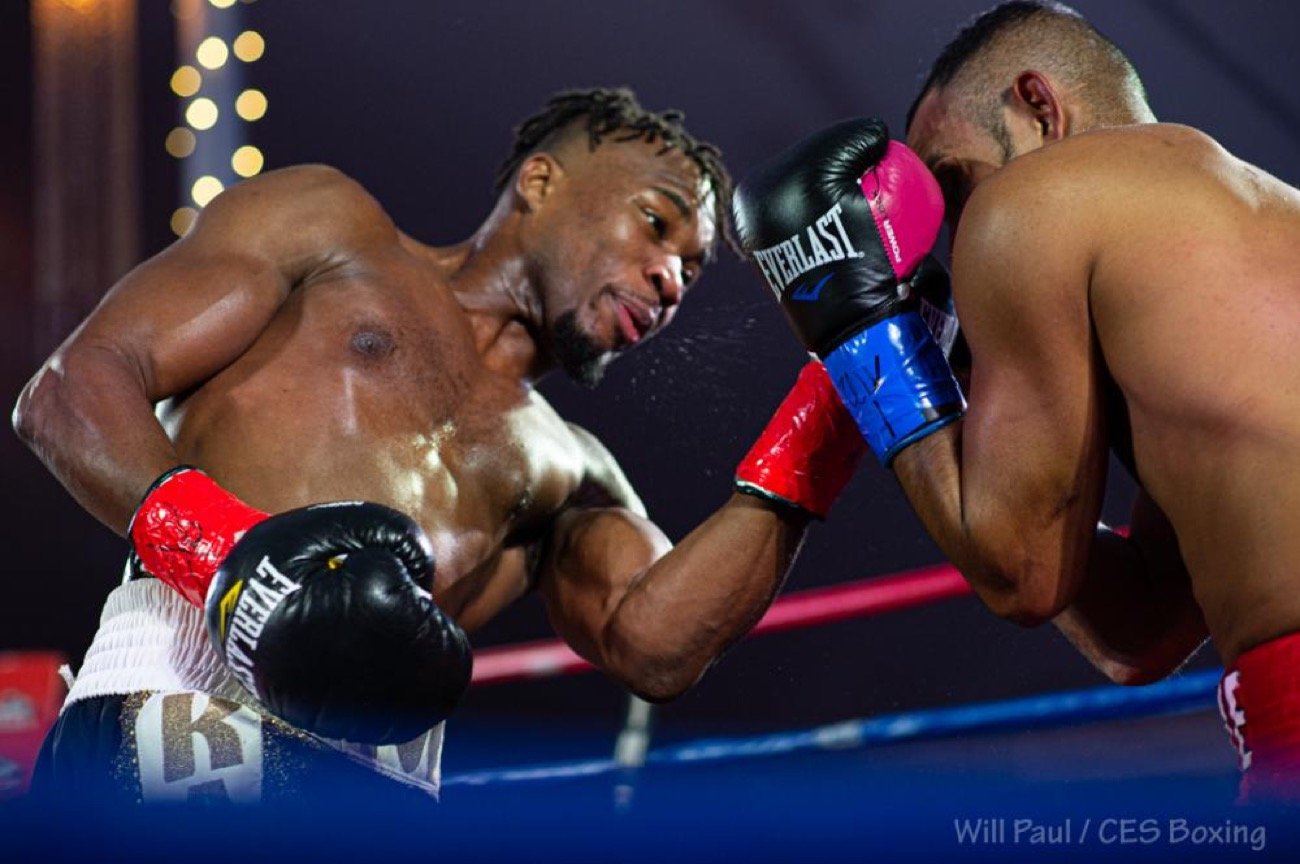 On what felt like the coldest night of the year in Rhode Island, New England’s top fighters brought the heat Thursday in a short, but sweet, pro boxing showcase at “The Tent.”

Fan-favorite Toka Kahn-Clary of Providence scored a second-round knockout victory in the main event and highly-decorated welterweight James Perella won for the sixth time in as many fights as CES Boxing ended its eight-month layoff live from the Crowne Plaza Hotel on UFC FIGHT PASS®.

The event featured four bouts – a fifth, Khiry Todd versus Ryan Pino, was scratched earlier in the day with Todd suffering from a non-COVID illness – highlighted by Kahn’s triumphant return following 14 months away from boxing. The fighters braved the elements, working through bitter cold and a driving wind, with no fans in attendance as many of them returned to action for the first time since the onset of the coronavirus pandemic in early March. For CES, Thursday was the promotion’s first live event since late February, a layoff sparked by the cancelation of its March 12 show on the morning of fight night.

Kahn, now 28-2 with 19 knockouts, faced Colombian challenger Jonathan Perez (38-26), whom he defeated via knockout in California in 2015, in the eight-round main event. Nicknamed “Popeye,” Perez entered Thursday’s rematch with a chip on his shoulder and a loaded resume that featured 30 wins by knockout in addition to five bouts against undefeated opponents over the past three years.

After a slow opening round, Kahn picked up the pace and floored Perez with an uppercut midway through the second. Perez tried to beat the count, but fell face-first back into the canvas, forcing referee Danny Schiavone to wave it off at the 1:49 mark. Kahn has now won three in a row since suffering his second career defeat in 2018, a loss that prompted him to jump from featherweight to super featherweight.

The 28-year-old Perella (6-0) – a decorated amateur, aspiring law student, and part-time actor – received much-needed on-the-job training in a tough bout against “The Mexican Muscle” Antonio Castillo (1-2). Perella had stopped four of his previous five opponents, but Castillo – a three-time CES MMA veteran in addition to his acumen as a boxer – kept Perella off guard with slick head movement and effective footwork. Perella adjusted on the fly, using his reach to keep his distance and stepping back to create space to launch his effective left hook. Castillo kept charging, but Perella won by a score of 40-36 on all three scorecards.

Like Perella, up-and-coming middleweight prospect Francis Hogan (3-0, 3 KOs) of Weymouth, MA, made his CES and FIGHT PASS debut, stopping Washington’s Charon Spain (2-14-2) at the 2:39 mark of the fourth round of a scheduled six-round bout. Only 20 years of age, Hogan was originally supposed to face 14-2 veteran Jeyson Minda in an eight-round showdown, but Minda was not cleared medically, prompting Spain to step to the plate on short notice.

A veteran of 68 pro bouts between MMA and boxing, Spain was a worthy adversary through three rounds until Hogan began to let his hands go in the fourth, scoring a knockdown with a straight left hand midway through the round. Spain tried to survive the closing seconds, but Hogan poured it on, forcing Schiavone to step in and stop the bout at the 2:39 mark.

In the opening bout, rising prospect Elijah Peixoto (3-0, 2 KOs) of East Providence, RI, made quick work of Kris Berberich (0-2), earning the stoppage with lethal body work at 2:42 of the opening round. Fighting for the first time since August of 2019, Peixoto won 119 bouts as an amateur and has each of his last two fights since signing a long-term promotional agreement with CES.