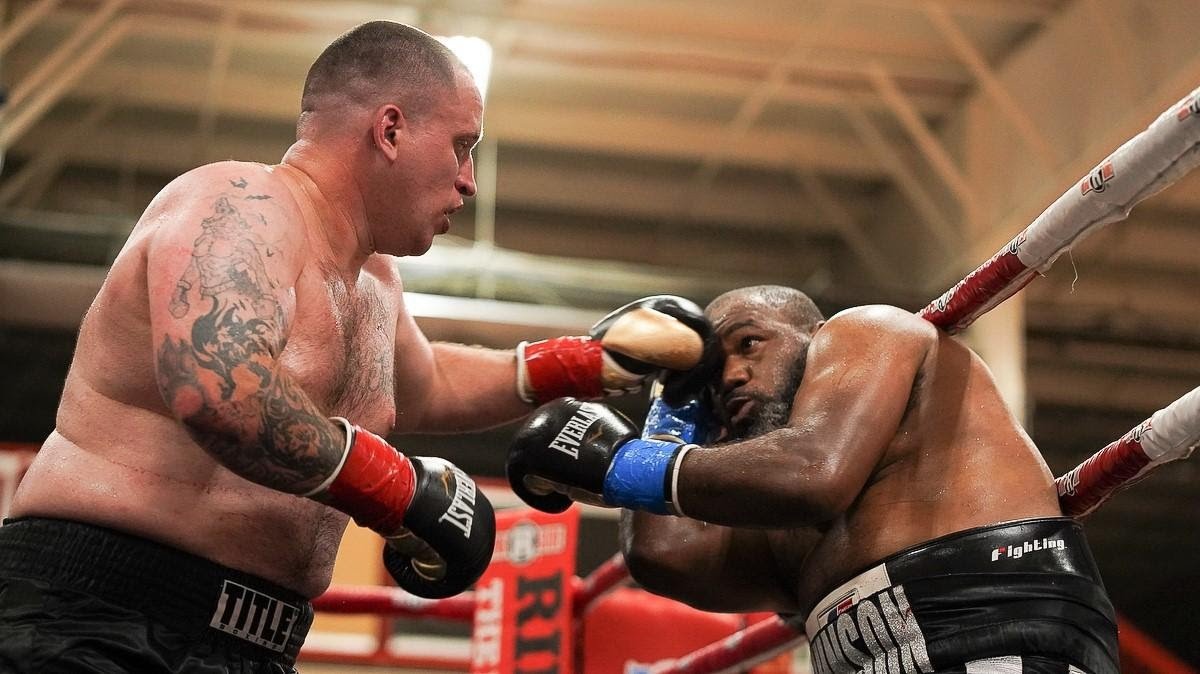 (all pictures courtesy of Emily Harney/Fitography)

“I’m glad that tonight we took a step forward towards normalcy,” promoter Chris Traietti commented. Sports help to bring people together and tonight we had a packed house with people of all races, religions, and creeds. I’m happy these Americans enjoyed themselves here tonight.”

Justin “Crazy Train” Rolfe was crowned New England heavyweight champion by way of an 8-round unanimous decision over Tracey “Titan” Johnson in the main event.

Rolfe vs. Johnson II was a rematch of a 6-round majority draw last November in Quincy, Massachusetts. A lot more was at stake in the rematch, though, because the N.E. heavyweight title was on the line. Boston southpaw Johnson, the half-brother of Andrade, methodically boxed, while Maine-resident Rolfe came forward throwing bombs, and their contrast of styles made for an entertaining fight.

The elusive Johnson started finding his range in the fourth round, connecting with combinations as Rolfe appeared to tire, but he got his second wind and continued to be aggressive, often pinning Johnson on the ropes. The two evenly matched fighters went back and forth in the latter half of the fight, although Rolfe pressed the action and Johnson countered. Neither appeared to be hurt at any point during the bout., Both let loose in the eighth and final round, leaving nothing in the tank. Rolfe’s non-stop attack and turned out to be the difference in this match-up.

DiBartolemeo quickly came out of the corner and soon dropped Jacobs for an 8-count. Jacobs made it through the opening round, but he was unable to avoid the free-swinging DiBartolemeo’s strong right hand, peppering his opponent’s head, in round two. Jacobs settled down in the third, picked up the pace in the fourth, and started letting his hands go more in the fifth, landing more effectively on his aggressive foe. The two fighters went at it toe-to-toe in the final round and DiBartolemeo closed the show.

New England middleweight champion Kendrick Ball, Jr., fighting light heavyweight Tahuk Taylor, displayed his skill set to the maximum, blasting his opponent to the mat with a sweet straight right, again with a beautiful left hook, and he was about to close the show when referee Jackie Morell mercifully ended the fight with 13-seconds left in round one.

Popular junior welterweight Mike “Bad Man” OHan, Jr. did just about everything but stop gritty DeWayne Wisdom, who was penalized two points and officially floored once. But he survived, albeit losing a lop-sided 6-round unanimous decision to Ohan.

New England Golden Gloves champion Francis “Frank The Tank” Hogan dismissed Rashan Wisdom, who went down on the canvas twice before his corner threw in the towel. Hogan is a tall, lanky southpaw who is well schooled and now 2-0 (2 KOs).

In a spirited fight, undefeated light heavyweight Edet “Papito” Mkpanam (4-0, 3 KOs) was relentless against a game Saul “Spider” Almeida, one of the top mixed-martial-arts fighters in New England. Mkpanan dropped Almeida in the first two rounds on his way to a tough 4-round unanimous decision.

Promising Boston lightweight prospect Jonathan Depina outclassed Theo “The Unholy Truth” Desjardin, flooring him early and finishing him off soon after with a blistering shot, to improve to 2-0 (2 KOs).

Middleweight Anthony Concepcion won by way of a third-round disqualification when his opponent, pro-debuting Caleb Denham, ignored the referee’s instructions to continue fighting.

Middleweight Larry “Slomoshun” Smith, fighting out of Dallas, recorded his first victory in more than nine years, taking a 4-round unanimous decision from Jesus “The Juice” Cintron. The 41-year-old Smith, 0-39-2 during his winless streak, dropped Anderson in the first round.

Larry Smith celebrated after his first win in 9 years

Texas light heavyweight Bryan Vera knocked out Mike Anderson with a big right hand early in round one. Referee Leo Gerstel immediately waved off the count right after Anderson hit the mat. Vera, who is known for his participation in The Contender reality television show, has defeated world champions Sergio Mora (twice), then-undefeated Andy Lee and Serhiy Dzinziruk during his 16-year pro career.

Veteran, junior middleweight Cliff “Magician” McPherson had no tricks for Tyrone “Hands of Stone” Luckey because he was disqualified in the second round by referee Morrell for repeated holding.

Opening the night was a cruiserweight match between Larry “Hitman” Pryor and Francisco Neto. It didn’t take long for Pryor, whose cousin was late, Hall of Famer Aaron “Hawk” Pryor, put down Neto with a nicely placed left hook. Neto beat the count but stood on wobbly legs, leading referee Gerstel to halt the fight at the 35-second mark of the opening round.