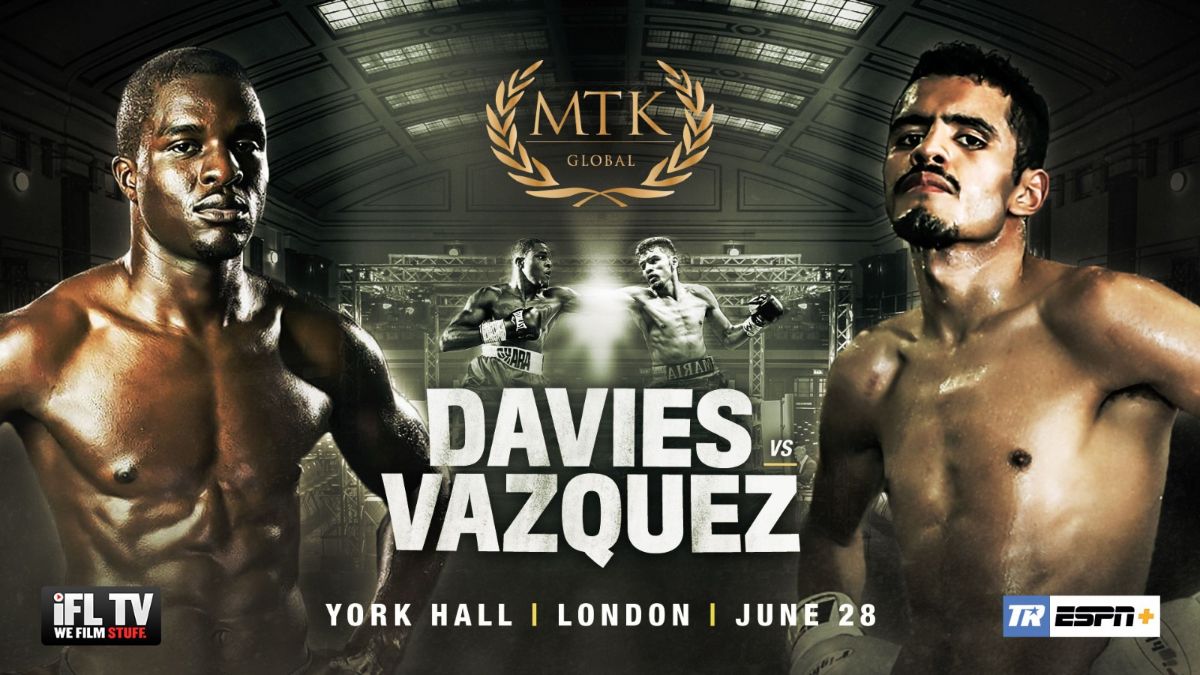 With the highly-anticipated #MTKFightNight event at York Hall just days away, the fighters took to the stage for the final press conference ahead of Friday’s card live on ESPN+ in association with Top Rank and also live on iFL TV.

Unbeaten stars Daniel Egbunike (4-0, 3 KOs) and Martin McDonagh (5-0) stole the show at the presser ahead of their Southern Area title eliminator, with Egbunike involved in a war of words with McDonagh’s trainer Billy Rumbol.

The duo had to be restrained after a heated argument began to escalate, adding more spice to the already tasty battle on Friday.

There was more respect shown among the other fighters at the top table, with Ohara Davies (18-2, 14 KOs) and former world champion Miguel Vasquez (41-7, 15 KOs) headlining this week’s event.

The likes of Sam Gilley (8-0 4 KOs) and Donovan Mortlock (3-0) are involved on the stacked card too, and here’s what they all had to say during Wednesday’s final press conference…

Davies: “The whole arrogant act that I’ve had in the past has been put behind me and I just want to be me. I’m just a normal, humble guy and I’m glad to be on a bill with all of these other amazing names.

“We’re here to put on a show and entertain the fans. I’m facing an amazing fighter in Miguel Vasquez, and I want to put on a great fight. I’m confident of coming away with the victory.”

Vasquez: “This is my first time fighting in England so thank you to MTK Global for putting me in this fight. I want to win this fight and beome a world champion again. Ohara Davies is a good fighter so I know it won’t be easy, but I’m here to win.”

Walsh: “I’ve proven in my career that I’m at my best when I’m active, and I’m more than confident that with MTK Global I can stay active and fight at my peak, which I think I’m coming up to in the next few years.

“My experience is my biggest asset. The last time I boxed at York Hall was also on a Friday night against a Scottish fighter, so the stars are aligning and I like good omens. I’ve become very attached to this British title and I don’t intend on going it up.”

Paulin: “It’s a step up but I’m more than ready for it. You only ever find out how good you are by stepping up and testing yourself against the best. Fighting for the British title is like I’ve hit the jackpot.

“I’ve been sparring really good guys and that’s given me the belief that I’m at this level. This is the first time that I’m going to show it to everybody. If I win this fight then it will change my life. All of the pressure is on him because I’m the underdog going in with nothing to lose.”

Egbunike: “It’s a step up for both of us. He says it’s a bigger step up for me, but he’s only fought journeymen so if he thinks I’m a journeymen he’s wrong.

“I won’t disrespect him for stepping up as we offered this fight to a few people and they didn’t want to do it, so I respect him for taking the fight.”

McDonagh: “It’s a bigger step up for him because I’ve got plenty of experience from when I was an amateur. Styles makes fight and my style will beat his style, so you’ll all see that I’ll get the win on Friday night.”

Yigit: “I can’t wait to steal the show. I fought for a world title and it was my first loss, but I’m not ashamed of that. Since then I’ve been working hard to fix whatever mistakes I’ve made in the ring to make sure they don’t happen again.

“I’ve bounced back and had two victories since then but I’m not where I was, so slowly we are building up again to earn my place at the top.

“It’s an interesting fight. I knew of Ozgul when I used to train in London and I actually saw one of his fights. I always said I would love to fight at York Hall, now I have the chance to do so.”

Ozgul: “When I was offered this fight I was really excited. This is an interesting fight for me and I am very confident in this fight. I’ve had a good training camp and I am ready.”

Gilley: “I’ve trained hard and I am focused. I’m on a card stacked full of fighters, and I’m sat on a top table here with a British champion in Ryan Walsh, a former world champion in Miguel Vasquez, a world title challenger in Anthony Yigit, and a top fighter in Ohara Davies, so I’m buzzing.

“I’m happy with my career so far and I want to do the traditional route. I want the Southern Area, then the English and so on. Whoever has a belt, let’s go.”

Mortlock: “I feel very comfortable when boxing at York Hall. I like it in there and it feels like it’s my home ground when I compete there.

“Being on iFL TV adds more fuel to the fire and makes me keen to impress, because after this fight I’m looking to step up.”

Promoter Lee Eaton: “This is a brilliant card. We’ve got a former world champion in Miguel Vasquez taking on Ohara Davies, who is absolutely buzzing for the fight and has predicted a third round knockout.

“We also have Ryan Walsh making a sixth defence of his British title which is unheard of, and he’s doing it against an undefeated fighter. I can’t wait for Daniel Egbunike against Martin McDonagh too, as both fighters jumped at the chance to fight each other.

“It’s great that they’ve taken this fight at the early stages in their career, and it’s going to be a cracked. It’s a stacked bill all the way through.”

Vazquez (41-7, 15 KOs), a native of Guadalajara, Mexico, previously held the IBF world title for four years before losing to Mickey Bey via a controversial split decision in Las Vegas in September 2014.

Davies welcomes the challenge of facing one of the sport’s craftiest veterans.

Davies said: “It puts me back on the world scene and I feel like that’s where I truly belong. I’m ready to make amends and right all the wrongs from my last fight.

“I know what mistakes I made against Catterall and now I’m going to capitalise. I’ve had a quiet few months since then, but I’ve been training every day, so I’ll be the best me when I get in there.

“Some people said I should fight a journeyman and ease myself back into things, but I know what I can do.

“York Hall is not far from my house. I might even get the bus down there on the night! London is my hometown and I’m comfortable here. I have my friends and family here, and that means a lot to me.”