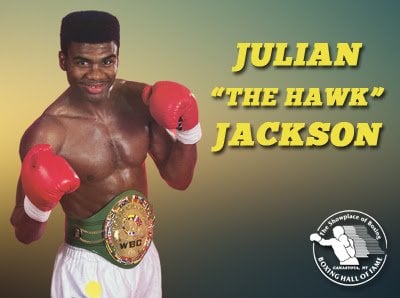 The International Boxing Hall of Fame announced today Hall of Fame two-division champion Julian “The Hawk” Jackson will be in Canastota for the 2020 Hall of Fame Weekend set for June 11-14th.

“Julian Jackson carried dynamite in his fists and his explosive ring style made him a must see star throughout his championship career,” said Hall of Fame director Edward Brophy. “As a Hall of Famer, we are thrilled he will be in Canastota to help usher in the new class of inductees.”

Renowned for incredible punching power in either hand, the 5’ 11 ½” Jackson turned professional in 1981 and scored 29 consecutive victories, 27 by knockout. He won world titles in two weight divisions – junior middleweight (WBA 1987-90) and middleweight (WBC 1990-93, 1995). “The Hawk” owns wins over Buster Drayton, Terry Norris, Herol Graham, Dennis Milton and Thomas Tate among others. Jackson retired in 1998 with a professional record of 55-6 (49 KOs) and an 80% knockout percentage and is universally regarded as one of the hardest punchers of all time. In 2019, Jackson was inducted into the Hall of Fame.

An impressive list of over 35 boxing greats from the United States and abroad, including “Irish” Micky Ward, Ricky “The Hitman” Hatton, Michael “Little Hands of Stone” Carbajal and Humberto “Chiquita” Gonzalez, will participate in the Hall of Fame Weekend celebration.