CARLOS TAKAM says Joe Joyce will be wishing he’s back in the ring with Oleksandr Usyk when he starts landing bombs next week.

Joyce had been sweating on a date with Oleksandr Usyk, but that fell through when Tyson Fury v Anthony Joshua never materialised.

Joyce did fight Usyk in the WSB in 2013 losing on points and Takam told him: “I am a more difficult fight for Joe than Usyk.

“Joe knows Usyk because they boxed before and Usyk knows Joe.

“I am a problem because Joe has never fought someone like Carlos Takam. How am I going to fight him? It’s a surprise.

Both Joyce and Takam are explosive punchers, and the French star predicts that it will be over with the first knockdown.

JULY 24 can’t come fast enough for ‘Juggernaut’ Joe Joyce, who wants to ‘run over’ Carlos Takam before taking the chance to ‘punch up’ Anthony Joshua for the WBO title.

Joyce made clear he’d fight any of the big names but did express a preference for fighting a former Team GB colleague and sparring partner – WBO, WBA and IBF Heavyweight Champion Anthony Joshua.

Speaking to Dev Sahni at yesterday’s press conference, Joyce said: “We’ve had lots of good, competitive rounds in the ring. It’s a good fight, a 50-50 fight.”

Asked what attributes he thinks he’d bring to the bout that could see him better the 2012 Olympic Gold Medalist, Joe added: “My footwork, punch variety, punch durability. Also I’ve got punch power as well so I can trouble him.

“Credit to Joshua though, he’s a great fighter. He’s got a good defence, has high punch output and he puts them together well. He’s got good uppercuts. He’s a strong guy, so it’ll be a tough fight.”

Though, despite the respect he clearly has for AJ’s ability, he left no doubt about his prediction should the pair meet in a competitive setting: “I look forward to the opportunity to punch him up”, he joked.

Joe, a 2016 Olympic Silver medalist in his own right, has forged a path of destruction through the Heavyweight division and, at just 12-0, already has notable scalps on his record including Bermane Stiverne, Bryant Jennings and, most recently, Daniel Dubois.

Losing is not something Joyce understands in the professional game, with his most notable loss coming in the amateurs when, as consensus would tell you, he was robbed of a Gold medal in the Olympic final in Rio against Tony Yoka. 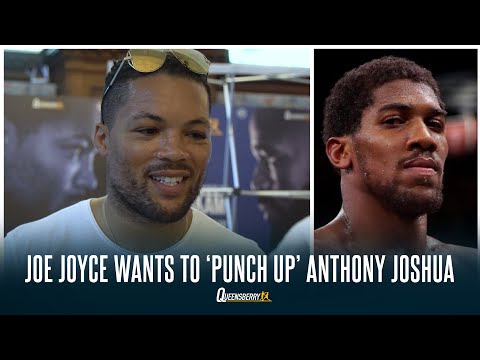 The judging at that tournament in 2016 is now under investigation, though Joe wouldn’t be drawn on the potential for him being retroactively awarded his Gold medal. He did however pour cold water on the suggestion he could rematch Yoka in the pro’s.

“He had his two-year ban” said Joe, “but he did look quite good in his last fight, he looked strong. I don’t think he’s quite earned his place to fight me yet.

“He needs a few more fights yet and hopefully by then I’ll be World Champion and maybe I’ll give him a defence.”

Talks of Joshua or Yoka are questions for the future and the Juggernaut’s immediate concern is a tricky scrap with Carlos Takam on July 24th.

“(Takam) is coming to throw a spanner in the works but I’m not going to let that happen. It’s going to be a tough fight but I think it’s something I can overcome. It’s exciting and this is why I’m in boxing.

“I’m going to deal with Takam and then go on to win a world title and become a World Champion. That’s what I’m aiming for.

“First I’ve got him in my way and I’m going to have to take care of business on July 24th.”

Three further title clashes will take place on the undercard of Joe Joyce v Carlos Takam for the WBC Silver and WBO International titles at the SSE Arena, Wembley on July 24.

There is also heavyweight action featuring David Adeleye (6-0, 5 KOs), while Mill Hill’s George Fox (3-0) will make his Queensberry debut. Reading super-featherweight hope Charles Frankham (2-0, 1 KO) has also been added to the stacked bill., along with ‘The Gent’ Micky Burke Jr (4-0, 1 KO) who also returns after his first stoppage victory in November last year.