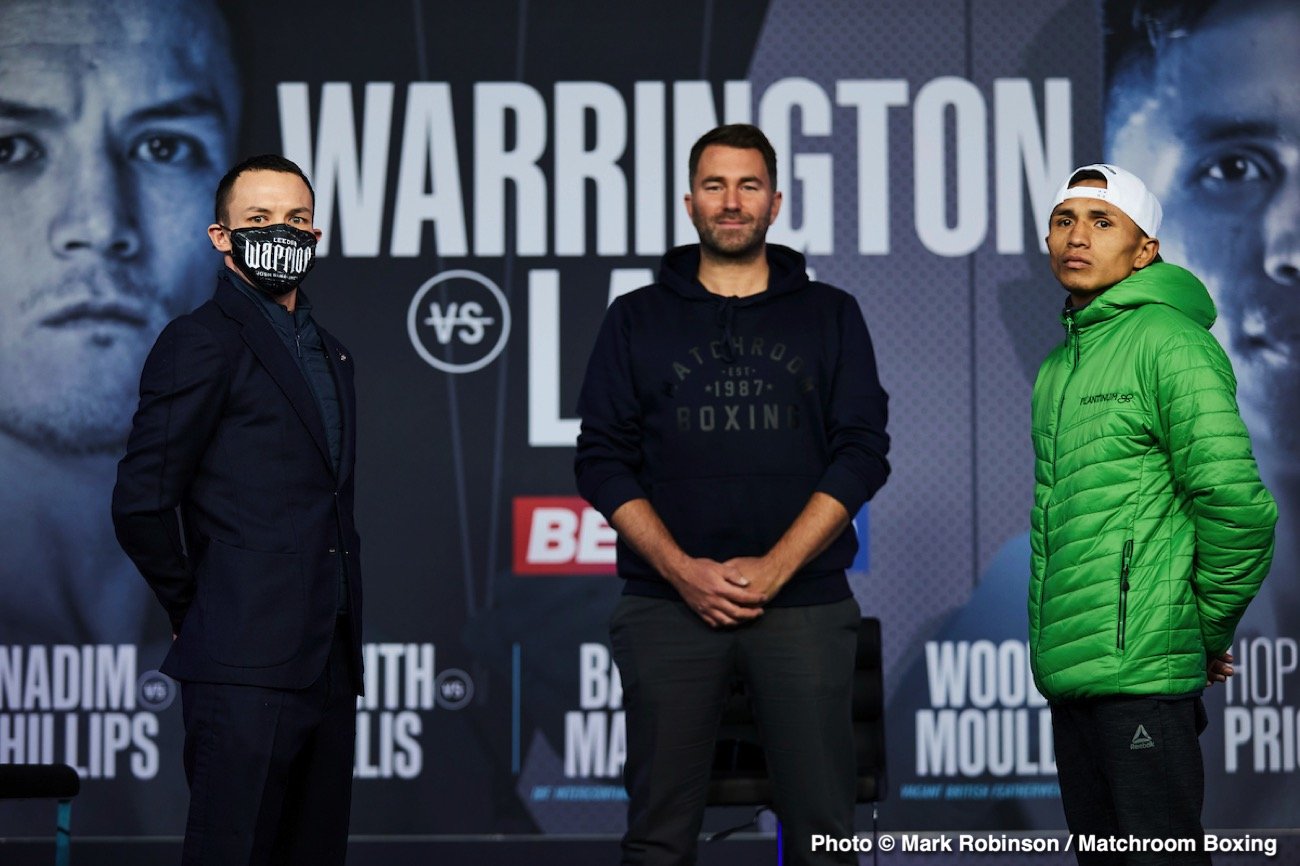 Eddie Hearn: “Thanks Chris, Darren and Andy, joining us live on Sky Sports as well. We are so happy to be back! 2021 here we go. We’re back behind closed doors but it doesn’t matter. This is the biggest year yet for Matchroom Boxing as we go global. The start of twelve shows in eight weeks, in seven different countries. Firstly, this Saturday live on Sky Sports in the UK and DAZN around the world. The return of the No.1 Featherweight Josh Warrington against Mauricio Lara. Kiko Martinez against Zelfa Barrett, Reece Mould against Leigh Wood, Dalton Smith against Ishmael Ellis, Hopey Price against Mendoza and this one to kick us off, Ibrahim Nadim against Jonny Phillips.”

“He’s got a better knockout ratio than I have. But can he do the 12 rounds as well as I can? Has he got as much experience? I don’t think he can. But that’s up to me to expose that. He’s got punch power but, if I’m not there to be hit, he’ll be hitting thin air. It won’t go past six rounds. I strongly believe that. The way I’ve been hitting with 16oz gloves on? When I then put the 8oz gloves on and see the gaps in his defence, I expect an early night. But I’m experienced over 12 rounds. I’ve done marathons. I can do it at a good pace. This man here has no pressure. He is full of Mexican pride. I’m a big fan of Mexican fighters and how they wear their hearts on their sleeves. He will bring it but I wouldn’t want it any other way. This guy is a real puncher. He will bring it, which will tune me up nicely for the fights down the line. Make no mistake, I’m treating him like a monster because I can’t afford a slip-up.”

“Thank you very much. Thanks for the invitation. It’s a lovely country that you’ve got here despite the fact that we haven’t been able to go out at all. It is a great opportunity for me and Josh Warrington is going to face a really tricky fighter in me. I’m also aware that I’m coming up agains the No.1 ranked fighter and it’s my opportunity to show the people of Mexico and everyone what I can do. I enjoy coming for war. We’re going to clash in the ring, that’s definitely going to happen. I’m looking forward to it. From the first bell I will be looking for the knockout. If it goes the distance I’ll be ready. I’ll be ready for whatever comes. I’d love to make history on February 13th, to take this victory home to Mexico City. It is a huge opportunity and I’m really looking forward to taking advantage of it.”

“I’m ready. I’m more than ready. I respect Kiko for what he’s done in the sport. He’s fought the best. I believe that I’m one of the best. It’s my time to shine and to show how good I am. Styles make fights. When I fight another guy like Eric Donovan, slick and tricky, I’ll learn from that. Kiko is coming, I know he’s coming, I can see him coming now! We’re ready for what he’s going to bring. Fight Camp was a good experience and Eric Donovan was a good fighter. I’m ready for anything. However he comes out I’ll just work on that. I’ll do what I’ve got to do. I know what he’s coming to do. He’s coming to fight. He’s coming for war. We’re ready. I know what I want and I know where we’re going. Kiko is a good fighter and beating him will put me in a good position.”

“It’s great to be here. Thank you very much for giving me the opportunity to be here again. It is true, we’ve had some great nights in the past. This is a huge fight for me, and the opportunity for me to make history, to be one of the few people that have won Titles in three different weight classes. I’m very excited and prepared to face a really good fighter in Barrett on Saturday. It’s to make history, to make history in the ring. I’ve never been content with money alone, the only thing that makes me happy is being active as a fighter. It’s about doing all that I can, and giving my all every time that I step into the ring. I’m super prepared. Extremely prepared.”

“I’m extremely confident of winning that British Title on Saturday night. New trainer, not so much new things. Obviously there’s only so many punches in boxing that you can learn. The perception of it, how you look at it, how you view it, how you set things up, keeping my base, just fundamentals. Drilling it and drilling it thousands of times. I’m really feeling confident ahead of Saturday night. I’ve said a few things that he’s taken as disrespectful. I’m not disrespecting him. I rate him, he’s a good fighter, 13-0, in and out of a gym with a World Champion. I’ve heard a lot of sparring rumours as well. I just believe that anyone I’m in with on Saturday night, I’m coming away with the win. I spent most of my career on my back foot. Dancing around, switching and moving. It’s one way of boxing but with my power, Ben was scratching his head at why I wasn’t using it. We’ve changed things in sparring and it’s coming together. Everyone that has ever taken me on the pads can vouch for me that I’m a big puncher. There’s more to boxing than punching. You’ve got to set it up. You’ve got to be smart. That’s what we’ve been working on.”

“Boxing is all about timing and I believe this is the right time for this fight. I’m going to win this fight and go onto bigger things. I’m looking forward to it. I’m not expecting an easy night. I’ve said all along that it’s not going to be an easy fight. If Leigh comes to bring it and trade with me then I believe I’ll get him out of there early. We’re going to push him all the way. I’m expecting Leigh to bring his best. He’s got everything on his shoulders for this fight. He’s got to win the fight so he’s going to bring his best, but I believe my best beats Leigh Wood’s best.”

“I’d have like to have got out before the end of last year but I got COVID-19 so we had to take our time. I’m happy that I’m back out on the first card of the year. This isn’t the fight that we originally had scheduled in but again, we can’t argue with that, it’s nobody’s fault. Now I’m facing Ishmael Ellis who is a lively opponent. I didn’t want anyone to step in as just a knock-over. We managed to get a lively opponent and we’ve got a good fight on Saturday. These guys facing me have got everything to gain and nothing to lose. For me, mainly I’ve got everything to lose. There’s a lot of pressure in these fights but this is the game we’re in. I want to keep on propelling my career further and further up. I’ve got to take these challenges. I think the better my opposition gets the better you’ll see of me.”

“I’m 100% here to win this weekend. Thank you for the opportunity again. Thank you Dalton as well. It’s a massive opportunity for me. A lot of fighters have been turning these opportunities down but us underdog fighters can’t be turning down these opportunities. I do believe that I can give him a good fight on Saturday night. I took that loss last year. It was my own fault. I wasn’t really prepared for the fight, I was out of training. The opportunity came and I was just eager to fight. I just want to keep on going. I’ve had a bit more time to prepare for this one. I haven’t taken this fight just to go down in the first round and leave. I’ve come here to prove myself and gain something from this.”

“We’ve been back and forth with a few different opponents. I’ve just got to concentrate on doing my job on Saturday night. Now I’ve finally got an opponent I can just go out there and do what I’ve been working on in the gym. Obviously we have to move a bit quicker because of the pandemic. Me and Dave feel like I’m ready to move quicker anyway. I think with my ability and my boxing brain I’m ready to do so. These sort of fights are great experience for me for when I do eventually step-up. Having Jonny Phillips as my third fight has helped me improve as a fighter. I think I just need to keep taking these step-ups. That’s what is going to get me to where I need to be in the end.”

“I’d like to thank god first and foremost for being here. Thanks also to the promoters. It is true that I really like tough fights and it is going to be another one on Saturday night but I’m really looking forward to it. Whenever I go into the ring it’s not about fighting, it is about winning. I always give my best and I have great heart. I will be doing that in the ring.”

“Firstly I’d like to thank Matchroom and Sky Sports for the opportunity. It’s good to be back boxing again. It’s a tough test but I’ll be ready for whatever he brings. It’s been frustrating, but if you look at the positive side of things, it has given me more time to learn in the ring. I’m prepared for whatever he brings. I want to be in exciting fights like this.”

“This time you’ve given me four weeks’ notice not four days! I’ve managed to make the weight quite comfortably. I made it at the start of the week. Mentally, we’re all there. Everything is in place now. I felt good in that last one but it was rushed and it was my first time being on Sky. That was hyped up. Now I’m used to it all. I’m buzzing, I cannot wait to get in there. I’m not in this game for money or fame. I want glory. I want to end my career with any belt. Beating him is going to hopefully put me a step closer to you offering me a Title fight.” 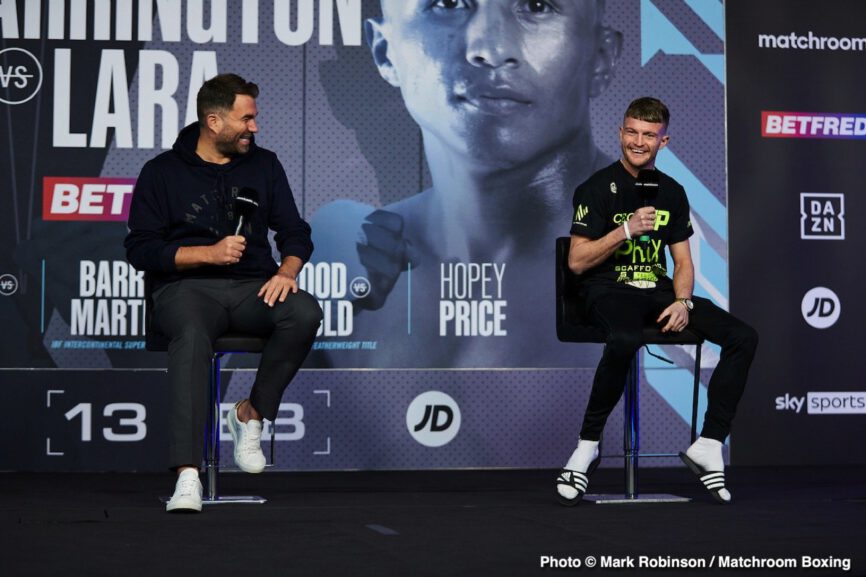 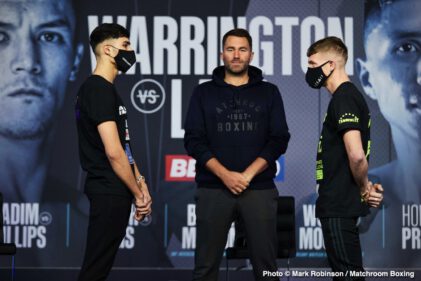 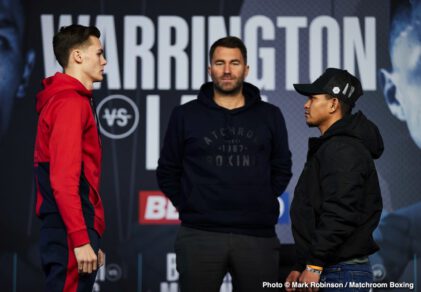 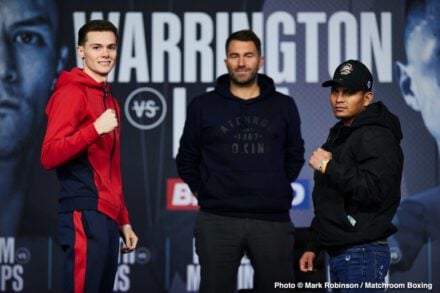 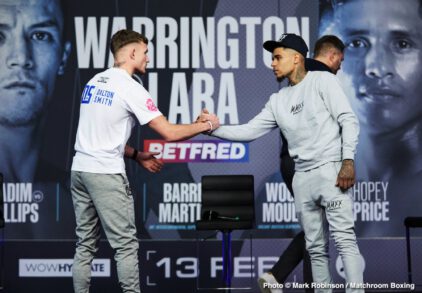 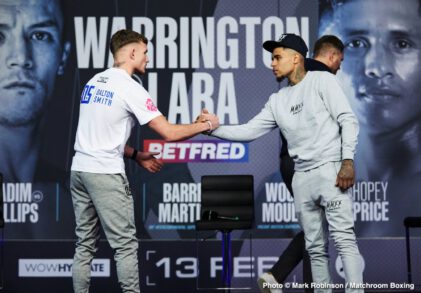 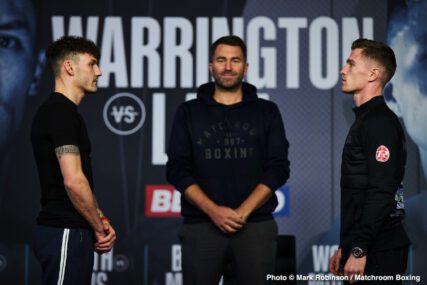 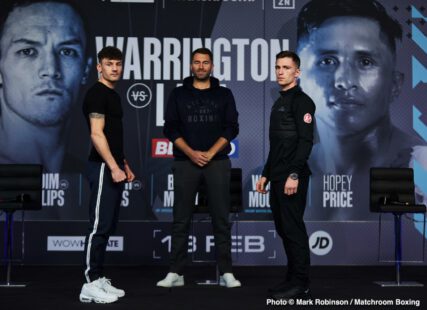 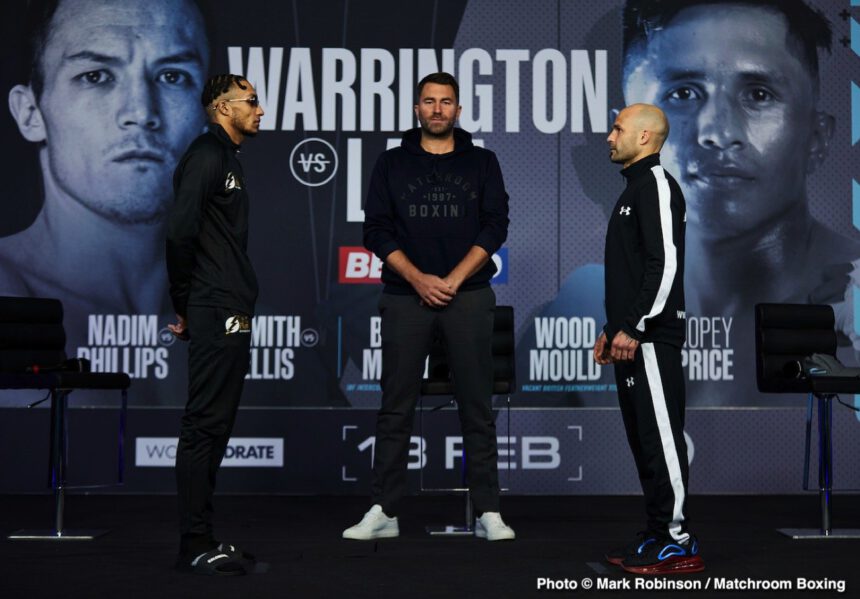 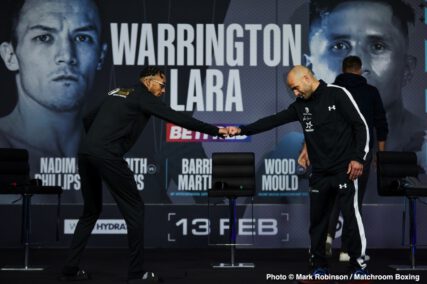 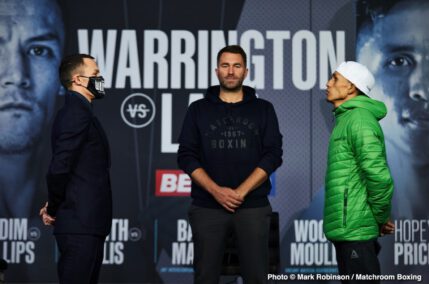 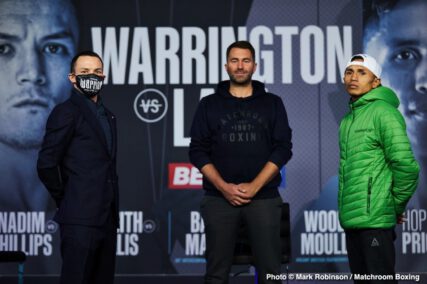 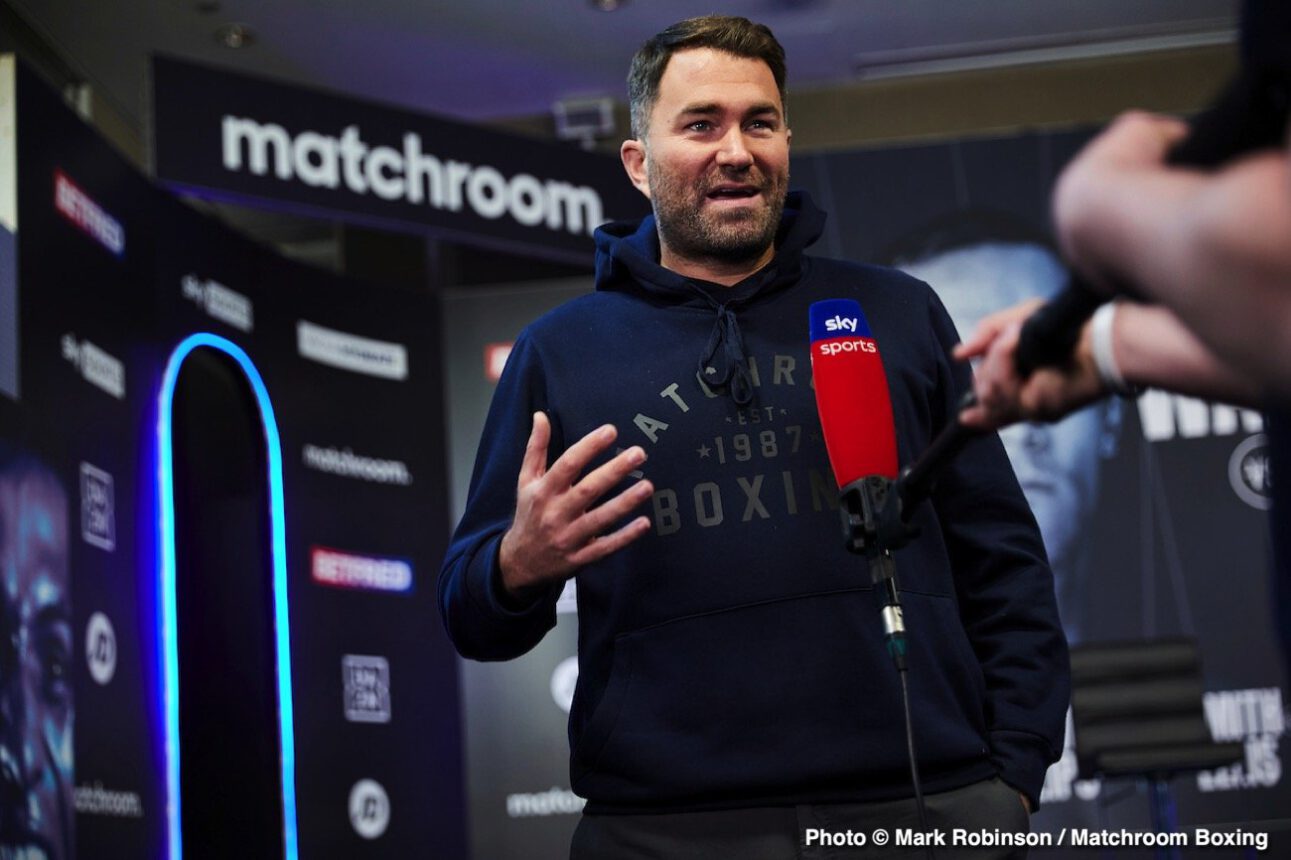