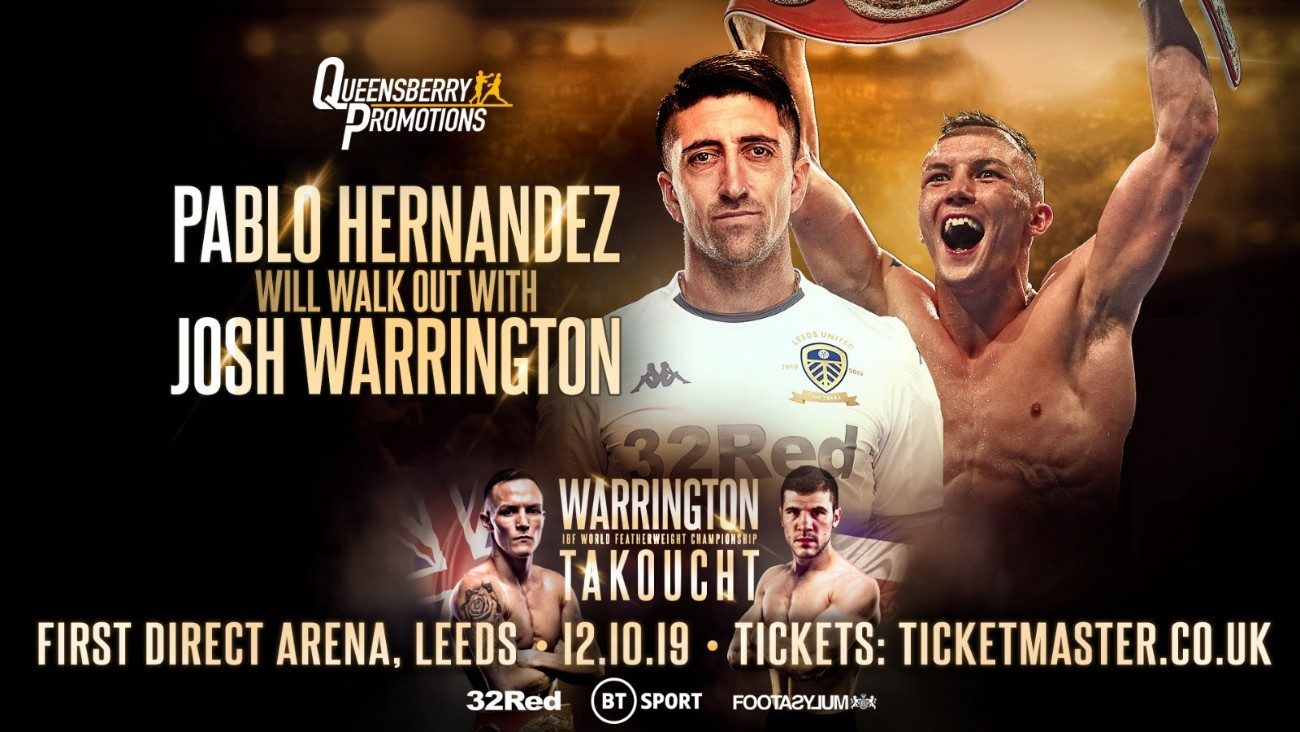 The club’s all-time great Lucas Radebe led the ring walk in Warrington’s title winning performance against Lee Selby in May 2018. Now it is the turn of the club’s current Player of the Year Hernandez.

Spanish midfielder Hernandez and several other Leeds United players will be roaring on Josh from ringside when he face France’s Takoucht.

Warrington who rarely misses a match when his team are playing at home said: “Pablo is our own Spanish magician so to have him holding my belt and getting in the ring with me, wow.

“It is great that several of the players can make it because it was the close season when I beat Kid Galahad in the summer and they had a match the next day when I boxed Carl Frampton.

“Leeds United are such a huge part of my life so it’s inspirational having the players watching me box. It’s mad because these are the fellas I cheer every weekend as a fan.

“Having Lucas as part of the ring walk when I fought Selby was something else and having Pablo there fires me up for Takoucht.”

Hernandez has been sidelined with injury, but expects to return later this month and Warrington added: “The reaction I got when I put on Twitter that Pablo was part of my team this weekend was amazing.

“Just imagine the noise this weekend. Takoucht will have never heard anything like it.”

The big night of action in Leeds is headed by local hero Josh Warrington (29-0, 6KOs) who makes the third defence of his IBF featherweight championship against France’s Sofiane Takoucht (35-3-1, 13 KOs). Zelfa Barrett (22-1,13KOs) will make the first defence of his Commonwealth super-featherweight title against exciting Scot Jordan McCorry (18-6-1, 4KOs). In a third title clash Manchester’s Lyndon Arthur (15-0, 12KOs) faces Ghanaian Emmanuel Anim (14-2-1, 12KOs) for the vacant Commonwealth light-heavyweight crown , in a battle of the big hitters.