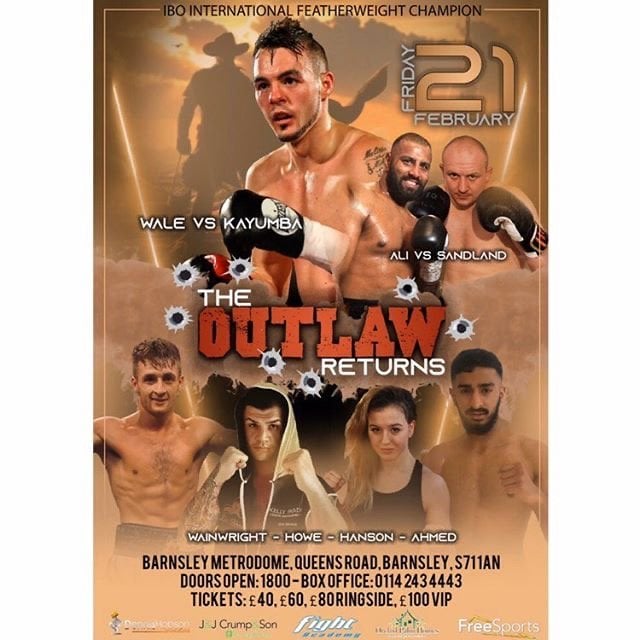 Dennis Hobson Promotions’ first show of 2020, on February 21st at the Barnsley Metrodome, will be headlined by popular local fighter, Josh ‘The Outlaw’ Wale, taking on Tanzania’s Iddi Kayumba.

Wale, the former British Bantamweight Champion, is now operating up at featherweight and picked up the International Boxing Organisation (IBO) International Title in his last fight, in November.

Josh, 31, has lost just 11 times in 43 outings, in a career that has seen him in the ring with some of the UK’s best fighters, including 2019 world title challenger Kid Galahad, and former world champion Stuart Hall.

Kayumba has lost twice in 16 bouts, with seven of his wins coming by KO. The southpaw has only fought outside his home country once previously, losing in five rounds to Britain’s Prince Patel for the African Boxing Union Bantamweight Title in Cairo, last August.

With another Barnsley show lined up for Josh in June, Promoter Dennis Hobson has revealed that he hopes to see Wale emerging onto the world title scene eventually, but reminds that the Barnsley man needs to keep his eye on the ball and dispatch of Kayumba accordingly.

“This is another international fight for Josh where we can continue to manouvere him into a position for a major title, or into a final eliminator for a world title,” explained Hobson. “In an ideal world, that’s what we’re looking to do because he’s having an Indian summer. He’s still got plenty left, he’s exciting to watch, and is Barnsley’s most successful fighter. I believe there’s more titles to come that will cement his legacy, and hopefully I can deliver them for him.

“I’ve heard Kayumba was weight-drained in his loss to Patel, so I don’t think you can tell much from that fight. He’s got a good record and is a credible opponent. It’s a homecoming for Josh, the atmosphere will be tremendous and it will be a smashing night. Josh has wanted to fight in his hometown for a while now, and hopefully we get the result that we think we will. We’ve then got another Barnsley show booked in June for Josh, and hopefully we’ll move onto somewhere near the world scene then. This fight will give us a platform to help us achieve that, if he comes through it. It’s not a given though because the kid’s got a good record.

“The Metrodome, especially when Josh fights there, will be electric. He’s a very popular kid, and Barnsley really gets behind him. Josh and his dad are both great to work with, and if anyone can pull something out of the bag for him on the world scene, then I believe I can. But he’s got to keep winning and progressing.”

Dennis Hobson Promotions presents an evening of boxing on February 21st at the Barnsley Metrodome. Headlining will be Barnsley’s Josh Wale against Tanzania’s Iddi Kayumba.