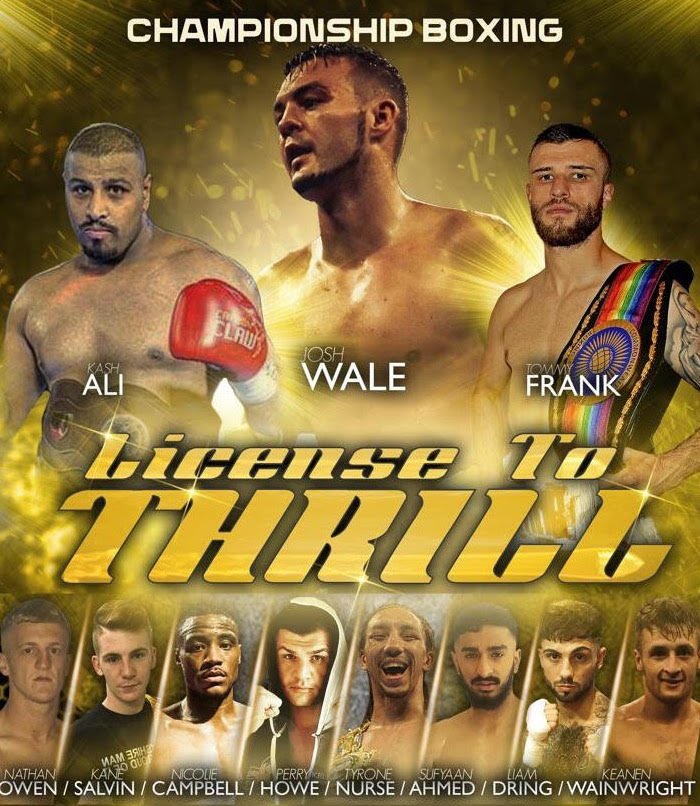 Turning pro in 2006, the 31-year-old has previously claimed the Central Area Super Bantamweight belt, as well as the British Bantamweight Title, and now gets the chance to win the International Boxing Organisation (IBO) International Featherweight crown at Sheffield’s Ponds Forge Arena.

The Barnsley favourite, 29-11-2 (14), will take on Ghana’s Felix Williams, in a co-headline spot alongside local man, Tommy Frank.

Josh’s African opponent, on paper, looks a real handful. Williams has lost just once in 28 fights, KO’ing 20 of his opponents and, although the Accra-based fighter has never fought outside of his home country, he will come to the UK knowing a win over Wale could be career-changing.

In 42 outings, Wale has earned a reputation as a man who is never in a dull fight. The genial Yorkshireman says he feels great fighting up at the 9st limit, and is predicting another exciting dust-up when he meets Williams.

“I’m over the moon to be fighting for the IBO belt; it’s a good title, and a good belt to win at featherweight,” said Josh. “We’re moving in the right direction. I’ve had two good performances at 9 stone, and want to keep progressing. I’ve won Central Area, English and British Titles, and I’ve earned the right to now go onto the international route and see how far I can go.

“He’s a good opponent, with a good record, but the way I’m performing at the moment if I bring my best then I’ll do a job on him. It’s definitely going to be a good fight. Throughout my career, I’ve always been known as a fan-friendly fighter, and I’m glad to have that reputation. If someone’s paying good money to watch then they want to see a fight, not two people running around the ring trying to score points. I’ve had a big fan base for a long time because they know with me they’re going to get a fight.”

Undefeated Tommy Frank says he is overwhelmed with the support is getting in his home city of Sheffield, as he prepares to co-headline at the Ponds Forge Arena on November 29, live on Freesports (Freeview 64; Sky 422; Virgin 553; Freesat 252; TalkTalk 64; BT 64).

The huge Sheffield United fan received a rapturous reception at the weekend, when he was introduced on the Bramall Lane pitch at half time, in a game that saw the ‘Blades’ beat Burnley 3-0.

Tecuapetla is far more experienced than Tommy, with a ledger of 15-11-4 (10). The Mexico City native has knocked out 10 opponents, only been stopped twice in his 11 career defeats, and fought for the IBF World Light Flyweight belt in 2016, losing a split decision verdict in Japan. The 29-year-old also went the distance with former world flyweight champion, Cristofer Rosales, as recently as 2017.

Co-headlining alongside Tommy, will be Barnsley’s Josh Wale, 29-11-2 (14). The former British Bantamweight champion, and European Title challenger, is now campaigning at 9st and will face Ghana’s Felix Williams for the IBO International Featherweight crown. Wale, who is always in an entertaining fight, could have his hands full with Williams. From the city of Accra, the African has lost just once in 28 fights, and KO’d 20 of his opponents.

“It’s always an honour and a pleasure to be invited down by Sheffield United, and to go out on that pitch,” said Frank, 26. “It’s not just the Blades fans, but it feels like all of Sheffield is starting to get behind me, and I’m really happy I can give the people of Sheffield something to follow.

“This is just the start of my journey too, we’re moving onto the bigger fights, and it’s a great feeling to have my home city behind me. The city has had some great champions, and I want to take Sheffield back up the boxing ladder again.”

Tommy Frank goes into the unknown on Friday, September 20, when he faces Thailand’s Aran Dipaen at Sheffield’s Ponds Forge Arena.

Not much is known about the Thai fighter, but it seems that he pack a punch. The 28-year-old has been fighting professionally for less than a year but has already knocked out five opponents from his six wins, including an ‘on the road’ victory in Japan. Dipaen’s only defeat was in March, when he was having just his third fight.

Tommy, a huge Sheffield United fan, cannot afford to slip up if he is to go on and fulfil his ambition of fighting for a world title at Bramall Lane. Last time out in July, the 24-year-old stopped Tanzania’s John Chuwa in seven rounds, the only time the African, 17-4 (9), had been finished early. Ahead of his bill-topping appearance at Ponds Forge, trainer Glyn Rhodes is warning his protégé that he will need to be fully focused on the task ahead.

Also co-headlining on the show will be the former British Bantamweight Champion, Josh Wale. The Barnsley favourite will be having his second fight at featherweight, where he is now competing and on the hunt for titles.

“It’s another unknown opponent, and all we can do is the same as everyone else, look on YouTube and look at his record,” explained Rhodes. “He looks like he’s a puncher, but what happens with these kids is that some come over and can be rubbish, while others can be real banana skins. So Tommy has to take this as if it’s a world title fight. He’s trained really hard, is on fire, has sold lots of tickets and is topping the bill in his home town – how good is that!

“The thing with these Thai guys too is that he might have only had seven pro boxing bouts but we all know that he will have grown up doing kick boxing and Muay Thai. He could have had a hundred Thai boxing bouts, so we really are in the unknown. But if Tommy is going to move to the next stage then he has to be beating kids like this.

“People have said to me that Tommy can’t punch, but he can. I see it in the gym and he hasn’t even got his man strength yet. The other thing he’s developing is confidence too. Whereas before he was a jab and mover, now he’s happy to plant his feet and let his shots go, and his last two fights have been stoppages. That’s what confidence does for you, we’re not looking for a stoppage against Dipaen, but if it comes then all well and good.”

After previously winning belts at bantamweight and super-bantamweight, Josh Wale is on the hunt for titles at featherweight to top off an already successful career.

The former Central Area Super-Bantamweight Champion, and British Bantamweight ruler, will have his second outing at featherweight on September 20 at Sheffield’s Ponds Forge Arena, live on Freesports.

Last time out in July, his first fight up at 9st, the Barnsley favourite took less than a round to stop Ghana’s Ekow Wilson in an impressive performance. To give that display some context, in just his previous fight (September 2018), Wilson had taken former IBF World Bantamweight Champion Joseph Agbeko 10 rounds.

This time out, Josh – who has 28 wins, 14 KOs, from 41 fights – will face Sergio Gonzalez. The Spanish-based Nicaraguan has lost 17 times in 36 bouts, and will be familiar to British fight-fans after recent duels with Archie Sharp and Leon Woodstock Jr.

Also headlining on the show will be local favourite, Tommy Frank, 11-0 (3). The current Commonwealth Super Flyweight Champion will face Thailand’s Aran Dipaen, 6-1 (5), in an international contest.

“He’s an experienced guy,” stated Wale, 31. “I’m having my second fight at featherweight and am just growing into the weight. Last time out was a good win against a decent opponent, this time it’s about keeping moving forward, getting a win and hopefully then moving on to title fights.

“He’s boxed a lot bigger guys than me. He’s been the distance with Woodstock Jr who’s up at super featherweight. But I’m confident in my power and if I catch anybody right, I’ll hurt them, as I have done throughout my career.

“If it goes the full rounds then I’m happy with that, but I’m just thinking about the performance. It’s all about having another good performance at featherweight. It’s one fight at a time, but I want to put on a good performance, then push on and fight for another title and become a three weight champion.

“I’m really looking forward to this show. I take a great following wherever I go, as I will do in Sheffield at Ponds Forge, but we’re talking with Dennis [Hobson] about me headlining again in Barnsley. When I box at home it’s something else, so that’s what we’re looking at in the future.”