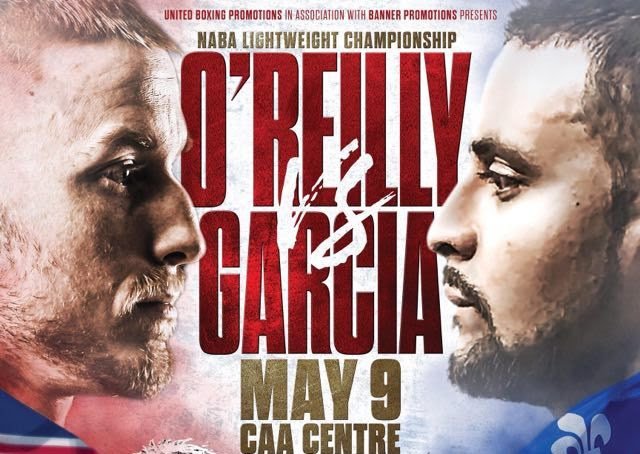 “It’s make or break for both guys,” said UBP’s Tyler Buxton. “Josh needs to keep proving himself to get that elusive world title shot. Golden needs to win a fight like this to break into the rankings and continue his own journey to the top. I think it will be the toughest fight of both guys’ careers.”

O’Reilly won his NABA title against Alberta’s “Irish” Cam O’Connell (17-3-1, 10KOs) last January and successfully defended the honor against Oscar Mejia (14-4-1, 6KOs) of Mexico in May. Coming into this contest, O’Reilly is ranked #7 by the World Boxing Association, sitting within striking distance of champions Vasyl Lomachenko and Gervonta Davis.

Rashid Kodzoev Returns to Action on Tuesday in Moscow

“I’m knocking on the door of a world title,” explained O’Reilly. “I’m very close to some big things. Golden has a lot to gain in this fight and he’ll come in ready to win. I’m excited! It’s an intriguing matchup for the fans. Golden is a tough, game fighter, who can really punch. I’m looking forward to a tough training camp, I’m going to need to be sharp. We are going to be in the best shape possible and come out aggressive. I am looking to get the stoppage, then land some bigger fights when I’m done with Golden.”

Garcia shook up the west coast fight scene last year, battling Hector Garcia (14-7-4, 8KOs) of Tijuana, Mexico, to a draw in California. Far better than his record suggests, Hector Garcia previously went the distance with both Devin Haney and Juan Carlos Burgos. The O’Reilly fight, however, is a different animal entirely. With a convincing victory, the Montreal battler could leap onto the world boxing radar overnight.

“From what I’ve seen, O’Reilly always looks sharp,” said Garcia. “He’s tall and rangy, but seems like he’s comfortable fighting from the outside or even in closer. Either way, I’ll have to be at my best to beat him and I think we’ll give the crowd a good fight. It’s a really good opportunity for me to start making a name for myself. Things were slow for me in 2019, so I want to remind everyone who I am and why I’m still unbeaten. Plus, boxing fans these days seem to love shiny belts, so that title should help me get bigger and better fights down the line.”

Additional fights will be announced in the coming days.