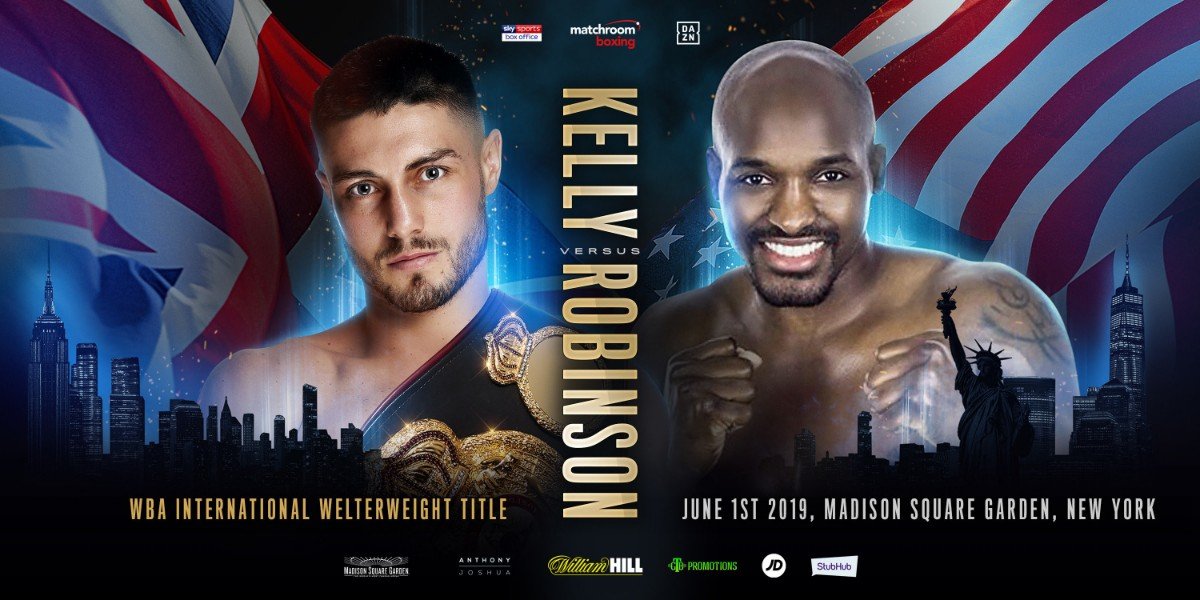 Josh Kelly will make his US debut against Philadelphia’s Ray Robinson on the undercard of Anthony Joshua’s Heavyweight World title clash with Andy Ruiz Jr. at Madison Square Garden in New York on June 1, live on DAZN in the US and Sky Sports Box Office in the UK.

Kelly was due to face former World Champion David Avanesyan on the undercard of Kell Brook vs. Michael Zerafa in Sheffield, but an illness scuppered a December dust-up between the pair. A showdown with the now European Champion is at the top of Kelly’s wish list should he come through his test against Robinson.

Robinson (24-3-1, 12 KOs) has lost only three times in his 28-fight career, one of those losses coming to current WBC Welterweight World Champion Shawn Porter in 2010, and the 33-year-old southpaw earned an impressive draw in his last outing in March against the undefeated and World rated Egidijus Kavaliauskas.

“To be boxing at the Mecca of boxing Madison Square Garden is pretty serious isn’t it,” said Kelly. “I’ve never been there before so I’m going to enjoy the experience and put a performance on. To be fighting at a venue like that so early on in my career is another box ticked on my journey.

“Things change and titles switch hands but the majority of World titles are held in the US at the moment so I could end up boxing there a lot more in the future. I just take things fight by fight and I never overlook anyone because I’d be doing myself and my opponent an injustice.

“Robinson is a very good opponent. He’s a good boxer with an awkward southpaw style so it’s another good test for me. It’s going to be a great fight and a night to enjoy. I get a lot of support from people in the US so it’s nice to have an opportunity to put on a performance in front of them.

“What happened with the Avanesyan fight was unfortunate but it’s a fight that’s still 100% on my radar. Adam has got a plan for it and I’ll just go with what he says. It’s definitely more than likely going to take place. June 1 is going to be the start of something big.”

“This is a great fight and a huge step-up for Josh on the biggest stage possible,” said promoter Eddie Hearn. “Robinson clearly won last time out and is an accomplished fighter that will test him in every department. This is the stage for him to shine, in front of a sold out MSG broadcast all over the World – June 1 we will really find out what PBK is all about.”

Adam Smith, Head of Sky Sports Boxing, said: “Josh Kelly is one of the hottest talents in Britain – and Madison Square Garden is a perfect venue for him to showcase his skills.

“We’ve covered Kelly’s exciting career from the very start. ‘PBK’ can now show American fans why he’s a name to watch in that red-hot Welterweight division.

“It will be a bumper evening of boxing as Katie Taylor bids to become the undisputed World Lightweight champion, and then AJ can mark his US debut with a bang against Andy Ruiz Jr!”

Kelly and Robinson clash on a huge night of action at Madison Square Garden where Joshua’s World title defense against Ruiz is supported by Irish sensation Katie Taylor clashing with Delfine Persoon for the undisputed Women’s World Lightweight championship and Chris Algieri and Tommy Coyle meeting in a crossroads Lightweight fight – with more undercard fights to be announced shortly.