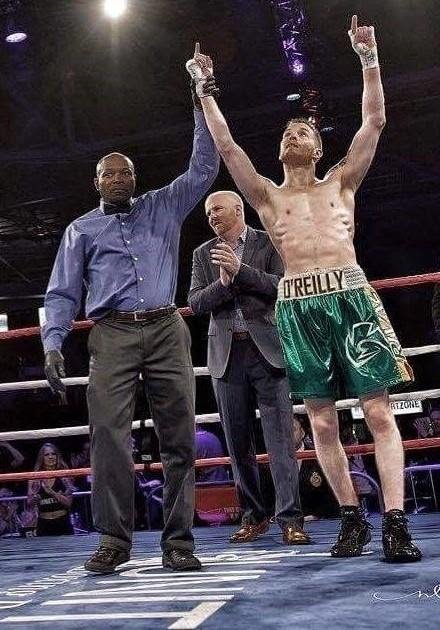 “I’m excited to headline because I’ve always felt it would be cool to fight on St. Paddy’s Day, in the main event, close to home and defending my title” O’Reilly said without a hint of an Irish brogue. “I’m very grateful for the opportunity and looking forward to putting on a very good performance for everyone.

“My goals for 2018 are to keep improving, I’d like to be in some domestic fights and then set myself up on the international scene early next year.

“Josh had a breakout year in 2017,” O’Reilly’s promoter Tyler Buxton commented. “He came into the year with only one knockout in seven fights. In 2017, after moving up in weight and competition, he stopped all three opponents. Josh proved he’s one of the top lightweights in Canada and, in 2018, we’re looking to prove he’s the best in the country.”

“Our St. Patrick’s Day event is going to be a great night of fights with Irish Josh ‘Dubs’ O’Reilly as the headliner, defending his IBA International title,” Buxton added. “Also, Irish boxers Tim Cronin and Cody Kelly will be in action, so it’s safe to say the boys in green will be out March 17th at Hershey Centre. The undercard is packed with the likes of former IBF International Heavyweight Champion Franz Rill, pro debuts of the gold medalist and 2017 Best Boxer of the India’s Super Pro Boxing League, Sukhdeep, and hard-hitting native Canadian Karl “The Razor” Hess. To top off a stacked card, World Series of Boxing Russian Team member Andranik Grigoryan will be making his first visit to Ontario.”

Tickets, ranging between $150.00 and $20.00, are available at the Hershey Centre box office or online at www.ticketmaster.ca.