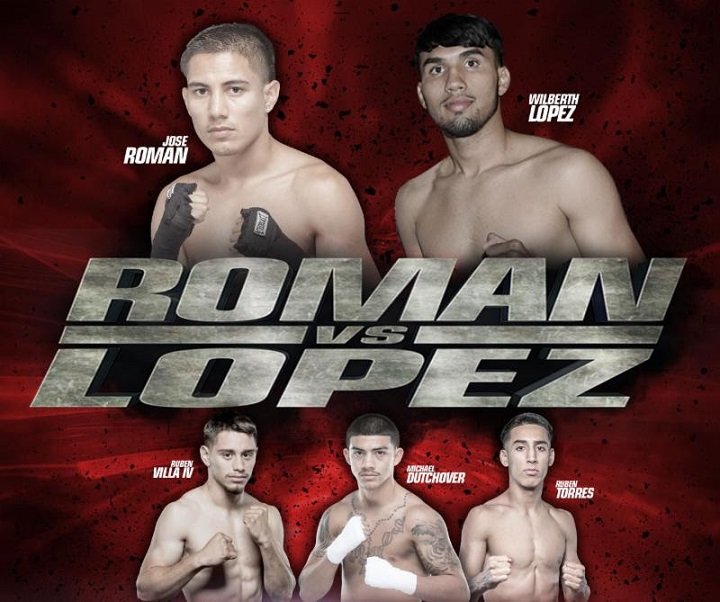 The five-bout show takes place on Friday, Sept. 22 from the Doubletree Hotel in Ontario, Calif.

Roman is among the most seasoned talents in the junior welterweight division. Having previously sparred against world championship stalwarts such as Ruslan Provodnikov and Tim Bradley, Roman enters his scrap against Lopez well equipped to extend his winning streak.

“I feel great going into next week’s fight,” Roman said. “I’m coming off a win in July and look forward to extending my winning streak against Lopez.”

Lopez, on the other hand, will aim to get back on the winning track after suffering a unanimous decision loss against unbeaten, world ranked challenger Alex Saucedo in May.

Ruiz made his Thompson Boxing debut last October and since then has knocked out his last two opponents.

“The plan is to start fast and end it early,” Ruiz said. “That’s what has worked recently and I don’t expect to change the plan.”

As far as the “New Blood” undercard, it is riddled with top-end prospects: featherweight Ruben Villa (7-0, 4 KOs), junior lightweight Michael Dutchover (5-0, 4 KOs), and lightweight Ruben Torres (1-0, 1 KO) all put their undefeated marks on the line.

Villa, 20, fights out of Salinas, Calif. and will face veteran Ernesto Guerrero (26-19, 18 KOs) of Mexico in a fight set for 6-rounds. Villa, a talented southpaw with impeccable amateur credentials, is entering the next phase of his development by getting matched against experienced competition.

“I welcome the challenge,” said Villa, who is co-promoted by Thompson Boxing and Banner Promotions. “As a young boxer, you need these types of experiences so you can measure your progress.”

Dutchover went the distance for the first time as a professional in his last fight against the once-beaten Miguel Carrizoza. Next Friday night, the Texas native, who has relocated to the Los Angeles area, plans to start a new knockout win streak.

“You never go searching for a knockout, but that is always the goal in any fight,” Dutchover said. “The less work and less punishment you endure, the better you are for it.”

Dutchover is signed with Thompson Boxing and Banner Promotions.

Rounding out the five-bout card is Torres, who made his professional debut on a Thompson Boxing card in August. The 19-year-old battles an opponent to be named later (4-rounds).

“New Blood” is presented by Thompson Boxing Promotions and sponsored by Lucas Oil, in association with Everlast.