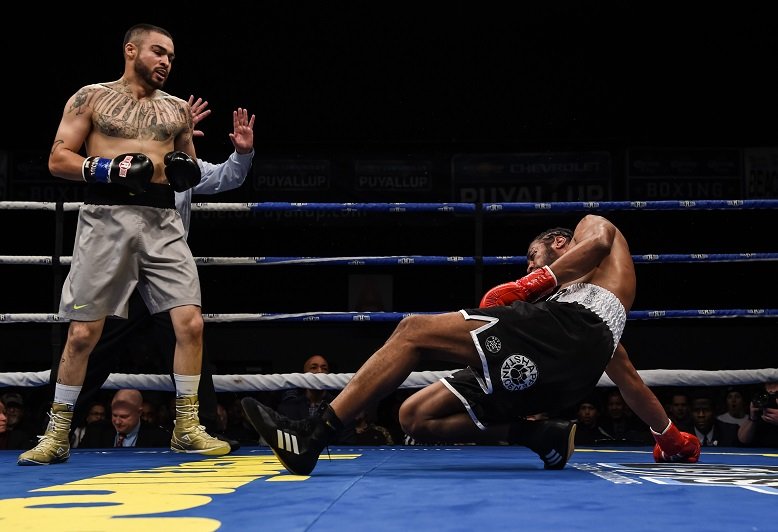 Williams, fighting for the second time following a lengthy hiatus, ended Andre Keys’ 11-fight winning streak with a 10-round unanimous decision in the main event of the Battle at the Boat 125 at the Emerald Queen Casino in Tacoma, Wash. on Saturday.

It was Williams’ second fight following a near 6 1/2-year layoff. He made his return last March, defeating Ronald Rivas. That marked his first fight since he lost to John Molina Jr in a bout for the NABO lightweight championship in January of 2013.

Key, who was fighting in front of his hometown, dropped to 12-2 with the loss.

Undefeated welterweight Jose Cervantes highlighted the undercard with a dominating win over Cody Brown (1-1). Cervantes improved to 2-0 with his second career knockout after putting away Brown via first round TKO (1:01).

Jose Cervantes had about as good a professional boxing debut as one could have.

Fighting on the undercard of Battle at the Boat 124 last November, Cervantes notched his first career victory by defeating a very-game Nikolas Vasquez by second-round knockout. He didn’t have much time to celebrate the win, however, as a little more than an hour later he was rushing to the hospital to be by his wife’s side as she delivered their third child.

“It was an amazing day. That morning I took her to the hospital, stayed with her hoping the baby would come out, but it didn’t,” Cervantes said. “I stayed until I had to leave for the fight. I got to the casino got ready for the fight, fought, won and smashed out to the hospital. As soon as I was entering the freeway, she sends me a picture that he was born. It was a baby boy we named Ezekiel. An amazing night, man. I won my first pro fight and my third baby was born.”

While that’s certainly a tough act to follow, Cervantes will look to remain undefeated when he faces Cody Brown on the undercard of Battle at the Boat 125 at the Emerald Queen Casino in Tacoma, Wash. on Friday, Jan. 17.

“I want to give my fans and the crowd an awesome fight,” said Cervantes, whose fans packed the Tacoma venue during his pro debut and remained standing and cheering from the moment he entered the ring until he left.

Cervantes’s fight against Brown will be one of six bouts on the card. Tacoma’s Andre Keys (11-1) faces former title contender Dannie Williams (23-3) in the 10-round main event.

Cervantes and Brown will square off in a four-round 144-pound bout. Both fighters bring 1-0 records into the contest.

“Jose’s debut last time out was incredible. I can’t remember an opening bout where the fans were that loud in 23 years of putting on Battle at the Boat,” said promoter Brian Halquist. “It was deafening. Jose and Cody are both exceptional fighters. This is one of the best undercard matchups we’ve had in a while.”

Cervantes’ debut was a long time in the making for the 28-year-old fighter.

“Winning my first professional fight was amazing. I felt accomplished. It’s something I’ve been wanting to do for several years now. For one reason or another wasn’t able to go pro, but we made it,” Cervantes said. “And winning by knock out on the second round, what a night.”

After controlling the fight in the opening round, Cervantes put away Vasquez 1 minute, 45 seconds into the second round.

“I can say I was nervous before my fight especially going in after my opponent, but once I heard the crowd cheering me on, man, that gave me nothing but energy. I felt so confidant,” Cervantes. “Until I stepped in the ring. I got nervous again.”

The win was 21 years in the making as according to Cervantes, he started boxing at the age of 7 in Guadalajara, Mexico because of his older brother.

“He would take care of me and my other brother since my mom had to work and since he boxed. Well, me and my brother would too,” said Cervantes, who was a Golden Gloves champion at 165 pounds in 2017. “I’ve been boxing ever since I was 7 years old, off and on.”

Cervantes will face Brown, who also picked up his first career victory by knock out on the Battle at the Boat 124 card.

Brown, who fights out of Chicago, defeated Dylan Blakesley by first-round KO.

“I didn’t get a chance to see him fight since I had to rush out the building,” Cervantes said about Brown. “But I prepare for every fight like if I’m going into war, like if I’m fighting for a championship belt. I never take it light. So, I’ll be more than prepared for whatever he brings.”

Battle at the Boat 125 will also feature a 145-pound semi-main event between Antonio Neal and Niko McFarland and a 170-pound fight between Juan Jackson and Joe Aguilar.