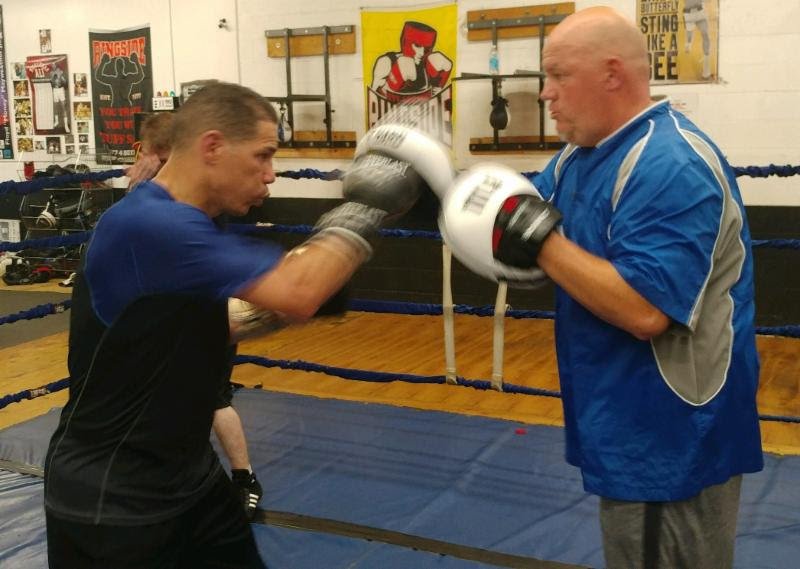 A dozen years after he captured his third world title in two different weight classes, seven since his last fight, “El Gallo” Jose Rivera returns to the ring August 17 to headline “Homecoming”, presented by Granite Chin Promotions (GCP) in association with Rivera Promotions Entertainment (RPE), at The Palladium in Worcester, Massachusetts.

The 45-year-old Rivera (41-6-1, 24 KOs) has already lost more than 30 pounds, now within four pounds of his contracted weight, since he started training earlier this year. He will headline against Ruben “Modern Day Warrior” Galvan (27-26-4, 10 KOs) in the eight-round main event.

In 1997, Rivera captured the International Boxing Organization (IBO) World welterweight title, stopping Gilberto Flores in the second round. Six years later, he traveled to Germany to take on undefeated, hometown favorite Michel Trabant (38-0) for the vacant World Boxing Association (WBA) World Welterweight Championship, in which Rivera won a 12-round decision and the belt.

In front of nearly 10,000 hometown fans in Worcester, Rivera capped his boxing career by winning a 12-round unanimous decision in 2006 over defending champion Alejandro Garcia (25-1) for the WBA World super welterweight title.

“The idea to return to the ring started with my son. A.J., and I talking about chasing history,” Rivera explained. “We are not able to put that together right now (A.J. was born with Spina Bifida and he was unable to secure medical clearance in time for the Aug. 17th show.), but because of my hard work these last six months, I felt that it was only fitting to continue with my fight.

“Granite Chin Promotions has been very instrumental to make sure that this show is put together in the most professional manner possible. I won’t think our promotional company (Jos and A.J. own and operate RPE Promotions Entertainment) would have been able to pull this off. All the negotiations had to be done and me training the only way I know how, at a championship level, would have been too much for us to handle.”

Granite Chin Promotions’ co-promoter Chuck Shearns added, “When Jose and I started talking about his ring return, I was the last person to think he was crazy. We were friends during his championship days and I know how incredibly committed and disciplined Jose is. I fought at 49 years old, not to compare myself to the level Jose has been on, but I know that it can be done. What everyone should know is how well Jose has taken care of himself during his thirties and into his forties. Did I ever think that Chris (Traietti, GCP co-promoter) and I would be co-promoting Jose’s comeback? No, but I’m happy to be involved and I will support him as far as he wants to take this. He’s been training like he’s 25 and Jose’s going to surprise some people.”

During Rivera’s title reigns, unlike other world champions, he also held a full-time job as a court officer in the Massachusetts Trial Court, a position in Worcester that he still holds 17 years later. Between working and training, never mind his family responsibilities, Jose somehow manages to balance everything in his extremely busy life.

“Let’s just say it makes for a busy schedule,” Rivera remarked. “I am committed to taking care of my family and will do whatever it takes. I usually run before work and train after work. Starting early and finishing late makes for busy days, but the job needs to get done. Right now, I’m in the middle of the hardest period of training. The week of the fight is more about preparing mentally and making weight. There’s nothing you can do the week of the fight to help you get into better shape.”

Rivera isn’t under any illusions that his comeback will lead to another major world title. The plan is for him to have two more fights to reach a total of 50 as a pro, but he’s taking things one fight at a time, and he still hopes his next fight, tentatively slated for later this year, will be on the same card as his son’s pro debut.

“I hear he comes to fight and that he likes to fool around a bit to try and get into his opponent’s head,” Rivera added. I’ve concentrated on me, my timing and focus on the game plan

“Training for this fight has been more mental than anything else. I have been able to reach peak performance at 45 training like I did in my prime. The most important thing is that, working with my trainer Sean Fitzgerald, I’ve been focused on making sure my timing gets better since it’s been seven years since I last fought.

“And, of course, it’s always a great feeling to box in front of my hometown fans. Their support is always appreciated.”

The name of the event is “Homecoming” because six fighters in action are from Worcester, including three who’ve never fought there before as professionals.

A portion of the proceeds will go to Spina Bifida Association of Greater New England.