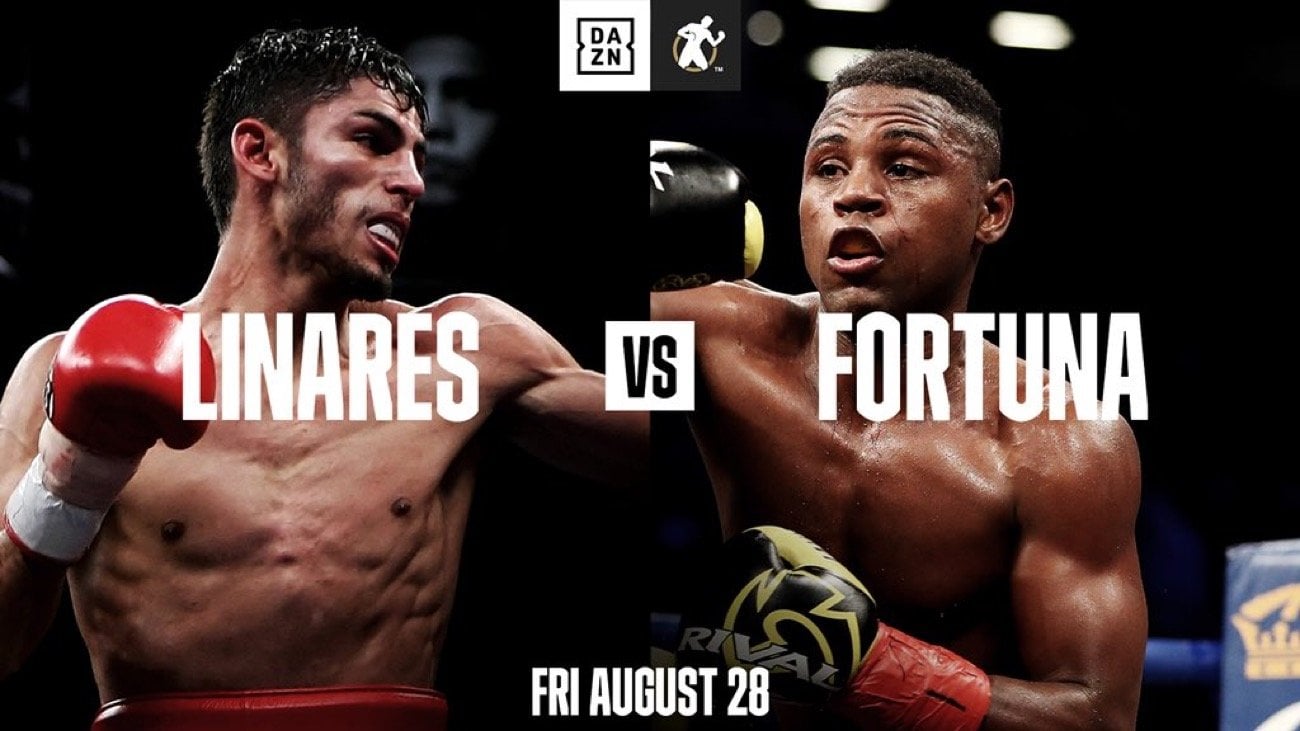 A high-stakes battle of international proportions heads to Fantasy Springs Resort Casino in Indio, Calif. as Jorge “El Niño de Oro” Linares (47-5, 29 KOs) takes on Javier “El Abejon” Fortuna (35-2-1, 24 KOs) in a 12-round fight for the WBC Diamond Lightweight Championship. The matches will take place on Friday, August 28, and will be streamed live on DAZN.

The event will be closed to the public and media. Details for the undercard will be announced shortly.

“Temperatures will reach record-breaking numbers this summer as we present a high-level clash between two battle-tested former world champions,” said Oscar De La Hoya, Chairman, and CEO of Golden Boy. “Linares’ legacy as a future Hall of Famer is etched in stone.

During his time with us, he has conquered three divisions and traveled all over the world as he demonstrated his courage as a fighter. But make no mistake: Linares is not done yet.

On August 28, he’s in for a tough fight against a man who is just as quick-handed as he is, so expect both men to bring a lot of firepowers. Golden Boy boxing is back, and that means competitive fights are back.”

Linares is a Venezuelan contender who boasts one of the most impressive resumes of any active fighter today. The quick-handed 34-year-old has earned world titles in the featherweight, super featherweight, and lightweight divisions and faced some of the best fighters in recent years. After a dominant performance against Carlos “The Solution” Morales in February, Linares is ready to regain his throne as the King of the Lightweights.

“I’m ready to return to the top of the lightweight division,” said Jorge Linares. “I have been training in Japan, a place that nourishes me and provides me with the best environment to train. At the same time, I’m also grateful to be headlining a card during this challenging time for the world. Still, I hope to provide everyone with a bit of diversion and excitement as I get closer to regaining my throne as the King of the 135-pound division.

Fortuna is a 31-year-old southpaw who is currently ranked No. 1 by the WBC in the lightweight division. The native of the Dominican Republic is a proven veteran who captured the interim WBA Featherweight Title against then-undefeated Patrick “The Punisher” Hyland in 2012, while in 2015, he defeated once-beaten Bryan “El Tiquito” Vazquez to capture the WBA Super Featherweight Title.

In his last shot at a world title, Fortuna lost a close split decision victory to Robert Easter Jr. In his previous outing, Fortuna dominated former world titles Jesus “El Jinete” Cuellar to earn his status in the division.

“Don’t make any excuses on fight night,” said Javier Fortuna. “Not the COVID. Not the travel. Nothing. Don’t blame it on an injury, either. Just fight. Come ready for war because that’s what I’m going to do. And when you lose, don’t make any excuse.”

“I commend Jorge Linares for taking this fight while so many other top contenders didn’t want the fight,” said Sampson Lewkowicz, President of Sampson Boxing. “I expect Javier Fortuna to be in top shape and ready for a battle he will win. Javier Fortuna will be the first three-time world champion from the Dominican Republic.”

For Rashidi “Speedy” Ellis (22-0, 14 KOs), it’s not if he’ll have a shot at a world title, but when. In the August 28 co-main event of Linares vs. Fortuna, Ellis will have an opportunity to show why when he faces experienced contender Brad “King” Solomon (28-3, 9 KOs) in a 10-round defense of his WBA Continental Americas Welterweight Title.

The event, which will take place at Fantasy Springs Resort Casino, will be closed to the public and media. It will be streamed live on DAZN.

“Rashidi Ellis is a big problem for everyone at 147 pounds,” said Oscar De La Hoya, Chairman and CEO of Golden Boy. “He may very well have the quickest hands in boxing, and he’s eager to fight the very best in the division. We’re proud to have him lead our explosive undercard for August 28, which features some of the best contenders in any division, including the hard-hitting Bektemir Melikuziev and rising welterweight Alexis Rocha.”

At 27 years of age, Ellis is ready for the very best that the welterweight division has to offer. The native of Lynn, Mass. has never tasted defeat since making his professional debut in 2017, and he’s fought in Mexico, Puerto Rico and the Dominican Republic as well is in many different cities in the United States. Ellis has previously held the IBF North American Welterweight Title, and now he is currently the proud holder of the WBA Continental Americas Welterweight Title, which he earned via unanimous decision in his rematch against Eddie “E-Boy” Gomez. Ellis will face one of the toughest challenges of his career in Solomon, and the result will indicate to all where he stands in the division.

“I’m finally back in the ring on August 28 on DAZN,” said Rashidi Ellis. “And I’m happy that it will be at my favorite place, Fantasy Springs Resort Casino. Brad Solomon his coming off some very tough challenges, but I’m coming to make a statement. I’m going to show that I’m the best in the welterweight division and that I’m ready for a title shot. Stay tuned!”

Solomon is a 36-year-old contender of Lafayette, Louisiana who was a decorated amateur before debuting as a professional in 2008. Aside from winning several Golden Gloves tournaments, Solomon also possesses an amateur win over Javier Molina. As a professional, he has defeated tough fighters such as Freddy “The Rail” Hernandez and Adrian “El Tigre” Granados. Solomon is returning after back-to-back losses against Vergil Ortiz Jr.and Alexis Rocha, but he promises that this fight will re-enter him into upper echelon of the welterweight rankings.

Marlen Esparza (7-1, 1 KOs) of Houston, Texas will return after her first and only defeat in an eight-round flyweight bout against Jacky Calvo (12-5-1, 1 KO) of Mexico City, Mexico.

Linares vs. Fortuna is a 12-round fight for the WBC Diamond Lightweight Championship presented by Golden Boy in association with Teiken Promotions and Sampson Boxing. The event is sponsored by Hennessy “Never Stop. Never Settle” and “BetOnline – Your Online Sportsbook Experts.” The event will take Friday, August 28 at Fantasy Springs Resort Casino and will be streamed live exclusively on DAZN.