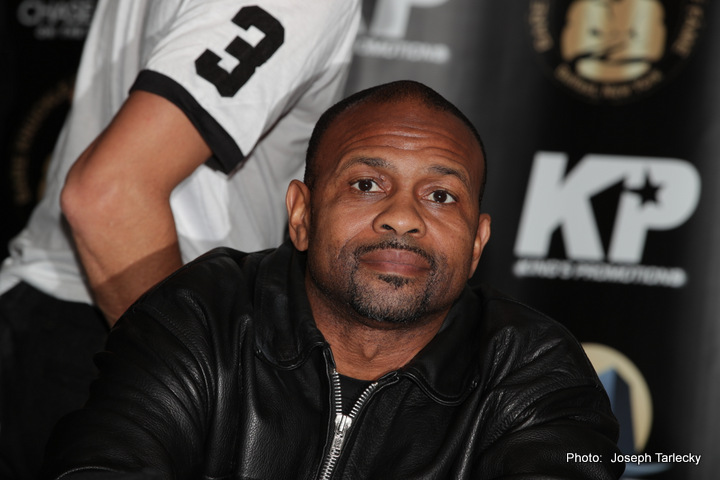 As former four-division world champion Roy Jones Jr. (64-9, 46 KO) prepares for his upcoming WBF World Cruiserweight Title fight against Bobby Gunn February 17, he has his eyes set on one thing, bringing the championship belt back to Pensacola.

This 12 round contest against former IBA title holder and current undefeated world heavyweight Bare Knuckle Boxing champion Gunn (21-6-1, 18 KO) is about more than Jones lacing up the gloves and continuing to do what he loves most; he is eager and adamant to add the World Cruiserweight hardware to his Hall-of-Fame resume.

“What fuels me and continues to motivate me to step back in to the ring is my love for boxing, and having the chance to win another world title,” said Jones.

Jones went 2-0 in 2016 against a boxer making his pro debut as well as an opponent who hadn’t won since 2002, and he knows that the man standing across from him in 6 weeks is hungry and on a mission to put him on his back.

“Bobby is a heavy hitter who is going to come at me and look for the knockout,” said Jones. “I am training for this fight like I did for my first championship fight. He’s a former world champion too and bare knuckle boxing champion so he knows how to win, so I know I have to train and do what I’ve done in the past to get the W.”

Gunn captured the IBA world title in 2006 and has thrown hands with a handful of world champions, and despite gloved boxing inactivity since 2013, has continued to make his presence known on an international level through bare knuckle boxing. In 2011 he fought in the first sanctioned BKB bout since 1889 and finished Richard Stewart, claiming the world title. Since he has stayed busy going to battle with top bare knuckle fighters around the world, keeping his unblemished record of 72-0 intact. He has had his eyes set on this showdown with Jones for quite some time and is confident February 17 will be his time to shine and get his hand raised against the future Hall-of-Famer.

Following a less than spectacular year of boxing in 2016, Jones Jr vs. Gunn has the makings of a super fight that can get boxing fans around the world once again excited for the sweet science. There’s been no trash talk to build and sell the hype as is the case with other fight sports; this is simply a matchup of two former world champions who have much respect for one another and are focused on going out and proving they are the better man February 17.

Tickets for this WBF World Cruiserweight Title fight can be purchased at https://www.eventbrite.com/e/world-championship-boxing-roy-jones-jr-vs-bobby-gunn-tickets-30126456041.

On February 17 in Wilmington, Delaware, as Bobby Gunn and Roy Jones Jr. will throw hands to determine the WBF Cruiserweight Championship of the World, Pastor Joe Mitchell from Light and Life Ministries in the UK will be making fight sports history of his own as he been invited to come over and perform a prayer service at the weigh ins and before the world title fight. As often is the case where a clergyman provides prayer prior to a fight, what sets this apart is that Pastor Joe will be performing the prayer for the World Championship bout.

Bobby Gunn was born and raised a Gypsy traveler, Gunn is a former World Cruiserweight title holder and the current world bare-knuckle heavyweight champion bare knuckle boxing is a rich history within the Gypsy community looked up to by hundreds of thousands of travelers worldwide, and having someone of the magnitude of Pastor Joe perform the service before his fight is quite humbling to Gunn.

“Pastor Joe Mitchell is known worldwide amongst the travelers as an incredible man of God, and he has devoted his life to the word of God and blessing the lives of others,” said Gunn. “Words cannot express how much it means to me that he will be by myside before, during and after the fight. The greatest fight that could ever be won is bending your knees.”

Gunn and Jones Jr. are both men of faith, and have acknowledged the meaning of having such a powerful man lending his time to give blessings to each man before he engages in battle.

“This truly sets the precedence for what an incredible night it is going to be,” said Gunn.

“The greatest fight that ever was won is bending your knees to Jesus,” Paston Joe added.

From day one boxing fans around the world felt a vibe that Bobby Gunn vs. Roy Jones Jr. was going to be a night to remember, and truly set the stage for boxing in 2017. Both fighters have expressed their ongoing appreciation in having Pastor Joe with them on such an epic night. Bobby Gunn vs. Roy Jones Jr. will take place at the Chase Center in Wilmington Delaware on February 17, and will be televised worldwide.