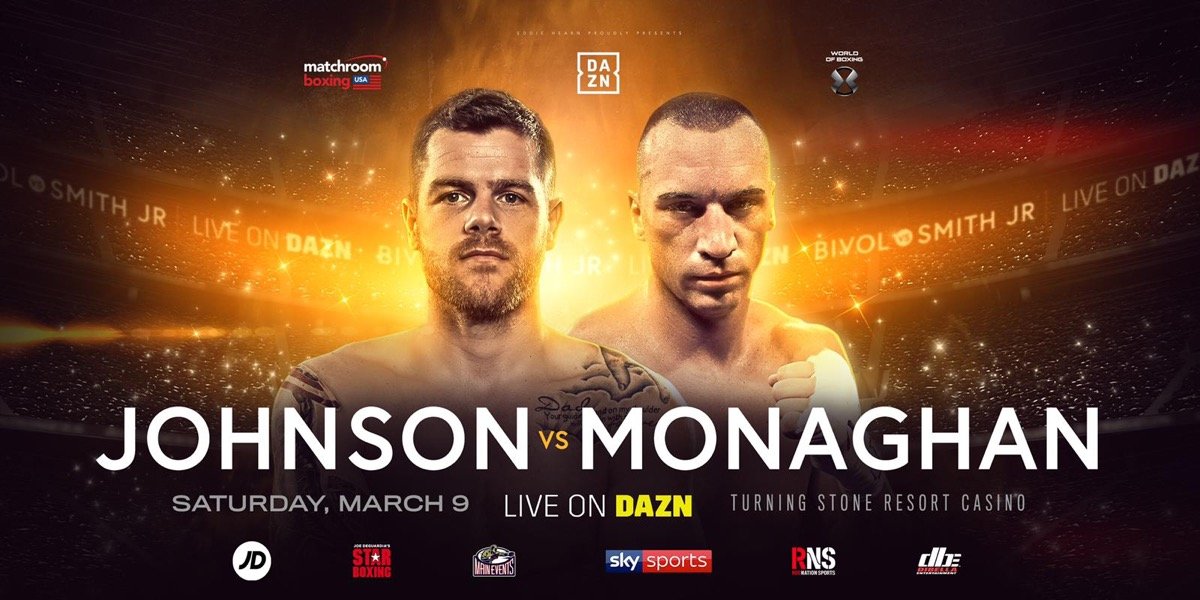 Callum Johnson and Sean Monaghan will clash in a crunch Light-Heavyweight battle at the Turning Stone Resort Casino in Verona, New York on Saturday March 9, live on DAZN in the US and on Sky Sports in the UK.

Johnson (17-1 12KOs) returns to the States following his first World title fight in October in Chicago against Artur Beterbiev, a wild shoot-out with the Russian champion where he hit the deck in the opening round, but returned the favor with interest in the second round before being stopped in the fourth.

The 33 year old former British and Commonwealth champion and Commonwealth Games gold medal man is straight back into a major showdown for the 175lbs division as he targets a second crack at the big prize in 2019, with the fight notably bolstering the stacked bill for WBA ruler Dmitry Bivol’s defense against Joe Smith Jr.

“I was gutted in the Beterbiev fight, I was gutted because I felt the occasion maybe got to me, but I still had good moments in the fight and I’ve learned a lot from it,” said Johnson.

“I know that if a second shot comes my way, I will be more than ready for it with the experience of Chicago behind me. Sean always puts everything into his fights and he badly needs this win, just like I do, so there should be fireworks.”

Irish-American Monaghan (29-2 17KOs) is in no doubt as to what is on the line in what he’s calling a ‘do or die’ fight for his career.

The New Yorker enters the bout gone the ten round distance with Sullivan Barerra in November, and the 37 year old sees a victory over Johnson as a must-win to keep his World title dreams alive.

“I’ve had my eye on Callum since before the Beterbiev fight,” said Monaghan. “He has a come forward pressure style and our styles should make for a fan friendly fight.

“I know these Brit’s always come in shape so I’m already working very hard. This is a fight I absolutely need to win. No excuses, it’s do or die for me.”

Johnson and Monaghan clash on a huge bill in upstate New York led by a World title double-header in the shape of Bivol’s clash with Smith Jr and Maurice Hooker puts his WBO Junior-Welterweight title against unbeaten challenger Mikkel LesPierre, with more undercard action to be announced.