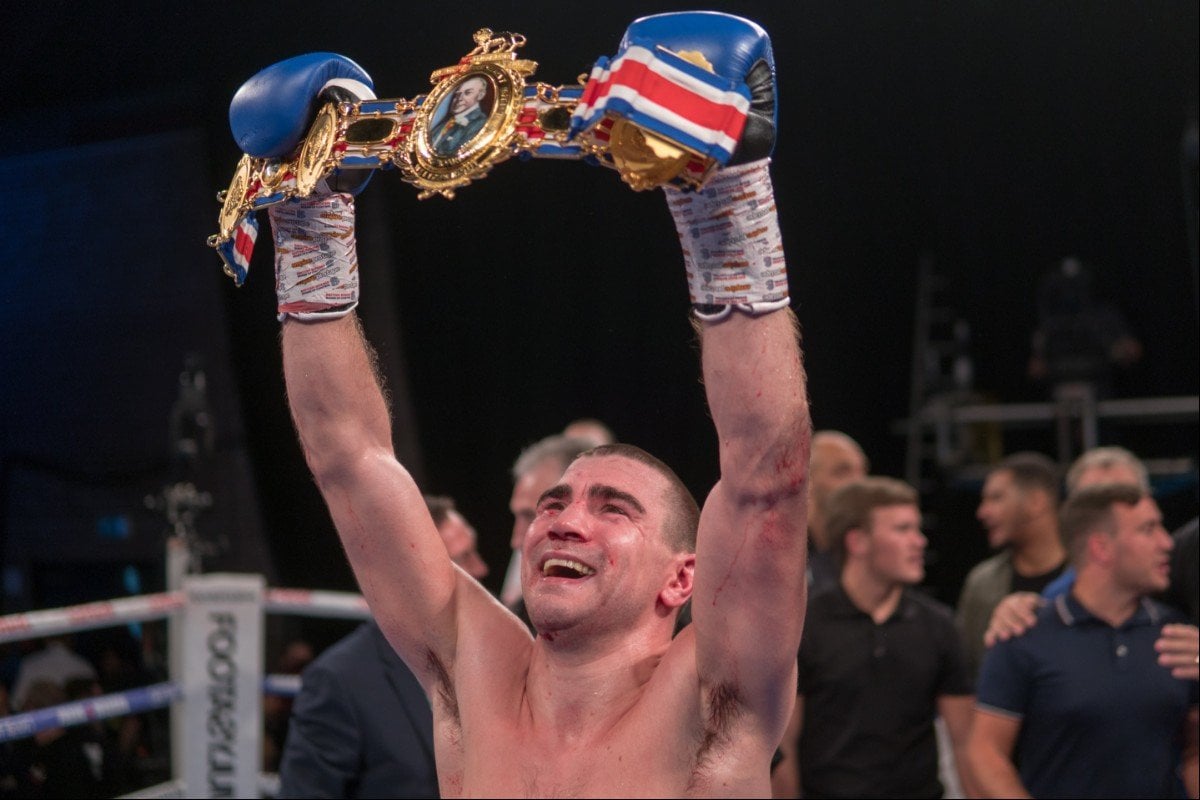 Johnny Garton described winning the British title as a ‘dream come true’ whilst sitting on the edge of the ring apron on Saturday evening, the Lord Lonsdale challenge belt wrapped around his shoulder and a massive smile upon his bruised and bloodied face.

The dream was made reality after coming out the victor in an all-out war on Saturday night against a former world title challenger in Gary Corcoran for the vacant British welterweight title.

A nasty gash on the top of Garton’s forehead continuously flooded his face with blood throughout the contest, but it didn’t affect his performance the slightest, stunningly halting Corcoran in the eleventh round.

“It hasn’t sunk in at all!” said the man known as ‘The Pexican’, still in shock of his achievement.

“I can’t explain it, it’s an unbelievable feeling. My phone hasn’t stopped with people telling me congratulations, it’s been mad!”

An achievement on this scale usually requires a celebration afterwards, but despite finding himself up ‘the boozer’ later in the evening, it wasn’t necking pints and shots in Johnny’s plans.

“I saw everyone who came out to support me after the fight at a pub over in Bermondsey, I don’t drink, it was more just to say thank you to everyone… that’s the craziest it has got to be honest!

“I haven’t celebrated really. I went out with the family Sunday for something to eat and that is pretty much it.”

After winning the championship, the obvious next hurdle to jump is to win the Lord Lonsdale championship belt outright by defending the prestigious title three times.

The right to showcase the belt on his mantelpiece indefinitely might well be the plan, but the 31-year-old won’t have any hesitation aborting this mission if a lucrative offer arises.

“I’ve got to think about my family” admitted Garton.

“As it stands, I will be looking at winning the title outright, but if other opportunities come up with more money on the table, my family comes first and that is the direction I will head in.”

The quizzing has already begun regarding Johnny’s next opponent with the likes of amateur stand-out Josh Kelly being mentioned. The welterweight division on the domestic scene is full of fighters ready and waiting to fight for the belt.

“Before I won the title, I’d been chasing fights my whole career, but now I’ve got the belt it’s going to make things a lot easier to get these fights. I’m easy, I just leave it to my team and they’ll sort out who I’m fighting next.”