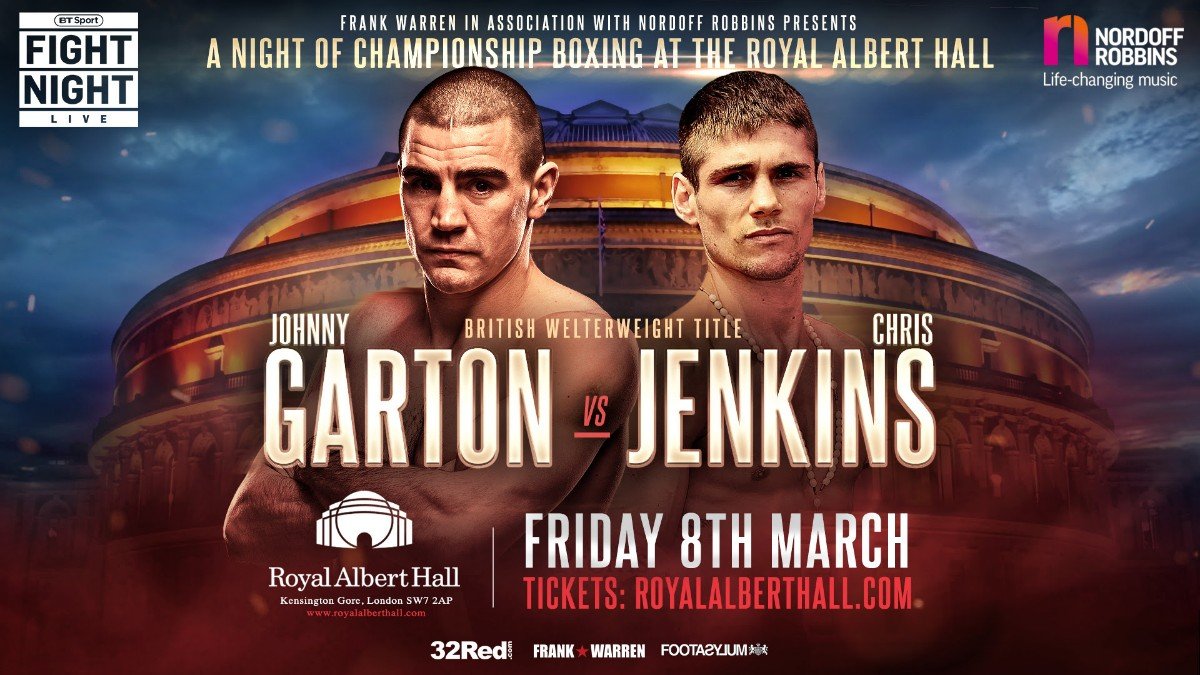 Jenkins drew and lost a close points decision against Tyrone Nurse in super-lightweight title contests back in 2015.

“I just hope that this is my time in a British title fight,” said Jenkins who warmed up for his big fight by outpointing Edvinas Puplauskas in early February.

Jenkins, 30, added: “There are so many fighters, who get so close yet so far.

“I don’t want to be known as the ‘almost man’ or the unluckiest Welsh boxer because of cuts and close decisions going against me.

“The cuts are in the back of my mind, but I have to try and put it away and just box to the instructions my trainer Gary Lockett gives me.

“We will see what happens on the night, but I am confident in my own ability and if I box to instructions from Gary I can beat anybody.

“Hopefully there will be no cuts and I will do what I have to do to become British champion.”

Garton (23-1-1) has been one of the biggest surprises in British boxing in recent years and admits he never expected to get this far.

Jenkins is one of the few who spotted Garton’s potential when they sparred for five rounds.

Chris explained: “A few years ago I went to Johnny’s gym when Liam Williams was sparring with Bradley Skeete and we did a few rounds together.

“It was a good even spar and a nice move around for both of us.

“I thought Gary Corcoran was a tough fight for Johnny because he gave Liam Williams a hard fight, but everything he did was good and he drew Gary into the fight he wanted.

“I am not surprised to see Johnny do well. He trains very hard, is a good fighter, Alan Smith is a good trainer and he trains in a champions gym. Success breeds success.”

BRITISH WELTERWEIGHT CHAMPION Johnny Garton reflected that his professional career did not get off to the most auspicious beginnings, partly because his own trainer wasn’t hugely enthused over the prospect of working with him.

Garton did indeed end up learning the pro ropes at the iBox Gym in Bromley under the tutelage of Alan Smith, who is known in the business as a specialist in harnessing the talents of more defensively-minded, stylish counter punchers.

The now 31-year-old Garton wasn’t the ideal horse for the course at Smith’s stable of thoroughbreds because, by his own admission, his amateur skillset was limited at best.

“I believe I had 30-35 fights and lost about ten, maybe a few more,” revealed the fighter known as The Pexican, dubbed as such due to his all-action style and hailing from Peckham.

“I wasn’t the greatest and I was even worse as an amateur – even more of a slugger!

“I used to just have a tear-up for three rounds and knew on turning pro that I needed to change.

“I remember speaking to Al and he wasn’t overly keen because he knew I got hit too much. But I knew Al was the right coach, so I kept chipping away and kept coming back and annoying him.

“Here we are now,” pointed out Garton, who makes a first defence of his title at the Royal Albert Hall on March 8 against Chris Jenkins.

“I broke the mould at this gym! But I am bringing titles back and that is the main thing,” he added, before conceding that he never imagined making a living from boxing when his primary aim was selling enough tickets to even step into the ring.

“Never, no. Most of my career, up to about two years ago, was all ticket deals where if you don’t sell tickets you don’t fight and earning little money.

“I haven’t really earned much money from the sport and that is why I am chasing the purses now.

“It was massively disheartening back then but I love the sport of boxing and I always had my job to fall back on. At times when you saw people doing well with big pay days it was a bit of a kick in the teeth.”

A turning point for Garton came in December 2017 when he added the IBF European title to the Southern Area and English belts he had previously won after a bruising encounter with Mihail Orlov at the Copper Box.

“I’d just got signed by Frank (Warren) then and it was such a good fight that they showed it back on BoxNation. From there I think people started taking an interest in me.”

Now the Garton story moves on to probably the grandest venue of all in South Kensington on Friday March 8, live on BT Sport.

“It is a breath-taking venue and, to me, it doesn’t seem like a boxing venue because it is too nice. I can’t wait to get out there and for my supporters to see it.”

Also at the Royal Albert Hall, Nicola Adams OBE will look to make history and be the first female crowned World Champion at the venue as she challenges for the WBO World Flyweight Title against Arely Mucino on International Women’s Day.