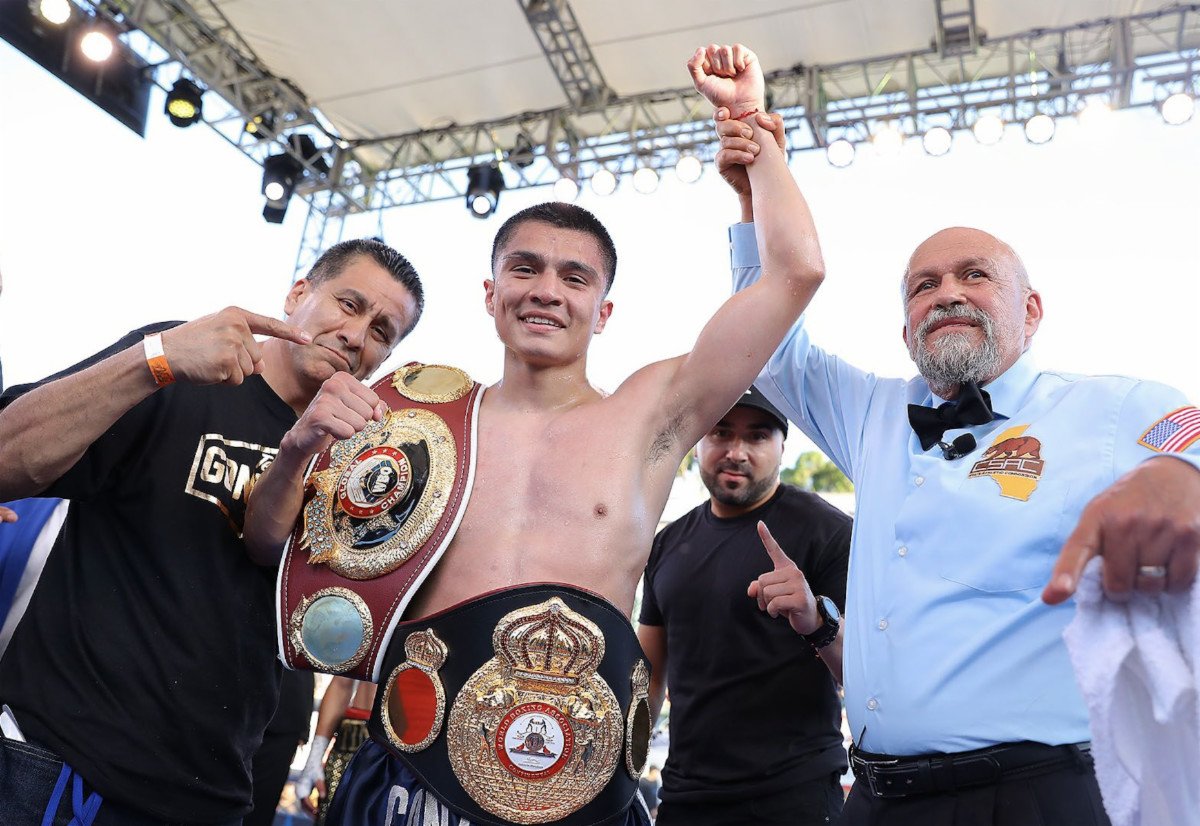 Ahead of his first world title opportunity, Joet Gonzalez (23-0, 14 KOs) has re-signed with Golden Boy as he begins to conquer the featherweight division.

“Joet Gonzalez is one of the most talented and toughest fighters to come out of Southern California in recent years,” said Oscar De La Hoya, Chairman and CEO of Golden Boy. “When we first signed him, he was an undefeated prospect who showed lots of promise, especially because of his amateur background. During the past years he has become the best featherweight contender in the world, and I’m proud to continue promoting him as enters the next level of his career. Joet Gonzalez will become champion on October 26, and I’m confident he will conquer the division.”

Gonzalez is an undefeated contender of Glendora, California who possess an impressive amateur resume. After several fights as a professional, the 25-year-old pugilist made his Golden Boy debut in April 2015 when he stopped Ali Gonzalez on an LA FIGHT CLUB card, where many young talents from the company developed into today’s contenders.

Gonzalez then climbed the featherweight rankings by defeating fighters such as Deivi Julio Bassa, Rafael “Big Bang” Rivera, and Manuel “Tino” Avila. Now, Gonzalez will take on Shakur Stevenson (12-0, 7 KOs) of Newark, New Jersey for the vacant WBO Featherweight World Title in a bout promoted by Top Rank, in association with Golden Boy, Let’s Get It On Promotions and Atlantis Casino Resort Spa. The fight will be streamed live on ESPN+.

Luis Nery vs. Brandon Figueroa on May 15th on Showtime

Gonzalez pleased to be fighting for world title

“The relationship between a boxer, a manager and a promoter is a partnership,” said Joet Gonzalez. “I built and developed my career with Golden Boy, and now that I am fighting for a world title, I want to show everyone that we are in this together as I take the next step in my career. I want to thank my manager, Frank Espinoza, along with everyone at Golden Boy. This October 26 I will bring a world title back home.”

LOS ANGELES, CA (September 25, 2019) – Undefeated super lightweight prospect, Justin “The Stallion” Cardona (3-0, 2 KOs), who hails from Salinas, CA, will be making his Staples Center debut this Saturday, September 28, 2019, on the Errol Spence vs. Shawn Porter card. Cardona is excited about fighting on the big stage as he gives his thoughts on his upcoming four-round bout against Archie Weah (3-13, 1 KO).

“It’s always been a dream of mine to fight at the Staples Center in Los Angeles” said Cardona, who is trained by Ruben Guerrero Sr., father of multiple division world champion, Robert “The Ghost” Guerrero. “As a kid growing up, I remember all the big fights that happened there with guys like Sugar Shane Mosley and Oscar De La Hoya. For this to be a reality now is unbelievable. I’m very grateful for this opportunity and I’m going to give the fans a very memorable performance.”

In preparation for this fight, Cardona spent camp with Robert Guerrero in Las Vegas, getting world class sparring with some of the best fighters in boxing. Cardona feels he’s more prepared going into this fight then any other in his career.

“Training in Las Vegas was a new, but exciting experience for me,” Cardona continued. “I learned a lot about how to take care of my body and what it takes to get to the championship level. This training camp was no joke. The sparring I got was incredible and the high-altitude training was grueling. The Guerrero family has been a tremendous blessing to my career, and everyone will see me at my best come fight night.”

“Justin works very hard in the gym and he’s learning what it takes to be a good pro in boxing,” said Ruben Guerrero, who’s been training Cardona since he turned pro. “This was his first camp in Las Vegas and he now knows what it takes to become a world champion. I see a bright future for this kid and he has all the tools to go to the top”