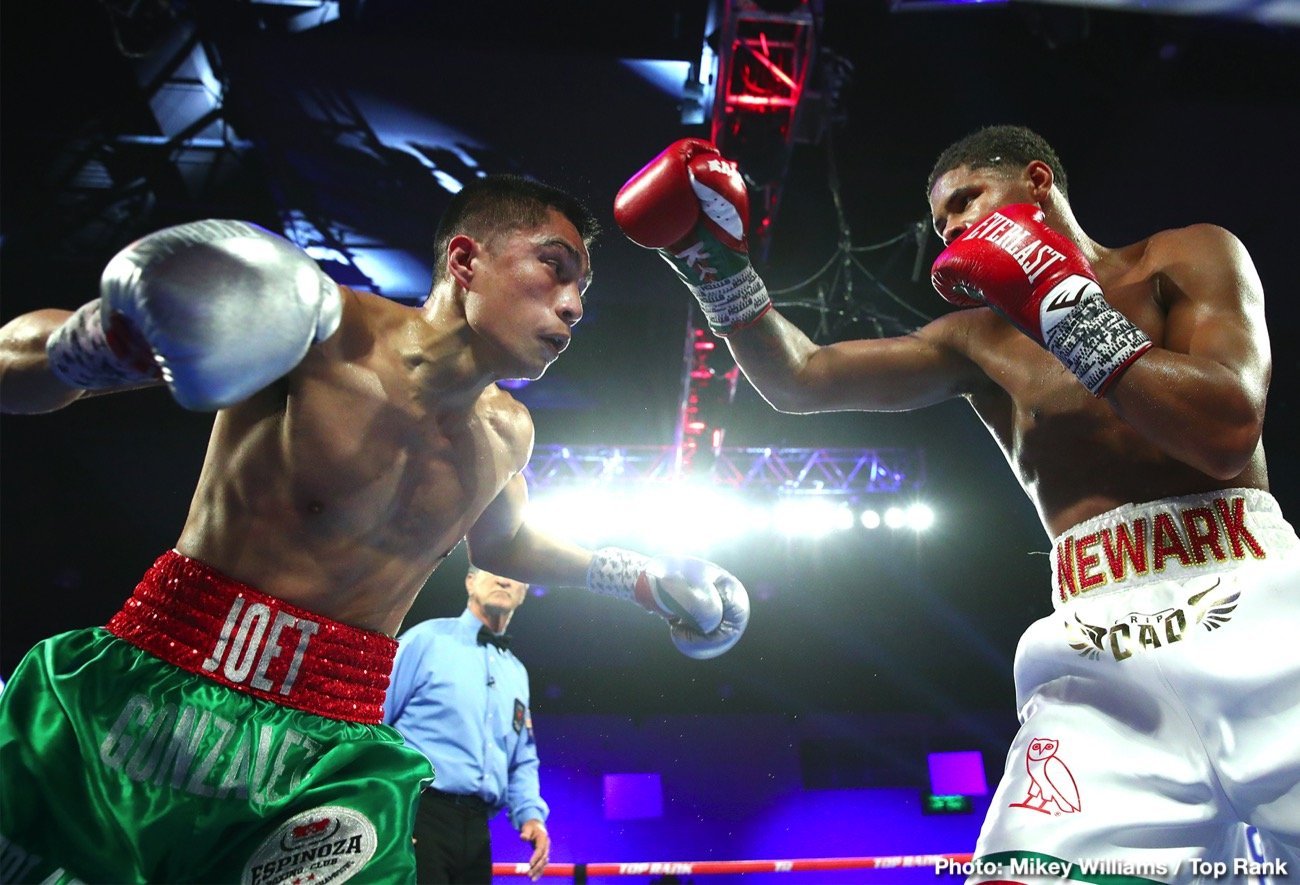 Three homegrown Golden Boy fighters will make their ring returns after challenging for a world title on the March 19 edition of Golden Boy and DAZN’s Thursday Night Nights at Avalon Hollywood. The event will be streamed live on DAZN, RingTV.com and on Facebook Watch via the Golden Boy Fight Night Page beginning at 10:00 p.m. ET/7:00 p.m. PT.

In the main event, Joet Gonzalez (23-1, 14 KOs) of Glendora, Calif, will take on Chris Avalos (27-7, 20 KOs) of Lancaster, Calif. in a 10-round featherweight fight. Gonzalez will return after challenging for the WBO Featherweight World Championship in October 2019.

Joet Gonzalez looking to bounce back from loss

“I can’t wait to step back into the ring,” said Joet Gonzalez. “I fought for a world title, so I know what it’s like to be at that level. Now, I’ll be coming back with an even stronger desire to become a world champion. I want to thank my manager, Frank Espinoza, and my promoter, Golden Boy, for the opportunity. This March 19, I will not disappoint.”

In the co-main event, Lamont Roach Jr. (19-1-1, 7 KOs) of Washington, D.C. will fight against Filipino warrior Neil John Tabanao (17-7, 11 KOs) in a 10-round super featherweight fight. Roach Jr. will come back after challenging for the WBO Junior Lightweight World Title in November 2019.

“I’ve been itching to get back in that square to show that I’m the best at 130,” said Lamont Roach Jr. “My last fight was just a glimpse, but this year it’s all the way up with me.”

“I’m looking forward to this fight against Lamont Roach Jr.,” said Niel John Tabanao. “I know that he’s coming off his first loss and that he wants to fight for a world title again. However, I more experience than he, and I know how to score an upset. We’ll see you all on March 19.”

Marlen Esparza (7-1, 1 KO) of Houston, Texas will participate in a six-round super flyweight clash against Lucia Nuñez (7-10) of Mexico City, Mexico. Esparza will return after fighting for the WBA Interim Flyweight Title in November 2019.

“I’m ready to get back in the ring,” said Marlen Esparza. “There were multiple factors that made this last fight a real learning experience, but this next round of professional boxing is just the beginning of much more. I’m looking forward to coming out with the new strategies that I’ve been learning and switching up my game a bit.”

“I’m coming to score the upset,” said Lucia Nuñez. “I know that Marlen Esparza is strong and that she has a lot of experience. But I also have those same qualities, and I’ll be coming with an even stronger will to win. We will see you all on March 19.”

The undercard of his event will be stacked with some of Golden Boy’s most promising rising stars.

Gonzalez vs. Avalos is a 10-round featherweight fight presented by Golden Boy. The fights will take place Thursday, March 19 at Avalon Hollywood. The event will be streamed live on DAZN, RingTV.com and on Facebook Watch via the Golden Boy Fight Night Page beginning at 10:00 p.m. ET/7:00 p.m. PT. The series will also be available on Pluto TV’s FIGHT Channel and regional sports networks around the nation. To see when and where the series is available in your area click here.

Tickets for Gonzalez vs. Avalos go on sale on Monday, Feb. 3 at 10:00 a.m. PT and are priced at $30, $40, $50, and $80, not including applicable service charges and taxes. Tickets will be available for purchase at www.goldenboytickets.com and the Golden Boy Facebook page.