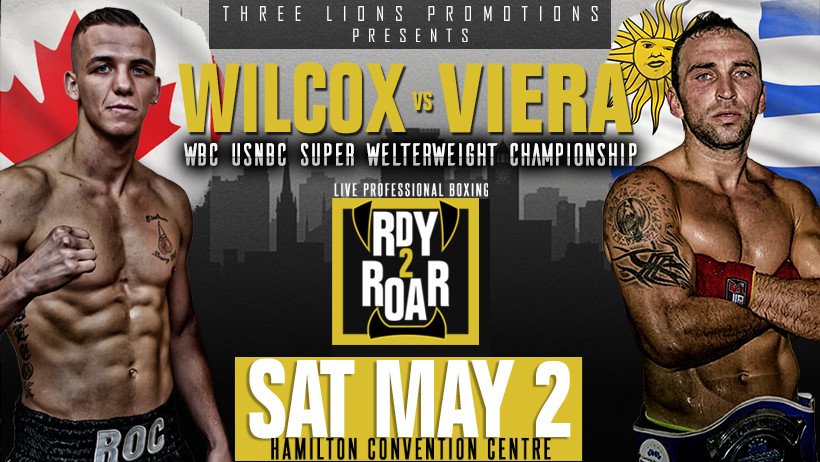 On Saturday, May 2, Three Lions Promotions (TLP) presents Hamilton’s own Jessie “Roc” Wilcox (15-0-2, 9KOs) in a ten round clash for the WBC USNBC Super Welterweight Championship against Andres “Pitufo” Viera (10-2-0, 8KOs) of Mercedes, Uruguay, at the Hamilton Convention Centre. “It’s always great when it’s an international contest like this,” explained TLP Managing Director Daniel Otter. “Both guys want to perform well for their respective countries. The winner will improve their standing in the WBC rankings, moving one step closer to the world champs.”

Viera is looking to even the score for Uruguay here in Canada. The last Uruguayan to fight in the great white north was super middleweight contender Noe Gonzalez (31-5-0, 23KOs), who lost a WBC Silver Championship tilt with Adonis “Superman” Stevenson (29-2-1, 24KOs) back in 2012. A tricky fighter, known for erratically switching from orthodox to southpaw, Viera is the reigning Uruguayan national champion, boasting wins over previously undefeated Nicolas Barrales (10-2-0, 9KOs) and sturdy lefty Fernando Cleffi (9-4-0, 3KOs).

“I am looking forward to coming to Canada to take on Jessie for the WBC title,” said Viera.
“Jessie has come up a weight class.I have been boxing at 154 my whole career. I feel that evens up the playing field, being that I’m fighting him in his home town. I am confident that belt is coming home to Uruguay with me.”

Wilcox is understandably keen to impress Hamilton and the world in first major title bout. “I really want to put a show on for my local friends and family,” said Roc. “Viera will bring the best out of me. I’m there to win, bottom line.”

Wilcox has been looking ever sharper as a professional boxer, using his amateur pedigree to outbox his last several opponents. In his first fight of 2020, the Hamiltonian earned his most important win to date, pounding out a unanimous decision over the durable Luis Enrique Montelongo (12-8-0, 3KOs) of Mexico in front of a packed Centre 200 in Sydney, Nova Scotia.