Unified WBC, WBA, and IBF World Champion Jermell Charlo and WBO World Champion Brian Castaño will battle for undisputed status at super welterweight as all four 154-pound belts hang in the balance for the first time in history on Saturday, July 17 live on SHOWTIME from AT&T Center in San Antonio in a Premier Boxing Champions event.

Tickets for the live event, which is promoted by Lions Only Promotions and TGB Promotions, are on sale now and can be purchased through www.attcenter.com. Romero vs. Dulay is co-promoted with Mayweather Promotions.

“This is going to be a monumental and historic event on July 17 at AT&T Center in San Antonio,” said Tom Brown, President of TGB Promotions. “Charlo and Castaño will be vying to become the first undisputed champion at 154-pounds in the four-belt era.

This is a big moment for the sport and I’m expecting both fighters to do whatever it takes to accomplish something that’s never been done before. Whoever emerges victorious on July 17, will cement their legacy and become the undisputed top fighter in one of the most stacked divisions in all of boxing.” 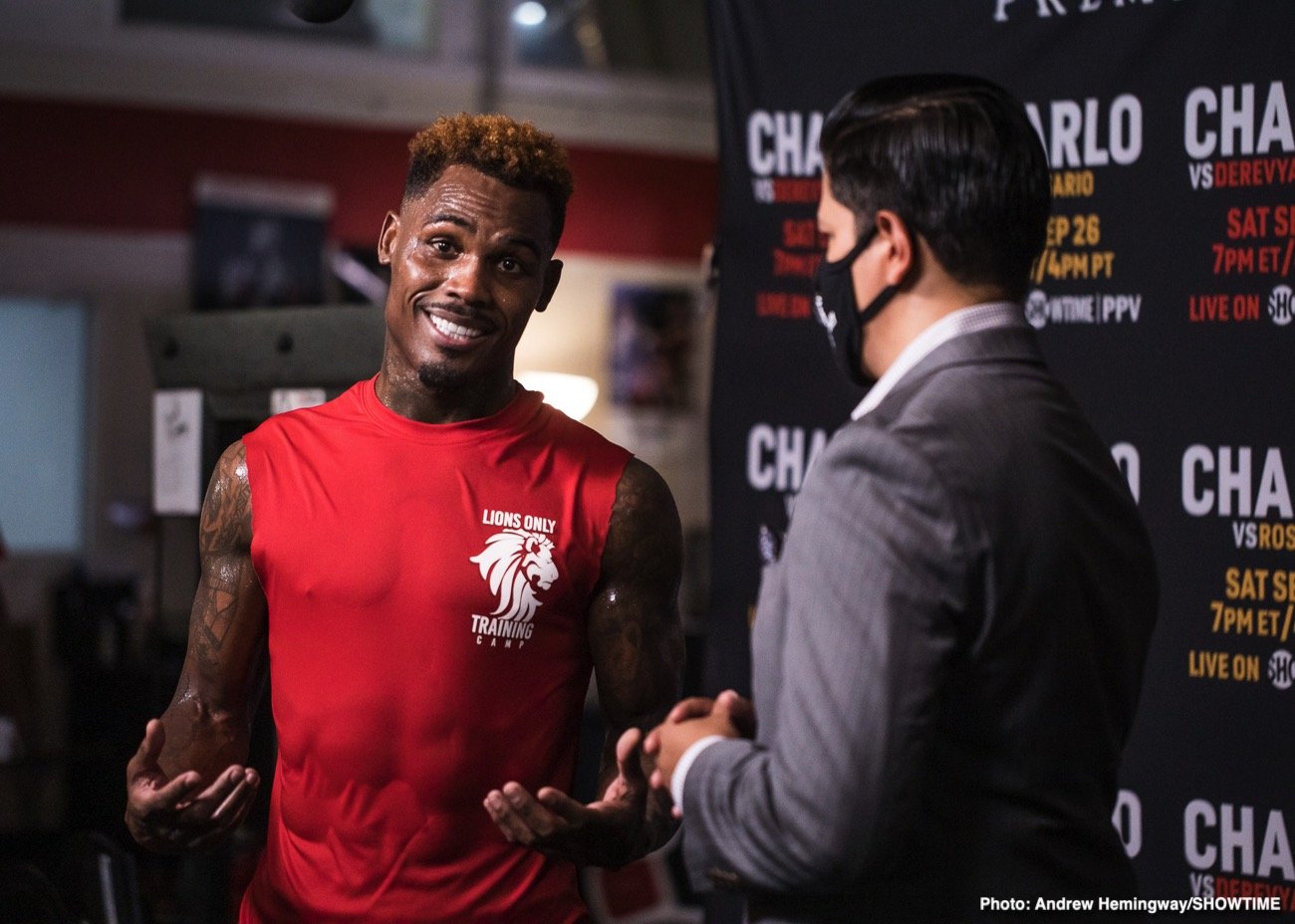 After years of scintillating matchups, memorable showdowns, and drama-filled bouts, the super welterweight division will crown an undisputed champion on July 17 when the unified champion Charlo puts his three titles on the line against the hard-charging world champion Castaño. The winner of this matchup will become the first four-belt champion of the 154-pound division.

Houston’s Charlo (34-1, 18 KOs) became a unified champion in his last fight, dropping Jeison Rosario three times on his way to an eighth-round knockout that earned him the WBA and IBF titles.

Before that fight, Charlo had avenged the only loss of his career, as he reclaimed his WBC belt via an 11th-round knockout of Tony Harrison in one of 2019’s best fights.

The 31-year-old is trained by Derrick James in Dallas and won his first world title in his debut fight with James by scoring an eighth-round knockout of John Jackson in 2016. He followed up that victory with three successful defenses, knocking out Erickson Lubin and Charles Hatley, while winning a decision over former world champion Austin Trout.

“I’m more than excited for July 17,” said Charlo. “I have so much potential and I’m just doing everything I can to get better and do better day by day.

I’m hungrier than ever because I know I’m on the verge of capturing this undisputed title and doing something that nobody has ever done before at 154 pounds.

There’s nobody out there that’s as fast, strong and elusive as me. Castaño doesn’t possess anything I haven’t seen before, and we’ll see if he can take my power and the pain I’ll bring.

But there’s nothing that worries me about this fight. I’m training super hard and aggressive and just taking it one day at a time. I’m so ready for this and more than likely he’ll walk into every shot I throw.” 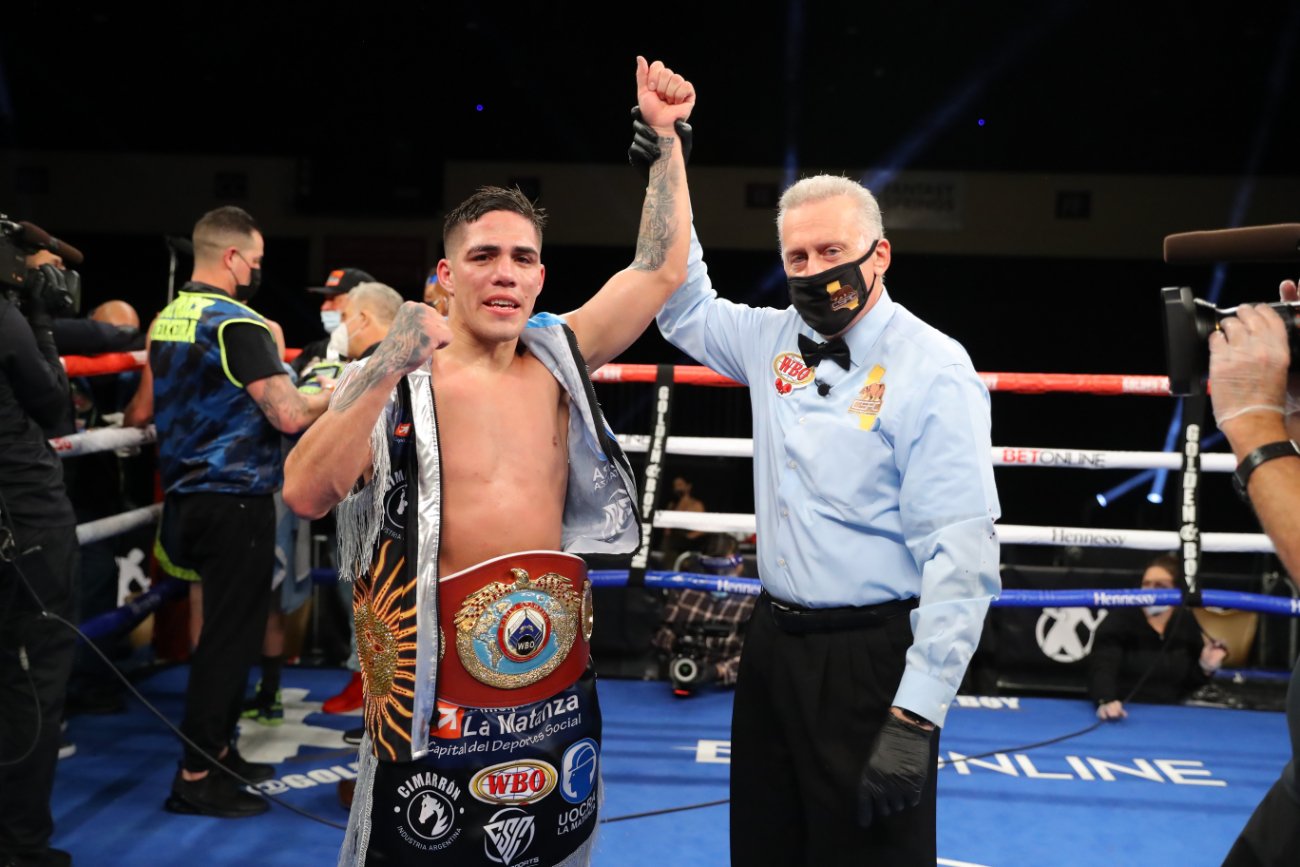 The 31-year-old Castaño (17-0-1, 12 KOs) put on a spectacular performance to capture the WBO title in February, as he dominated Patrick Teixeira to wrest the belt away via unanimous decision.

A native of Buenos Aires, Argentina, a win on July 17 would be a monumental achievement in the storied history of Argentine boxing.

Prior to winning his title, Castaño fought to a draw against two-division world champion Erislandy Lara in a 2019 action fight, and also owns triumphs over Michel Soro, Cedric Vitu, and Wale Omotoso.

“This is the biggest opportunity of my life and I won’t let it get away,” said Castaño. “I’ll make Charlo suffer more than he ever thought was possible. I’m training with only one goal in mind, to leave the ring with all of the belts on July 17.”

A rising prospect in the Mayweather Promotions’ stable, Romero (13-0, 11 KOs) won his interim title in August 2020 via unanimous decision over then unbeaten Jackson Marinez.

The 25-year-old followed that victory up with an impressive seventh-round TKO over Avery Sparrow in January. Representing his hometown of Las Vegas, the undefeated Romero began his pro career with knockouts in 10 of his first 11 fights.

“I’ve watched some clips of Dulay fighting, and he definitely isn’t going to want to get hit by my power,” said Romero. “My trainer Bullit Cromwell and my dad are always by my side in camp, so we haven’t been working on doing too many things differently, we’re just fine-tuning.

People said that all I have is power, so in my last fight I carried Sparrow the entire fight so I could show a different side. But for this fight, I don’t think I’m going to need to do that.”

Dulay (14-2, 10 KOs) enters this fight the winner of three out of his last four bouts, as he seeks a career-best triumph over Romero on July 17.

The 25-year-old most recently defeated Jose Gallegos by unanimous decision in November 2020, putting him back in the win column after a decision loss against former title challenger Diego Magdaleno.

Fighting out of his hometown of Nashville, Tennessee, Dulay’s only other pro loss came against unbeaten rising interim super featherweight champion Chris Colbert.

“I moved my whole camp to Atlanta to focus mentally and to prepare physically for this fight,” said Dulay. “I’m bringing everything I got for this opportunity. But honestly, my training began over 20 years for this. It’s my time!”

The 25-year-old made his U.S. debut with a stoppage of Zach Prieto in November 2019, then returned quickly to knock out Leopoldo Reyna in January 2020. Most recently, the undefeated middleweight stopped Edward Ortiz in the second round of their November 2020 clash.

“Training has been going great for July 17,” said Vidal. “This is the best camp of my life. I will be stronger and hit harder than ever before, which is not good news for Immanuwel Aleem. The fans should watch this fight because I have a spectacular knockout to show them.

My opponent has excellent experience and is a very good fighter, but I have full confidence in my punching power and my ability to beat him.

This is another great opportunity for me. I grew up dreaming of doing exactly this in the ring, fighting in America against great opponents who will test me. This is a chance to be one step closer to reaching my goal of becoming a world champion from Uruguay and I will make the most of it.”

The 27-year-old Aleem (18-2-2, 11 KO) has been sparring with WBC Middleweight World Champion Jermall Charlo as he prepares to make his return to the ring.

Born in East Meadow, New York, and now residing in Richmond, Virginia, Aleem will look to bounce back from a draw against Matt Korobov and a majority decision loss against Ronald Ellis in his last two fights.

Unbeaten in his first 18 pro bouts, Aleem owns an impressive stoppage victory over then unbeaten Ievgen Khytrov in their memorable 2017 brawl.

“I’m excited to take advantage of this opportunity on July 17,” said Aleem. “Vidal has an undefeated record, so I know he’s going to come in with confidence, which should make this a great fight.

I can’t wait to show off everything I’ve been working on. You’re going to see the very best version of myself in this fight and I’m going to do whatever it takes to have my hand raised.”