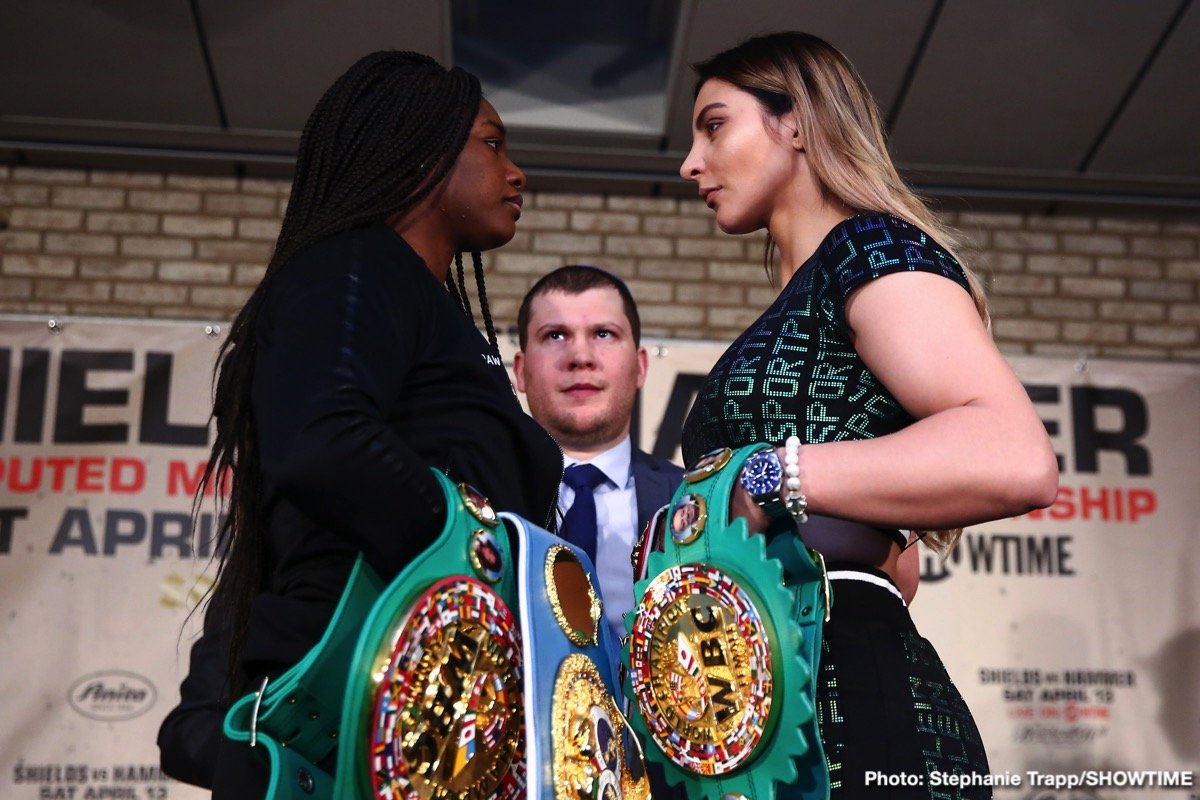 Two undefeated heavyweight prospects will put their unblemished records on the line when they fight in separate bouts on Saturday, April 13 live on SHOWTIME from Boardwalk Hall in Atlantic City, N.J on the undercard of the Claressa Shields-Christina Hammer groundbreaking event. Top American heavyweight prospect Jermaine Franklin will take on former No. 1-ranked U.S. amateur Rydell Booker in the 10-round co-featured bout while undefeated Swedish heavyweight Otto Wallin will battle highly decorated amateur Nick Kisner in a 10-round clash that will open the SHOWTIME BOXING: SPECIAL EDITION tripleheader at 9 p.m. ET/PT.

In the main event, undefeated middleweight world champions Shields and Hammer will meet to crown the women’s undisputed 160-pound world champion in what is arguably the most significant women’s boxing event in history.

Tickets for the live event, which is promoted by Salita Promotions, are priced at $150, $100, $55 and $35 and are on sale now. Tickets can be purchased through Ticketmaster and at boardwalkhall.com.

“The heavyweight division is as talented and exciting as ever, and we are thrilled to add two undefeated warriors to the April 13 telecast,” said promoter Dmitriy Salita. “We have the best American heavyweight prospect in Jermaine Franklin and one of the best European heavyweight contenders in Otto Wallin. These fights will be tremendous lead-ins to the historic Shields vs. Hammer main event and will create a night to remember for boxing fans worldwide.”

The 25-year-old Franklin (17-0, 13 KOs), from Saginaw, Mich., is a former amateur standout and a 2014 National Golden Gloves Champion. A likely candidate to represent the U.S. at the 2016 Olympic Games, Franklin turned down the opportunity to compete for a spot on the team and instead chose to begin his professional career in 2015. Widely regarded as the top American heavyweight prospect, Franklin has built his undefeated record with relative ease since turning pro, knocking out nine of his first 10 professional opponents. Coming off a lopsided 10-round decision over Craig Lewis in July, Franklin aims to continue moving up the ranks of the resurgent heavyweight division in 2019 and position himself for a title shot.

“I can’t wait – I am ready to show that I am the new man in the heavyweight division,” said Franklin. “Rydell is a good fighter but he is in the way of my goal of winning the heavyweight world title. April 13 will be my coming out party and I am very honored to have this opportunity on SHOWTIME.”

Booker (25-1, 12 KOs), from Detroit, Mich., is a former No.1-ranked U.S. amateur who was once a rising heavyweight prospect with a 22-0 record. He suffered his lone defeat to former three-division world champion James Toney, who was coming off wins over Vassiliy Jirov and Evander Holyfield, in 2004. After serving a 12-year prison sentence, Booker has returned to the ring looking to get his life back on track and live up to his once promising expectations, registering three unanimous decision victories in 2018 under the tutelage of former world champion Jimmy Paul.

“It means a lot to have this opportunity to fight on SHOWTIME,” said the 38-year-old Booker, who sparred with heavyweight world champion Anthony Joshua in preparation for his September 2018 bout with Alexander Povetkin. “I’m ready to show my talents on a national stage so everyone will know who Rydell Booker is once again. I think Jermaine Franklin is a pretty good fighter but he has never fought anybody with my experience, knowledge in the ring or my ring savvy. I am going to teach him some new lessons on April 13. I have a bag full of goodies and tricks at my disposal that I will teach this young whipper snapper.”

Wallin (20-0, 13 KOs), who will be making his U.S. debut, turned pro in 2013 and has gradually risen in the rankings by recording 20 consecutive wins. The 28-year-old southpaw, who originally played ice hockey and soccer in his native Sweden before finding the sweet science, won the Swedish Boxing Championship at 16-years-old, fought against Joshua twice as an amateur and was a member of the Swedish National Boxing Team. Currently ranked No. 5 by both the WBA and IBF, Wallin most recently won a 12-round unanimous decision over Adrian Granat in April 2018 and now has his sights set on becoming his country’s first Heavyweight Champion since Ingemar Johansson in 1960.

“I’m very excited about making my U.S. debut on SHOWTIME,” said Wallin, who has spent the last two years conducting training camp in New York with his trainer and former two-division champion Joey Gamache. “To be fighting on such a big card is very inspiring. I’ve been dreaming of this moment since I first started boxing at the age of 15. I will put on a good performance on April 13 and introduce myself to the American fans. I will be one step closer towards my goal of winning the heavyweight world title. Like I’ve said before, I’m a kid from a small town in Sweden and I’m proud of where I’m from and what I’ve achieved so far, but I feel like this is when all the fun starts.”

The 28-year-old Kisner (21-4-1, 6 KOs) has competed at both cruiserweight and heavyweight since turning professional in 2010 after a successful amateur career. Among Kisner’s numerous amateur recognitions, the Baltimore, Md. native was a three-time National Silver Gloves Champion, two-time Junior National Golden Gloves Champion and Ringside World Champion. He holds the distinction of being the youngest boxer in American history ever to win a Men’s National Title in the heavyweight division at 17 years old. As a pro, three of Kisner’s four losses have come against opponents who boasted an undefeated record on fight night. In his last bout, Kisner defended his WBA U.S. cruiserweight title with a majority decision win over Scott Sigmon.

“I’ve dreamt my whole life of one day fighting on national television and now that the time is here, I’m going to make the most of it,” said Kisner. “Wallin is very good but I’m going to prove I’m one of the best heavyweights on the planet. I have proven my ability to beat the best in the world at both the amateur and professional level and I will do it again on April 13.”