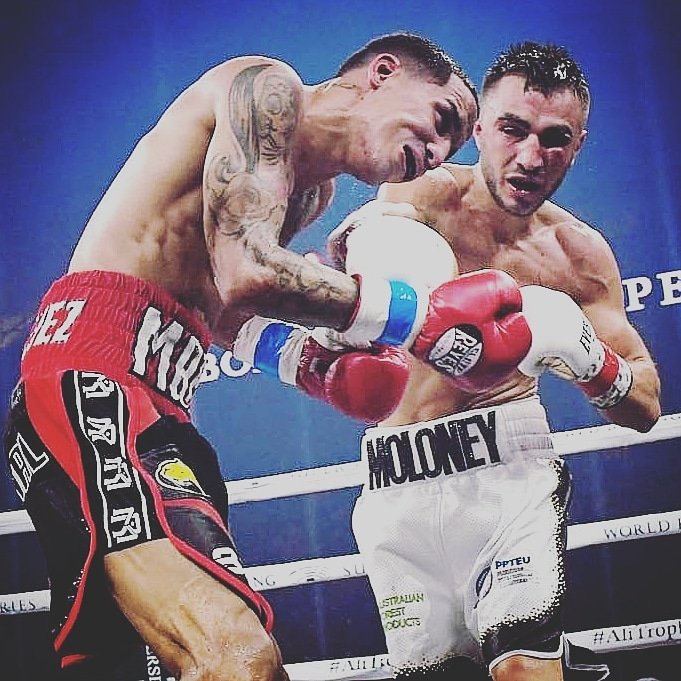 Jason Moloney continued to prove that he is one of the hottest talents in the Bantamweight division, as he destructively dismantled the tough Cris Paulino in 5 rounds last Saturday evening in Tweets Head, Australia.

This was the first time that Paulino had been stopped in this fashion down at Bantamweight, with Vic Darchinyan stopping him at Super Bantamweight. Moloney gave an assessment on his performance which saw him regain his WBA Oceania Bantamweight title.

The Smooth One said, “I felt I boxed well on Saturday night and I was delighted to be back in the ring. I’ve not really stopped training after the Rodriguez fight and that controversial loss has made me a better fighter and I felt that I showed I am a world level fighter in my performance last Saturday evening.

“I have been working on things in the gym with Angelo and I was able to pull those off in the fight and I showed I have multiple dimensions to my game, and that’s what you need at the top level.”

Moloney now has his sights set on another world title fight and is ranked highly in all of the governing bodies. The Melbourne native opened up about what he wants now after defeating the game Cris Paulino, “I want another crack at the world title. I have a great team who I believe can make that happen but that is what I want. I feel I beat Rodriguez and most people believed I did so now I want to go out and prove I am the best Bantamweight in the world and I am ready to fight anyone for a world title.”

Moloney’s manager Tony Tolj, who has just been named WBA Oceania manager of the year, added, “Jason did exactly what we expected him to do on Saturday night. He is a class act and he has shown he is a top draw world level fighter.

“For me, the next step is definitely world titles, and my plan is to ensure Jason and brother Andrew are both world champions before the year is out.”

World rated Bantamweight Jason Moloney is winding down as he prepares for his first outing since his controversial loss to Emmanuel Rodriguez in the World Boxing Super Series last year.

Moloney, whose career is guided by Australian boxing supremo Tony Tolj, is going straight back in at the deep end, as he faces former Vic Darchinyan opponent Cris Paulino at the Seagulls Rugby Club, Tweets Head this coming Saturday night in a WBA Oceania title contest.

Moloney discussed how preparations and gone ahead of the Paulino showdown, and what effect Brother Andrew fighting has had on his camp.

The one-time world title challenger said, “Camp has gone great, it was really a continuation of training for me as I was right back in the fight after the Rodriguez fight.

“Andrew winning in the dramatic style that he did in Chile was amazing and if anything is pushing me on. We have top fighters in our gym such as Billel Dib who is in a good fight on Saturday night, so I’ve maintained my focus prior to the fight and I’m looking forward to putting on a career-best performance at the Seagulls Rugby Club.”

The Melbourne native said, “Myself and many others felt I won the fight against Rodriguez but I have nothing but good things to say about the WBSS. I really enjoyed my time and experience in the WBSS. I am disappointed it’s not me going to unify the division in my next fight, but my time will come.

“I’d love to fight Rodriguez again after the World Boxing Super Series ends, whether that be for a world title or not, I would love to avenge that defeat.”

Moloney continued, “The dream is to be world champion, and the dream for our family would be for Andrew and me to be world champions in 2019. I think that would be massive for Australia but I am fully focused on Saturday night as I need to win and win well against Cris Paulino to make sure that I stay on the right path towards that goal of being world champion.”