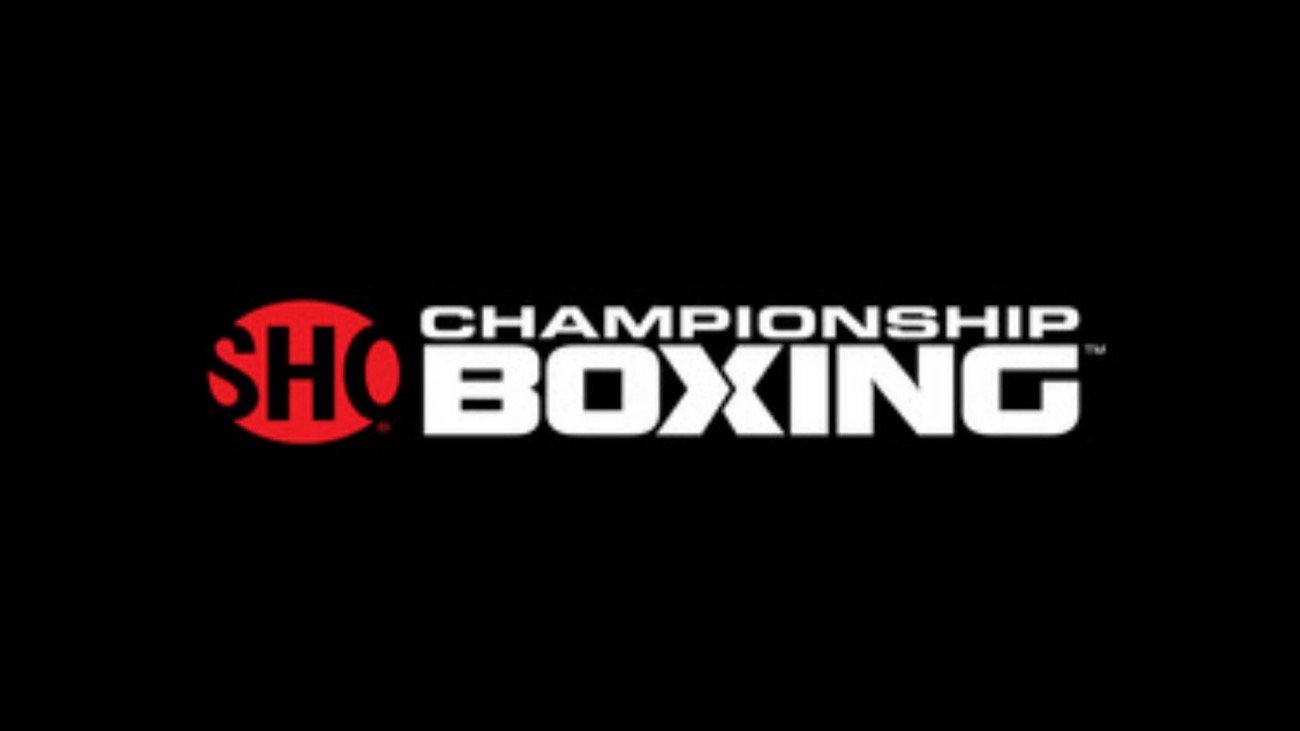 Detroit’s Figueroa Bocachica (16-0, 11 KOs) is following up on his dominating performance in his ShoBox debut in October when he faces the power-punching Reyes (14-0, 12 KOs) from Tampa, Fla., in a 10-round welterweight bout. The co-main event will feature unbeaten Russian and Detroit-trained Vladimir Shishkin (11-0, 7 KOs) taking on Ghana’s Sena Agbeko (23-1, 18 KOs) in a 10-round super middleweight matchup. In addition, Alejandro Guerrero (12-0, 9 KOs) of Irving, Texas, returns to ShoBox and faces Mexico’s Abraham Montoya (19-2-1, 14 KOs) in an eight-round lightweight bout. Another Russian-based in Detroit, Mich., Timur Kerefov (9-0, 4 KOs), will battle middleweight prospect Argenis Espana (15-1, 14 KOs) of Venezuela in the eight-round telecast opener.

The four-fight telecast is promoted by Salita Promotions.

“I am delighted to promote an exciting night of boxing, featuring some of the best young talent in boxing in opposing corners,” Salita said. “The February 17 card features possibly the best new talent in four different weight divisions in pick ‘em fights. Middleweight Timur Kerefov, fighting with trainer SugarHill Steward in his corner, is looking to quickly climb up the ladder. Super featherweight Alejandro Guerrero is fighting his toughest test against Abraham Montoya. Super middleweight Vladimir Shishkin is looking for a breakout performance against the hungry Sena Agbeko, who is looking to make a name for himself. This show may also be the crowning of one of the best new welterweights in the world with an exciting matchup between undefeated prospects, Janelson Figueroa Bocachica and Mark Reyes, Jr.”

Steward, who legally changed his name to SugarHill Steward to honor his late uncle Hall of Fame trainer Emanuel Steward, calls Kerefov, “One of the best middleweights in the world right now,” and that there is no limit to how far the 30-year-old can go. “We don’t have long conversations because of the language barrier, but I’m impressed how Timur is able to process the information I tell him, and quickly get better in the short time we’ve worked together,” said Steward, who is also training Anthony Dirrell at Big Time Boxing and Fitness in Boca Raton, Fla. “The Russians who come to Detroit are here to work and not run the streets, which I like. They have families and know that boxing in the United States is the mecca. So, they take it very seriously.”

Bocachica returns for his second consecutive ShoBox appearance as the 22-year-old Detroit native overpowered Puerto Rico’s Nicklaus Flaz from the start earning a first-round TKO at 2:43 of round one in October. Bocachica is a four-year pro who began boxing at age eight. He won four consecutive Ringside Championships (2011-14), the National PAL Championships and the 2015 Detroit Golden Gloves. He boasts an amateur record of 55-5. He is trained by his father, Nelson Figueroa.

“After the last appearance on ShoBox, I felt like that was the performance that I needed,” Bochachia said. “I picked Mark Reyes out myself because I wanted better competition and he is 14-0. I want to put a statement out to all of the fighters in the 147-pound division. A win gets me closer to my dreams. I am fighting better opposition. It shows that Janelson is the truth, and I am coming for everyone in the welterweight division. I am not worrying about anything.”

Reyes is coming off of a first-round knockout of Diego Perez on November 21, in his hometown of Tampa. Reyes was a successful amateur winning the PAL National Tournament in 2012, as well as the Junior Olympics and Ringside Tournament. He also won two National tournaments competing for Puerto Rico: the 2015 Frankie Larvae National Championships and 2016 Cheo Aponte National Championships. Overall, he accumulated a record of 45-5 before turning pro in March 2016. He is now trained by Raul “Chino” Rivas, who also coaches former world champion Tevin Farmer.

“I am excited to be in this position, fighting on ShoBox, where a win will put my name on the boxing map,” Reyes said. “Bocachica is a solid fighter, but I look forward to adding the first loss to his record and showing the viewers why I took this fight on short notice. Training camp has been going great and I will be ready.”

Shishkin has previously fought twice on ShoBox earning impressive wins over Ulises Sierra and DeAndre Ware. Steward worked Shishkin’s corner for the Sierra fight, but Steward’s commitment to heavyweight champion Tyson Fury has not allowed the two to train exclusively together. Shishkin has recently been working with L.J. Harrison. In his last fight on August 20, he recorded a ninth-round technical knockout of Oscar Riojas. Shishkin is currently ranked No. 9 by the WBC, No. 11 by the WBA and No. 12 by the IBF in the 168-pound division.

“I’m grateful, once again, to get the chance to showcase my skills on SHOWTIME,” said Shishkin, 29. “I’m preparing in a new gym called Superbad with a new coach. I’m curious how that will affect me in the bout. I know this fight puts me just one step closer to my goal of becoming a world champion.”

Born and raised in Accra, Ghana, Agbeko was a member of the Ghanaian National Team as a youth and had 69 amateur bouts. Agbeko turned pro in 2011 at the age of 19 and had his first 15 bouts in Ghana before relocating to the United States in 2013 to pursue his dream of becoming a world champion. Agbeko has fine-tuned his craft serving as a sparring partner for Caleb Plant, Badou Jack and Brandon Adams. Agbeko currently lives in Nashville, Tenn., with his wife.

“Training is going great and we’ve been training for a while already, so we’re just doubling down on a few things and fine-tuning as well for the fight,” Agbeko said. “I know my opponent has an extensive amateur background and a style that’s reflective of where he’s from in Russia. I expect an aggressive, yet well-calculated fighter. I will win this fight because I know I want it more and, as a result, have put more effort into preparation. My superior boxing skills coupled with desire and effort will get it done.”

Fighting out of Houston, Texas, Guerrero is a big-punching prospect who won a closely contested slugfest via majority decision over Jose Angulo in the last ShoBox telecast before the COVID-19 pandemic shut down the sports world for several months in March 2020. Prior to that win, Guerrero had stopped three consecutive opponents including a second-round TKO of Darnell Jiles, Jr. in January 2020. A celebrated amateur who won two junior national titles, the 22-year-old “Pork Chop” has sparred with the likes of world champions Mikey Garcia and Brandon Rios at the famed Garcia Boxing Academy in California.

“I know nothing about my opponent, but I’ve watched one clip of him and that’s all I needed to see to know he will go down,” Guerrero said. “This fight will mean a lot to me because it will show the world I’m the real deal. I will win this fight for my career and my family.”

The 26-year-old Montoya, of Baja California, Mexico, will be making his United States debut on February 17 and will be fighting outside of his native Mexico for just the second time. After dropping his second professional contest, Montoya rallied to go unbeaten in his next 18 bouts before traveling to Russia in November 2019 to take on undefeated prospect Muhammadkhuja Yaqubov, where he lost a 12-round decision. Montoya rebounded to score a second-round TKO over Reyes David Lopez his last time out in October, and also owns an impressive victory over then-undefeated prospect Luis Alberto Lopez Vargas.

“Fighting in the U.S. and on SHOWTIME has always been my dream and I can’t wait for February 17 to show what I can do,” Montoya said. “I’ve never worked or trained as hard for a fight as I have for this one. I’ve seen my opponent and know he will bring the action just like his last fight. He will be tough, but I’m as ready for this as I’ve ever been.”

Hailing from Shaluska, Russia, and now fighting out of Detroit, Mich., Kerefov will make his ShoBox debut on February 17. Kerefov, 30, amassed an impressive 298-12 amateur record in his home country during his nearly decade-long reign at the elite level of international amateur boxing. In 2019, Kerefov turned in five impressive victories in Russia prior to his United States debut at the famed Kronk Gym in Detroit in August 2020, where he turned in a dominating unanimous decision victory over Calvin Metcalf in a middleweight bout.

“I am in the middle of a great training camp with trainer SugarHill Steward in Florida,” Kerefov said. “I look forward to showing the boxing fans that I am the new face of the middleweight division.”

The 31-year-old southpaw, Espana, will be fighting for the first time in the United States as 14 of his 16 professional bouts have taken place in Venezuela. The power-punching Espana’s only career loss was to Dervin Colina in 2019 and 14 of his 15 victories have come via knockout. In December, he TKO’d Leonard Carrillo in his last fight.

“This is a great opportunity for me to appear in the U.S.,” Espana said. “I know very little about my opponent, but that does not bother me at all. I am always training and ready to go the distance or less. Victory will get me closer to a world title.”