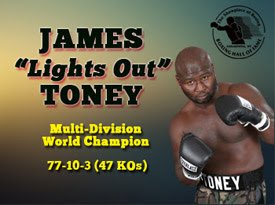 “James Toney was an ‘old school’ fighter who provided boxing fans with so many exciting moments during his championship career,” said Hall of Fame director Edward Brophy. “Toney is a real fan favorite and we are looking forward to welcoming him to Canastota for the 2018 Hall of Fame Weekend events.”

Born in Grand Rapids, MI, Toney turned pro in 1988. He won world titles in multiple weight divisions and holds wins over such notables as Michael Nunn, Iran Barkley, Vassiliy Jirov, Merqui Sosa, “Prince” Charles Williams, Fres Oquendo and Hall of Famers Mike McCallum and Evander Holyfield. “Lights Out” owns a 77-10-3 (47 KOs) professional record and, in 1991 and 2003, was named “Fighter of the Year.”

An impressive list of over 35 boxing greats from the United States and abroad are scheduled to participate in weekend festivities including Mike Tyson, Miguel Cotto, Kelly Pavlik, Antonio Tarver and many more.