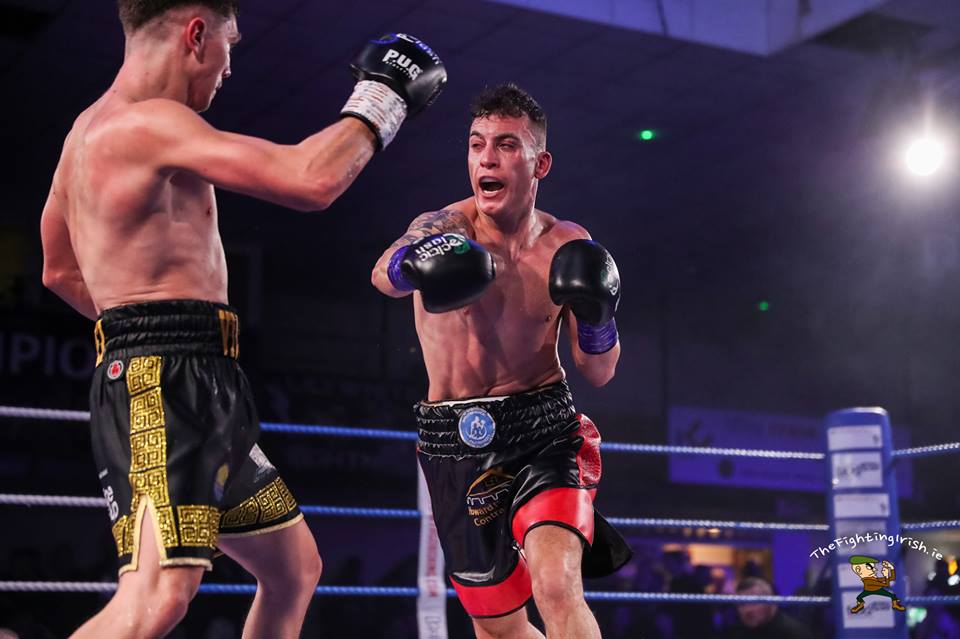 Jake Hanney lost a controversial decision last month on his long-awaited return to the ring – and he wants a rematch and revenge.

Two years after his last fight, the Dublin light welter jumped straight back into a massive fight, challenging BUI Celtic champion Victor Rabei at the National Stadium, LIVE on TG4 in the chief support bout of the big ‘Clash of the Titans’ card on March 30th. Hanney put in a monumental performance in a tense and close fight but was edged on a points decision after eight enthralling rounds.

The verdict caused plenty of debate – with former World middleweight champion Andy Lee, working as a pundit on the night, stating his belief that Hanney won, echoing similar sentiments expressed by light middleweight contender Spike O’Sullivan who was in the commentary box. The East Wall talent and his team all also felt that he should have got the nod and want a chance to set the record straight.

A rematch over ten rounds for the prestigious Irish title has been suggested and it is something which Hanney intends to chase, perhaps as the headline fight of the next big TG4 card, but first he will waste no time and return to the ring next month. It has recently been confirmed that the 29-year-old will feature on the Boxing Ireland Promotions ‘Celtic Clash 8’ card at the Devenish Venue in West Belfast on Saturday May 25th.

It’s an opportunity to get back to winning ways following the controversial defeat and Hanney has refused to let the result get him down. ‘The Wizard’ said “thanks to my team getting me out so soon. I am buzzing and can’t wait to put things right and make a statement. I should have gotten the result last month but we’re not waiting around! May 25th, we’re back. Even though we didn’t get the result I’m still buzzing and can’t wait to go again. I believe this is only the start of some big nights.”

Looking back at his clash with Rabei – a fight in which he started brilliantly, boxed smartly, but tired in the closing rounds – Hanney is able to use perspective.

The Inner-City Dub notes how “ring rust played a big part on my performance, but its eight rounds banked at top level and there’ll be none for my next one. I felt great, unbelievable, heading into the ring. I felt sharp as anything warming up but I wasn’t too happy with my performance. I had some ring rust, my timing was a bit out and maybe I wasted a bit of energy beforehand. I think you can put that down to not being in there for so long. It’s frustrating, but the positives from that are that it was the first one. That first one is out the way now and those problems won’t happen again.”

The Victor Rabei fight simply has to happen again, with Hanney being convinced that he was the rightful winner. He outlines how “the rematch is definitely what I want and, if he’s honest, I’m sure he does because, if he watched it back, I’m sure he will want it. on the night I knew I didn’t perform like I can so I knew it was close. I thought just shaded it and after watching it back I definitely won the fight. I wasn’t at my best but won the fight. I’d agree with Andy and Spike who both have said it to me after the fight they thought I won.”

“There’s some serious unfinished business to be had and, believe me, I can’t wait to taste it. The rematch we feel has to happen for the Irish title! We sort of had words on Facebook saying we would do it again so hopefully he sticks to that. I’d rather it sooner than later, but I’m only going to get stronger and stronger as time goes on and everybody will see that. Last month was only the start and this year is going to be a big year. We are getting stronger and better every day in the gym and May you will see it and it will set me up for big fight after it.”

Tickets for the night are priced at €40 (unreserved) and €50 (ringside) and include a bus which runs from Dublin to Belfast and back or online at universe.com. Jake Hanney can be contracted through his social media or by ringing directly at 085 743 8353.