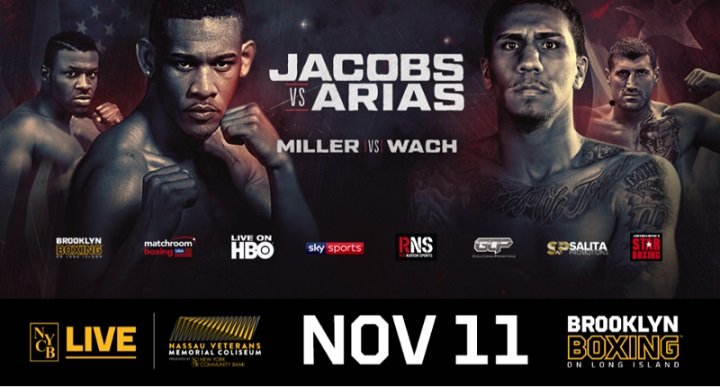 “It’s great exposure to be part of such a big event,” said Hernandez. “I want to be the guy fighting on TV and in the main event in the near future. Dezurn is a steppingstone for me and you can expect an action packed fight ending in a knockout.”

Undefeated Connor Benn (9-0, 7 KOs), from Essex United Kingdom, the son of former middleweight and super middleweight world champion Nigel Benn, will battle Highland NY’s Daniel “The Hudson Valley Kid” Sostre (13-14-1, 5 KOs) in a six-round welterweight contest. Benn has fought in some of the biggest venues in the world (O2 and Manchester Arenas); and on the biggest fight cards, (making pro debut on Martin vs. Joshua card, and also the Golovkin vs. Brock and Joshua vs. Molina events).

“New York here I come!” said Benn. “I’m honored to be the first Matchroom UK fighter to box on a show in America and it’s a massive chance for me to make a big impact in front of a new audience. I’m only 20, I love new experiences and I plan on making this a long journey.”

Undefeated New York City police officer Dimash “Lightning” Niyazov (12-0, 5 KOs) will fight in a six-round lightweight bout. Born in Shymkent, Kazakhstan and now residing in Staten Island, NY, Niyazov began boxing at 4 years old. At 13, his family moved to the United States and his father began boxing training in earnest. As an amateur, Niyazov won the NY Empire State Games and NY Metros. He became a member of New York City’s finest three years ago and is stationed in Brooklyn.

Shohjahon Ergashev (9-0, 9 KOs), Uzbekistan’s popular 25-year-old four-time amateur national champion will battle Marquis Hawthorne (5-7, 1KO) from Waco, TX, in a six-round welterweight bout. To prepare for his US debut, Ergashev, who has won his last five fights inside of round one, is training at Kronk Gym in Detroit with well-known Javan SugarHill Steward (nephew of legendary Emmanuel Steward).

“Shoh has the power, skills and charisma to be a star in boxing and has a very loyal fan base,” said Salita. “Hundreds of people from his community will be there to support him on November 11.”

Tommy Rainone (26-8-1, 6 KOs) from Rockville Centre, NY, will have a six round welterweight rematch with Mexican Fidel Monterrosa-Munoz (38-14-1, 30 KOs), inwhich Monterrosa-Munoz won by unanimous decision on July 15. While Rainone began his love affair with boxing at age seven when he saw the movie “Rocky”, he didn’t make his professional debut until age 26. With a loyal fans base that has continues to grow, Rainone won his first eleven professional bouts, including two wins in a five-day span and a third victory 15 days later.

“I’m Looking forward to this fight and I’m extremely humbled and blessed to get this opportunity for revenge with the same opponent at the same venue under better circumstances then the first time around,” said Rainone. “That loss has haunted me for months and I didn’t know if I would get the chance to make the wrong thing right.”

Long Islander Tyrone James (4-0, 3 KOs) from Elmont, NY, is carrying the torch of his athletic family and will fight in a six-round welterweight bout. Tyrone’s father, Derrell, was a standout professional football player and his uncle Jerry was a 1988 Golden Gloves champion. Tyrone started boxing at age 10 and went on to have an outstanding amateur career becoming a 5-time Junior Olympic [MG1] champion and Nebraska Golden Glove champion.

“I’m very excited to be fighting so close to home and on such a huge card. As soon as Joe DeGuardia called to offer me the opportunity I jumped at it,” said James. “I was at the first boxing card in July at the Coliseum and knew I wanted to fight there. It’s a great place for my family and friends to see me in action.”

Opening the action-packed HBO telecast will be super lightweight knockout artists Long Island’s own Cletus Seldin and Roberto Ortiz squaring off in a 10-round bout. In the chief-support bout, exciting heavyweight Jarrell Miller looks to stake his claim on a heavyweight title shot and in his way is Polish giant Mariusz Wach.

Jacobs vs. Arias and Miller vs. Wach are presented by Matchroom Boxing USA, in association with Brooklyn Sports & Entertainment, Salita Promotions and Roc Nation Sports. Seldin vs. Ortiz is presented by Golden Boy Promotions in association with Star Boxing. BROOKLYN BOXING on Long Island is an extension of BSE’s BROOKLYN BOXING™ brand. For more information, visit brooklynboxingshop.com.