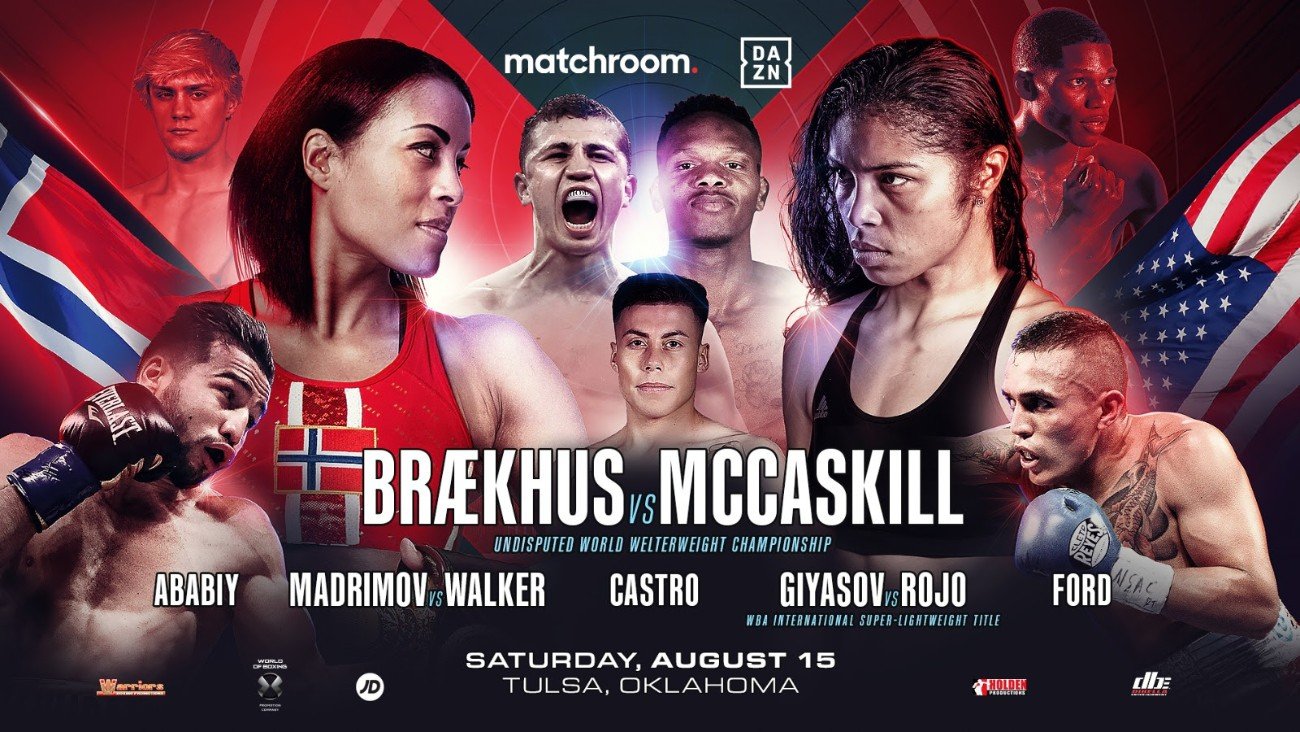 Israil Madrimov is looking to steal the show again to convince promoter Eddie Hearn to put on a huge show in Uzbekistan as he faces Eric Walker in a final eliminator for the WBA World Super-Welterweight title in the streets of downtown Tulsa, Oklahoma on Saturday night (August 15) live on DAZN.

Madrimov (5-0 5 KOs) has made an electric start to life in the paid ranks, leaving his decorated amateur career behind and winning a title in his first pro outing in November 2018 to signal his intentions.

No opponent has taken the Uzbek star into the seventh round after five fights, and while Walker (20-2 9 KOs) has arrived in Tulsa confident of stopping Madrimov’s march and adding to his own incredible story, ‘The Dream’ can take a giant step towards his goal of becoming a World ruler with victory.

Boxing is the number one sport in Madrimov’s homeland and they recently celebrated their first World champion when Murodjon ‘MJ’ Akhmadaliev became the unified Super-Bantamweight ruler in January with victory over Daniel Roman in just his eighth pro outing.

Madrimov still has ambitions to beat his ‘brother’s’ record and aim to unify at 154lbs before eight fights, targeting a future clash with the winner of the September unification battle between IBF and WBA Super champion Jeison Rosario and WBC king Jermell Charlo, but winning a World title is the key, and if that can happen in Uzbekistan, the 25 year old believes it would be a historic night for his country.

“There have been talks over doing an event in Uzbekistan with Eddie Hearn, and it’s easier to do now with MJ as a World champion, it would be a huge event,” said Madrimov. “Our people are crazy boxing fans and would fill up any venue in the country, we have support from the government, so I am sure that it would be a sold-out stadium success and people would remember it for years.

“MJ made history and we’re happy for him as our friend, brother and teammate, it’s unbelievable what he achieved, unified champion in eight fights – but I still have time to beat him!

“Right now, the focus is Eric on Saturday, not looking past that. As soon as business is taken care of, we move on and we want to fight the champion, whoever that is. Rosario and Charlo are fighting each other, whoever has the belts I’m ready to fight them.

“Every fight for me is very important. I started off with a title fight on debut and my last fight was an eliminator, so they are all important and they keep getting bigger. This is a final eliminator and that’s big for me because win this and the next fight should be for a World title, the champion cannot avoid me then. I don’t call people out, I just want to be in a position to fight for titles. I want to build my own legacy and history by becoming World champion and I want to break records.”

Israil Madrimov is looking to steal the show again

Madrimov (5-0 5 KOs) has been knocking on the door for World title honors in the Super-Welterweight division and can send a fresh warning to the champions at 154lbs in just his sixth pro outing following a blistering introduction to the paid ranks.

The 25 year old looks set to replicate his habitual title winning exploits in the amateur code in the pro game, and ‘The Dream’ is confident of making it six KO wins from six when he goes toe-to-toe with Walker in Tulsa.

“I’m very excited to fight on August 15 against such a formidable opponent in Eric Walker,” said Madrimov. “Many thanks to all of my fans worldwide for their support, I can’t wait to put on another great show for you.”

“We were initially planning to bring Israil back around September, but this opportunity came up and we all decided that this is a great step for his career,” said Vadim Kornilov, Madrimov’s manager. “We’re looking forward to a bigger test here with Walker then with previous opponents.”

“This will be another great performance by Israil,” said Andrei Ryabinskiy, World of Boxing Promotions. “His popularity is growing, and we are very happy working with Matchroom Boxing and DAZN, keeping him busy and moving another step forward on August 15.”

For Walker (20-2 9 KOs) the opportunity to derail Madrimov’s rise and catapult himself into the upper echelons of the 154lbs division gives the 37 year old the chance to write yet another chapter of a remarkable life in and out of the ring.

The Louisianan has forged a career in boxing from unlikely beginnings, learning to box in prison as a teenager and then making a bright start to his pro career and won 15 of his first 16 fights before entering ‘The Contender’ in the fall of 2018, where he fell to Brandon Adams in the semi-finals.

Walker enters the bout on the back of two wins in the final third of 2019 and the ‘Baby Faced Assasin’ heads to Oklahoma full of confidence that he is the man to end Madrimov’s run.

“Madrimov had a great amateur career but, as a pro, he makes a lot of mistakes and I’ll be the guy to give him his first loss,” said Walker. “Despite the restrictions from the pandemic, I’ve been training and staying in shape. I’ve been in the gym since May and I just got back from sparring with Shawn Porter. I’ve been waiting for an opportunity like this, my mind is focused, and I’m ready to take care of business on August 15.”

“Eric Walker is a legitimate 154-pound contender and will be the best fighter that Israil Madrimov has ever faced. Since turning his life around, Eric has reestablished his career and was a star on the last season of ‘The Contender’. I expect a terrific, competitive fight on August 15 and look forward to watching it on DAZN,” said Lou DiBella, President of DiBella Entertainment.

Madrimov vs. Walker has been added to the August 15 bill after WBC World Flyweight champion Julio Cesar Martinez was forced to withdraw from his defense against McWilliams Arroyo through a non-COVID 19 related illness, with Matchroom aiming to place the bout on a card later in the year.

“Madrimov vs. Walker is a great addition to our August 15 show,” said promoter Eddie Hearn. “Israil is one of the standout talents in world boxing and he’s on the cusp of World title glory after just five fights in the paid ranks – a remarkable achievement.

“But Eric has already shown he has all the ingredients to beat the odds time and time again, and I know that he will lay it all on the line and provide Israil with the sternest of tests.

“Brækhus-McCaskill is a fight fit to top any bill and while it’s sad to lose the ferocious Mexican champion Julio Cesar Martinez from the show, Cecilia and Jessica more than deserve their spot as the main event – especially at a period of time when women’s boxing is on fire and in the spotlight, with the winner in Tulsa looking to take on the winner of the crunch rematch between Katie Taylor and Delfine Persoon, taking place a week after we return in America with a huge night of action in a stunning setting on the streets of Tulsa.”

Brækhus-McCaskill and Madrimov-Walker are the show toppers of a massive night of action in the unique setting of the downtown Tulsa streets as Matchroom return Stateside.

ABABIY: I CAN BE A YOUTUBE STAR AND WORLD CHAMPION

Nikita Ababiy wants to rule the world in and out of the ring as he gets ready to return to action on the streets of downtown Tulsa, Oklahoma on Saturday night (August 15) live on DAZN.

Ababiy (8-0 6 KOs) was one of Eddie Hearn’s first signings in America and the colorful Brooklyn talent made an instant impact at the launch press conference for DAZN and Matchroom in New York and was an instant hit after both falling over his words on the microphone and owning it on his YouTube channel.

‘White Chocolate’ has certainly not stuttered in the ring, plundering eight wins and six inside the distance since his debut in October 2018, and with each fight week his confidence at press conferences is on the rise too.

The 21 year old is keen to forge a career outside the ring as a social media star, building up his YouTube channel and growing his presence on all other outlets, and having spent time with TikTok sensation Tayler Holder in Los Angeles following his last win there in November and believes he can be a social media star and a champion in the ring at the same time.

“I always had a fear of talking to the camera and still do in a way, I get a bit jittery,” said Ababiy, who meets Jarvis Williams (8-2-1 5 KOs) over six rounds in Tulsa. “But when you post something, you get good feedback and it motivates you to do more and you take it more seriously. I am going to be a World champion, multiple time, and a YouTube star – I can do it, so why not be both?

“I love the idea of having a camera and recording stuff, when I watch YouTube videos I never watch as a fan, I watch to learn because I thought that everything that they do I can do. I just never had the money or the platform to know where to start, I guess I didn’t have the confidence either. I can fight in front of 10,000 and I’m cool but talking to 50 people and two or three cameras is scary to me – I remember that first press conference was the scariest moment of my life, the scariest by a long way.

“Eddie Hearn has given me an amazing platform and a big audience, so why not use that to skyrocket my YouTube channel? I have a close friend in Tayler Holder, he reached out to me on Instagram before I turned pro and said he loved what I did and saw something in me.

“When I fought in LA in November after I won he invited me to live with him for a month there, introduced me to a bunch of people and it was an amazing vibe – but I was really nervous, I am just a kid coming up and everybody I saw from the internet was just hanging out with me like it was normal, it was really organic and natural and we all got along and accepted me.

“It’s been eight months since I’ve been in the ring and to be able to get back in is great, and to have this exposure on the first big show back here in Tulsa is great, and an opportunity I want to take advantage of.”