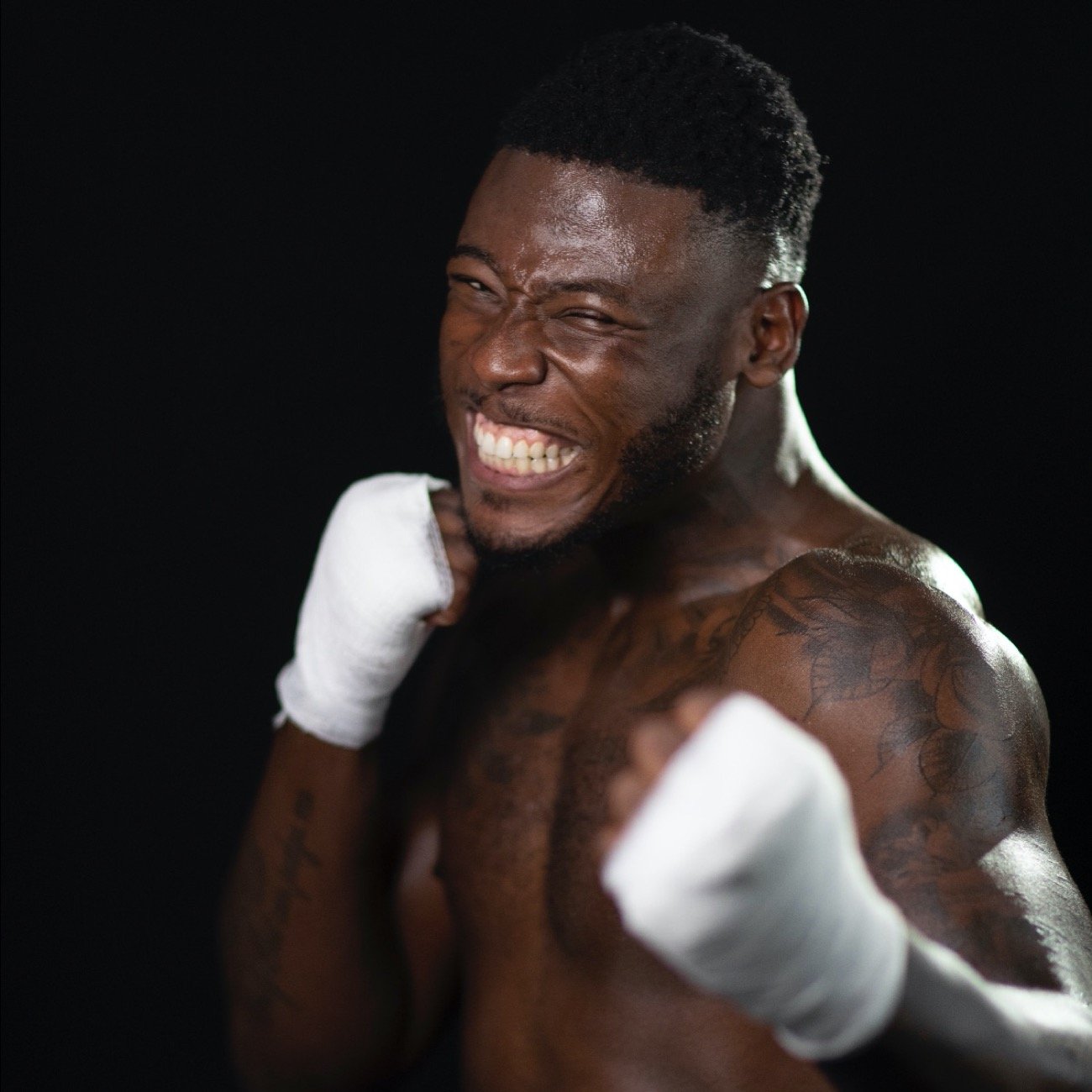 Putting his signature to a long-term deal with leading manager-promoter Mick Hennessy should finally provide the structure for Brixton cruiserweight Isaac Chamberlain to fulfil his unquestionable ability.

Hot off a knockout victory just under two weeks ago, Chamberlain makes a quick return to action this Saturday night in Wakefield when he takes on Matt Senn, live on free-to-air Channel 5.

At 6ft 2in tall and blessed with a 78in wingspan, ‘IC’ has always possessed the physical hardware and technical slicks to mix with the division’s elite. However, contractual discord caused his career to meander aimlessly.

After a 22-month exodus from the public eye, the chiselled 26 year old delivered a timely reminder of his talent, kickstarting his association with Hennessy by levelling Wolverhampton warmonger Antony Woolery for the full count with a frighteningly explosive volley, live on Channel Five a fortnight back.

And with mentor Mick able to guarantee live terrestrial TV, the affable south Londoner can finally visualise a pathway to the hallowed green WBC belt he has long considered his destiny.

‘Twelve months from now, I expect to be somewhere around the world top ten,’ states ‘Chambo’ who registered the fifth stoppage of a 12 fight career that has stretched five and a half years.

‘Returning after 22 months was very difficult. You have to get the feel for the canvas, the lights, the pressure again. I felt I could’ve done better but Mick Hennessy and Channel Five were both very happy. Apparently, the viewing figures peaked for my fight and I got thousands of new Instagram followers. I’m now up to 145,000.

‘I was just happy to be fighting again, very grateful to Mick and Channel 5 for the opportunity. The stoppage provided evidence of what I’ve been working on with (coaches) Rasel and Bobby. Power! I’ve always had a very efficient, snappy jab but I looked and felt very explosive.

‘Finally returning to the ring was a huge weight off my shoulders but I’ve always been the type of person to ask ‘What next?’ rather than dwell on past glories. Now I can’t wait for what the future holds, to show further what I’ve learnt from my training camp; how I’m preparing myself better, getting everything to run more smoothly when I’m in the ring.’

It’s hard not to root for this most humble, affable yet frighteningly focussed fighting man, who survived a single-parent childhood – eldest of seven – that saw him inadvertently serve as a ‘drug mule’ on some of south London’s most savage estates.

‘It has been difficult but these hard times will soon pass,’ claims the ‘Gloves Up, Knives Down’ ambassador who was recently dubbed ‘the most interesting boxer in Britain’ by award-winning journalist Donald McRae.

‘You just need to stay diligent and graft away. That in itself builds character and I’m made for it. I was always prepared to put in the hard work when there were no fights on the horizon so imagine how driven I am now that I’m promised a televised fight every month.’

There is a consistent commitment to self-improvement that raises Chamberlain above the hordes. Barely out of his teens, he challenged himself in savage spars against the globe’s heavyweight hardcore – Joshua, Wilder, Whyte, Usyk – often on foreign climes.

He was just 22 and fighting for a sixth time when he captured the Southern Area title in 2016 and, four fights later, headlined at London’s O2 Arena only to suffer from stage fright. Beaten by Olympian Lawrence Okolie (pts 10), Chamberlain then imprisoned himself at a $15 a night hostel in Miami to work under Cuban coach Jorge Rubio – an association that ultimately ended in disappointment.

David Lemieux, Arslanbek Makhmudov back in action on Oct 10

‘I’m not exactly sure where my desire and drive come from but I definitely have it. I didn’t really have male role models growing up. Bettering myself was just something I had to do. I guess my mentality was a bit naïve. I was always ‘Chase Your Dream,’ he explains.

‘Initially, I wanted to be a chemical engineer but, from the moment my mum took me to the boxing club for protection after my cousin was stabbed, I was just so in love with it.

‘My philosophy is to master each day at a time. Conquer the day. After you conquer Monday, you conquer Tuesday. When Tuesday is conquered you attack Wednesday and Thursday.

‘Every obstacle in life is there to test you. But for anything to be worthwhile you have to go through a number of obstacles to attain it. I constantly strive to be a better athlete and a better human being. At elite level, all the top contenders are tough, smart, strong but I’m banking on my consistency taking me above them. I’m obsessed with getting better.’

‘Expect another relaxed showing,’ predicts Isaac who already has dates lined up for November and December.

‘I’d like another explosive, spectacular knockout to confirm how my power has developed but, as long as the fans enjoy it, I’ll be satisfied.’

The skilled and sturdy 6ft 2in Brixton boy spent his early years trapped in the gang-infested, gun, knife and drug riddled Loughborough and Angell Town estates of London SW9 – a red zone on the Met Police’s Gang Matrix – where, too often, the elderly outlive the young.

Twenty-six year old ‘Chambo’ claims that only boxing rescued him from a cell or a cemetery so is now committed to using his profile as a stand out athlete to rescue troubled youngsters as an ambassador for the ‘Gloves Up, Knives Down’ initiative.

‘Just because you grew up in the ‘hood, doesn’t mean you want to end up there,’ philosophises ‘IC’.

‘The boxing gym saved me, helped me forget. You drift in and out of street life – you instinctively follow what your friends are doing and street life was always part of that – but thankfully I was never too heavily involved.

‘Those streets definitely toughened me mentally for life as a pro fighter I guess but the streets are nothing compared to the discipline that’s needed to succeed against another trained fighter inside the ring. That brings another level of respect entirely.

‘‘Gloves Up, Knives Down is something very dear to me. I give talks, visit schools, and preach that nothing positive ever came out of ‘road life’. The streets bring easy money. Drugs and guns are the easy way. Any mug can pull a trigger, far harder to challenge your skills and character against another trained man. The discipline needed to be a successful boxer is a far harder but far more rewarding road.’

Chamberlain might rue the harsh hand that fate dealt him in his early years but those sinister south London streets certainly instilled an inner steel that has been a constant throughout his stop-start paid career.

‘In just my fifth fight, I broke my rib against Russ Henshaw (then 6-0) but dug in to stop him in round six,’ recalls ‘Chambo’ who has yielded just once in a five year 11 bout pro career.

‘After that, I fought with a dislocated shoulder from round three against Wadi Camacho but went 10 very hard rounds to win the Southern Area in only my sixth fight. I was only 22 at the time fighting big, fully grown men.’

‘My last win over (ex Commonwealth king) Luke Watkins was a weird one cos I actually thought I was well in front, cruising, and only pressed for the knock out to entertain the crowd, rather than salvage the fight. (A last round knockdown saw ‘Chambo’ edge a 95-94 verdict). I was amazed to discover the win depended on that knockdown. I finished every round stronger and thought I’d won at least six, easy.’

Even in his solitary setback – to 2016 Olympian Lawrence Okolie at London’s O2 Arena in February 2018 – Chamberlain’s resilience was beyond reproach, even if his silky skills temporarily went AWOL.

And the Brixton bruiser believes it’s his proven ticker and tenacity that will ultimately take him to the top of Britain’s hugely competitive cruiserweight crop.

‘My knee was ruined after Okolie first pushed me down in round one but I still slogged through on the adrenalin. It was only 20% of me in there,’ insists affable Isaac.

‘Though others in the division say they want it more, I’ve already SHOWN I want it more. That’s the difference. You can measure height, weight, reach. You can’t measure heart!’