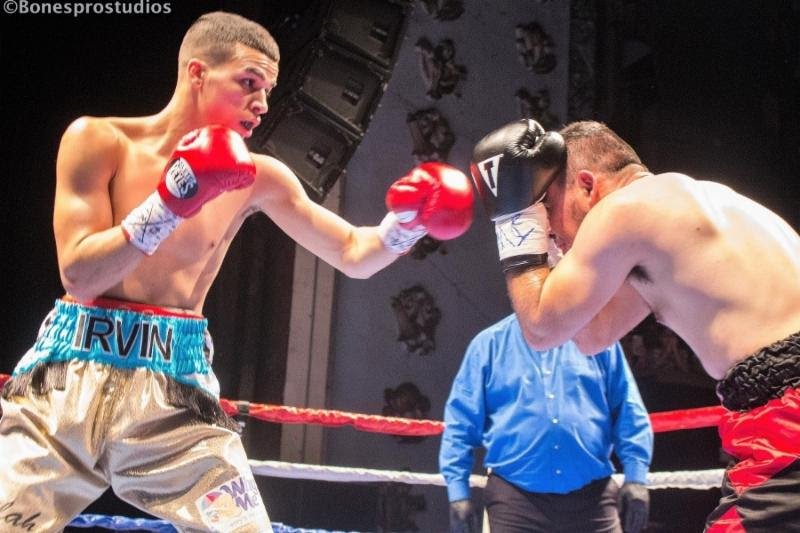 This Saturday night’s “Fight Night at The Zone”, presented by Granite Chin Promotions, has been strengthened by the late addition of hot prospect Irvin Gonzalez to a card already showcasing some of the best young, professional boxers in New England.

Granite Chin Promotions is on a mission to establish a fan-base in the Granite State, providing a fan friendly, full entertainment experience at The Sports Zone in Derry, New Hampshire.

Gonzalez (8-0, 7 KOs), fighting out of Worcester, MA, was a 2015 New England Golden Gloves champion, who qualified for the 2016 Olympic Trials. The 21-year-old featherweight prospect will face Mexican Francisco “El Mono” Medal (12-12, 8 KOs) in a six-round bout.

Gonzalez, who hasn’t fought since December 1 1 (sensational third-round knockout of previously undefeated 13-0 Marlon Olea in Providence), was supposed to fight St. Patrick’s Day in Boston, but he was informed the day of the weigh in that his opponent hadn’t cleared medicals.

I’m always in the gym working hard because I like to stay busy and be ready,” Gonzalez said. “No layoffs for me. I’ve been sparring 3-4 times a week to polish my craft. I’m always prepared. I was disappointed a few weeks ago, but I’m fighting on this card, and back on the right track.

The addition of Gonzalez with a card featuring some of tomorrow’s stars such as Hartford, CT light heavyweight champion Richard “Popeye The Sailor Man” Rivera (6-0, 5 KOs) means two of the top three prospects in New England will be in action this Saturday in Derry. And several other promising boxers will also be in action. Rivera faces Randy “The Rattler” Campbell, of Ohio, in the six-round co-featured event.

“We are happy to have Irvin on our show,” co-promoter Chuck Shearns said. “His last fight fell out and we are always happy to help local fighters, especially someone of Irvin’s caliber. We have five undefeated fighters on this show. They’re legitimate prospects with a lot of upside. Irvin, Richie and Omar are starting to get national attention and New Hampshire fans are getting an early look at them. The veteran fighters on this show have a lot to fight for as well. ”

Iraq War veteran Chris Traietti (25-4, 20 KOs), fighting out of Quincy, MA, meets Indiana veteran “Jammin'” James Morrow in an eight-round, non-title fight. Traietti, whose title will not be on the line, is also the co-promoter of “Fight Night at The Zone.”

Tickets, priced at $60.00 (ringside), $45.00 and $30.00, are on sale and available to purchase at www.ticketriver.com. Tables with wait service are also available for $400.00. Half-priced tickets are available for active members of the military, police and fire departments.